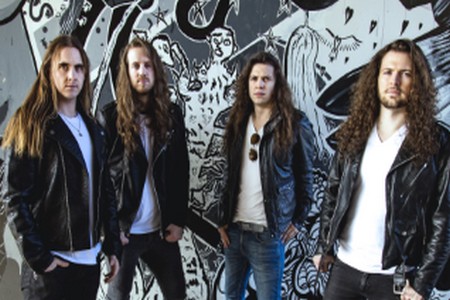 Dead Rhetoric: How is the current tour of Europe going with Brainstorm and Primal Fear? Considering all of your previous touring escapades in Europe, do you feel that Striker is closing in on more of a headlining status in those countries?

Brown: We landed in Frankfurt yesterday and we are just headed down to Barcelona for the first show of the tour! I think this tour will be the best one we’ve done yet. We are huge fans of Primal Fear and they have definitely earned their headlining status. We’ve done a few headlining tours in Europe before, not to the same scale, but I think we are going to have some really great opportunities coming our way in the next year. Already working on booking a second European tour later this year and all I can say is it’s going to be fun!

Dead Rhetoric: How would you describe the personalities and strengths of each band member within Striker? And do you share in the business/management responsibilities, or is this where you’ve been able to spread things out a bit more for the band to concentrate more on the music?

Brown: Everyone has their own roles in Striker. Now that we are independent there is more than enough work to go around, and everyone helps out with what they can. It’s pretty fun though, if someone has a good idea they run with it.

Dead Rhetoric: Originally you were scheduled to be a part of the Artillery/Onslaught North American tour package in the fall of 2014, but had to pull out – eventually doing some spring dates with Artillery the following year. Can you explain to the readers the difficulties that sometimes occur when it comes to advancing these tours and pulling off all the logistics to properly fulfill these obligations? Are you hoping to do a longer North American tour in support of this new record?

Brown: Actually we will be announcing a new North American tour in a few days! Looking like about 40 dates from April through June. Booking tours can be extremely difficult. You have to organize 3 – 5 bands, work visas, back line, transportation, hotels, etc. Most people are totally fucking clueless when it comes to touring and just assume it’s a vacation. It’s hard work, we bust our asses to get out on the road, same with the people working with us. Just getting the shows lined up can take months, not to mention applying for work visas or booking flights. We often will have a few days on tour that are 24+ hour work days too and there’s often no way around that. Then on top of that you need to watch out for scumbags preying on bands, which unfortunately happens all too often. We really wanted to do that Artillery/Onslaught tour but you need to protect yourself out there.

Dead Rhetoric: How would you describe some of the most memorable fan encounters through the years? And who have you felt fortunate to spend time/hang out with as far as musicians that you admire or possibly influenced you?

Brown: First and foremost, it was really cool to have Randy Black doing drums on our album! We also opened for Metallica 2 nights in a row at our home arena in Edmonton to sold out audiences, that was a mind trip! Reading the morning newspaper with Lars Ulrich… Who’d have thought that would ever happen? Our fans are all our friends, and we always take time to get out there and make new friends and just have fun. It’s all about making friends in the end, getting out there and connecting with people.

Dead Rhetoric: If you were in charge of keeping the metal scene alive, what tools and resources would you use to best serve the listening public and ensure its vitality?

Brown: As shitty as it is to see our unreleased album on torrent sites before the album even comes out, especially now that we are independent, the reach and capacity of the digital medium is the biggest tool moving forward for the music industry. It can expose your music to literally anyone with an Internet connection, which is practically the entire world. With all that free music floating around though, people can’t forget that that music still has value, and musicians and artists dump all their savings and time into recording and releasing music. As a fan, if you like something, you need to go out and support it. If you don’t you are killing the industry and are slowing down or altogether stopping your favorite bands from recording and touring. It can be disheartening at a show when someone wants to buy your CD but doesn’t want to pay for it, and tells you that they’ll just torrent it instead because they think ten bucks is too much for a CD. Trust me, I’d love to cut you a deal, but I’m rationing week old pizza in fifteen year old tour van that runs on luck, hope, and prayers.

Dead Rhetoric: How do you define success at this point?

Brown: Success for us is just being able to follow our dreams. We love being on tour and making music and we just want to be able to pursue that full time. We don’t want to have to wait years between putting out albums or go out on tour only once a year, we want to always be doing something. Success is different for everyone though.

Dead Rhetoric: How do you see the next 12 months playing out for Striker in terms of touring, promotional activities, videos, special releases, etc.?

Brown: We have our Euro tour running Feb 5 to March 6, after which we fly to Mexico for another short tour down south. After that, we have a pretty massive North American tour in April, May, and June, and have started planning a second Euro tour for late 2016. We will be releasing lots more fun videos and other things too throughout the year, and will hopefully have some new music out before the end of 2016 too! It’s going to be a busy year that’s for sure. Hopefully can tour in Japan or Australia somewhere in there too!