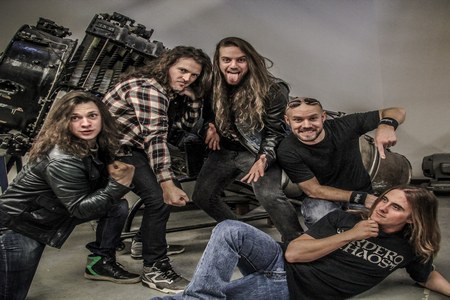 Hailing from the land of harsh Arctic winds, brutal winters, and a bevy of ice hockey talent, Canada’s Striker have been making their presence felt with their brand of old school oriented classic/power metal. One look at their official Facebook page and under influences you’ll find some deep bands not on your normal list. Racer X. Vicious Rumors. Exciter. They are aware of the uphill climb, but they are gaining a lot of traction in mainland Europe, where over the course of their previous two albums they’ve toured four separate times.

It also helps to receive great advice and insight from some of the best producers in the business, and their latest record City of Gold is no exception. Recorded at Studio Fredman with Dream Evil guitarist Fredrik Nordström, they’ve gained a heavier and more modern sound, while not sacrificing their known power riffs, twin guitar elements, and melodic propensities.

Prior to the release of the record I had the chance to speak with vocalist Dan Cleary, who has an easy going nature to his band’s work and accomplishments. Prepare to learn more about our neighbor to the north, bricks of metal vinyl, and favorite/not so favorite moments of the animation series staples The Simpsons in this fun chat.

Dead Rhetoric: What are your early childhood memories of music in general – how did you make the progression into heavy metal and then eventually wanting to perform in your own original band?

Dan Cleary: Ha ha. I think the earliest I remember is my dad had this vinyl record of Dire Straits, the album with the song “Money for Nothing” (Brother in Arms). I remember listening to that and doing some air guitar to that when I was really little, maybe like 10 years old. I started getting into playing guitar, from there I got into heavy metal because that’s the kind of guitar playing I liked the most. And then from then, we formed (Striker) when we were in high school just because we thought it would be a fun thing to do, that’s pretty much it.

Dead Rhetoric: How did you come to choose the Grim Reaper cover “You’ll Wish That You Were Never Born” off the often neglected third album Rock You to Hell for your Road Warrior EP in 2009?

Cleary: We just wanted to do kind of a less conventional cover track I guess. We were pretty big on Grim Reaper at the time and so we decided to do a cover of it.

Dead Rhetoric: Tell us about the latest round of lineup changes, as you have a new guitarist in Timothy Brown and bassist in William Wallace; what necessitated these changes in between your last album Armed to the Teeth and the latest release City of Gold (as former bassist Dave Arnold recorded the album with you, correct)?

Cleary: What happened was for Ian (Sandercock) our original guitar player, he basically got married and moved (laughs). That’s the gist of it, we had hit a lot of milestones as a band, especially opening for Metallica in our hometown, he was musically satisfied and moving on to different things. Dave it was a similar kind of thing, he felt like it was time to move on to something different. We are all still really good friends, so it wasn’t any hard feelings or no one got kicked out of the band. William and myself played together in a band a long time ago called Vinyl Spine, I think there are some songs still kicking around from that band on Myspace, if that still exists. So we were together in a band in high school, and then Tim and Adam (Brown) our drummer now used to play together in band that we used to play with a lot called Sixguns, so we’ve known both of those guys for our entire musical careers. It was the glove fit kind of thing.

Dead Rhetoric: What would you consider the highlights of your previous two albums Eyes in the Night and Armed to the Teeth? What do you think you’ve learned the most from those two recordings that makes your new album City of Gold that much stronger?

Cleary: The first Eyes in the Night was a pretty eye opening experience. We worked with a guy locally who’s in a band called White Wolf, Cam McLeod and he taught us a lot about the music industry in general, a lot of good advice for us. The second album Armed to the Teeth we did with Michael Wagener, who has sold like 100 million albums worldwide. He had a lot of advice for us, which made this album more confident in terms of how we wanted to sound and what we wanted to do. We just sort of went after it.

Dead Rhetoric: You recorded City of Gold in Sweden with Fredrik Nordström (Dream Evil guitarist, infamous metal producer). Tell us how the recording sessions went, and how you feel producers like Fredrik and Michael Wagener (who produced Armed to the Teeth) improve the overall Striker final product?

Cleary: The recording was awesome, but it was definitely a different feel. At Studio Fredman we stayed in a room basically connected to the studio. Even when they are there during the day, at night they were more than happy to let us go in and record. Chris (Seeger) and Tim spent a lot of time writing guitar solos, not eating up all of their time. What Fredrik did for us is give us that sort of modern sound which we thought would be cool because we do this sort of old school metal sound but we wanted it to sound like a new album, if that makes sense.

Dead Rhetoric: Yeah, the thing I noticed about the new record is definitely seemed a little more energetic in the sense of thrash influences or speedier in the drum department as well as the guitar attack compared to the previous album.

Cleary: Yeah, we definitely set out to make a heavier album, we’ve had some thrash elements before but never as much as on this record. We are all big into thrash but we have elements from all over the place as far as metal goes. Mostly because we have been playing live a lot, especially in support of the last record, and some of the faster/heavier songs end up being more enjoyable to play in a live situation.

Dead Rhetoric: Did you record specifically in Sweden because you were coming off of a European tour around the end of 2013?

Cleary: Sort of. We knew who we wanted to record with, we had a couple of people in mind but we decided to go to Studio Fredman because we were over there already. We spent Christmas on a bus in Sweden, so that wasn’t so glamorous (laughs).

Dead Rhetoric: I heard two of the band members ran into Mikkey Dee (Motörhead drummer) at Rockbaren while in Sweden, tell us about this event…?

Cleary: I didn’t go out with them that night. They went out that night and had some drinks with him. I guess he is a regular there, so it’s sort of a thing to always see him there when he’s not on tour, it was pretty cool.

Dead Rhetoric: Are there particular qualities or trademarks that need to happen from the initial riff or melody stage into the finalization of a Striker song?

Cleary: I don’t think so, I don’t know if we have a trademark sound. We just do whatever we want musically and we haven’t had too much backlash yet.

Dead Rhetoric: Were there any particular songs that seemed challenging or possibly different on the new record from either a recording or songwriting standpoint?

Cleary: A lot of it is pretty straightforward. We did get to explore different types of songs, one that is more in the vein of The Scorpions with “Bad Decision”, and even “All I Want” is more of me singing in a different style, which was pretty cool.

Dead Rhetoric: Hailing from Edmonton, Canada, how would you describe the metal scene in your area, especially in comparison to the thriving cities of Toronto, Montreal, and Quebec City?

Cleary: It’s definitely not as big, but it’s still decent. There’s a lot of trade work, we have a big oil industry so people are into metal in general. All the shows, all the bigger shows are well attended. When we play here we tend to get a really good turnout. I always wonder why the bands skip Edmonton because they go from Calgary through Vancouver.