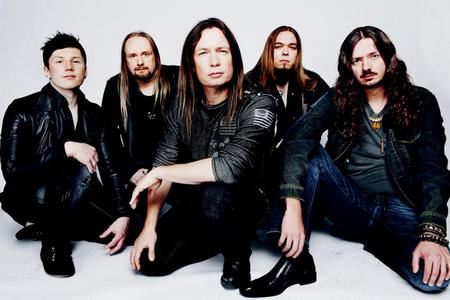 Dead Rhetoric: What was the atmosphere like in the band back in the mid 1990’s when Jens and Jorg first joined Stratovarius? I’ve heard they didn’t even meet each other until the first full band photoshoot…

Kotipelto: Could be true. I think Jörg didn’t even know who Jens Johansson was until we told him he used to play with Yngwie Malmsteen. Of course I knew him because I was an Yngwie fan. I still remember what Jens said at the airport, he learned some stupid Finnish, very bad language words of course. When I met him I knew we were going to be on the same level, as Scandinavians we have this very weird sense of humor. Even though he lived in New York for 12 years – I don’t remember if we recorded our parts before we took that photo shoot together. I don’t remember the running order. This was a big change. A couple of years before I had joined the band, almost like a dream coming true because I was singing the kind of music I had wanted to sing. At the time there wasn’t any other melodic metal band in Finland who did this kind of music. I was lucky to be at the right place at the right time. When Timo fired the other guys from the band, he and I and the bass player… he already had a plan. He told me he was going to get Jens Johansson I said ‘ah ha…we will see how this goes.’ All of a sudden he was in the band, and this was great. We did the Episode album and all of a sudden we were touring everywhere, South America, big tours in Europe. Everything went very fast during these years, a lot of gigs and albums every year, a very fast pace.

Dead Rhetoric: Looking back to the Episode through Destiny discography, did you realize how important those records were to cement the status and reputation of the group?

Kotipelto: At the time we had no idea what we were doing in that way. We thought we have some nice songs, we had no idea if we would be after 18-20 years still be talking about those albums or playing those songs. We had no idea. If somebody had asked me back then if I was still going to be singing power metal after 20 years I would have told them I don’t think so. Here we are, I’m honored that these albums inspired a lot of younger musicians to form a band and start making music.

Dead Rhetoric: Was it exciting for you to go back last year and play the Visions album on a short tour in its entirety?

Kotipelto: It was very exciting. We had played half of the songs live, but for sure we had never played everything with Rolf and Matias. I’m not sure if even Jens and I had played all of the songs live before. In the beginning when we had the idea, the situation was we were thinking if we should start recording. We didn’t have the songs together, so how about playing some special shows? We are not the only band that has done this, playing a full album, for us it was the first time to do this. We didn’t know if any people would come to see us playing that album, then suddenly a lot of people saw the show in Helsinki. We didn’t want to sit on the sofa. It was fun and great to have comments a few months later from old fans who saw us playing at the end of the 90’s on the Visions tour and they were thinking that we couldn’t play the songs anymore. They came back to say, ‘Damn- that was good!’ so it surprised me that they were skeptical because I think we are playing better now than ever. This is great, because we have been slowly trying to get the trust back from the old fans. Now it seems that we are doing things right, the music that we like as well as the old fans and new fans like.

Dead Rhetoric: Has everything that you have to do in Stratovarius helped a naturally shy person become a bit more outgoing as your career moves forward?

Kotipelto: Maybe a little bit, but I still don’t like publicity for publicity. I understand I have to do the interviews, and then of course there are music videos. I am fine with anything that is related to my work. When it comes to my private life, or when I go to a bar with my friends then I don’t feel comfortable when people are staring at me. In Finland it doesn’t happen to me that much, I am not an A-list celebrity. This is my job, every time I am on a stage I am fighting my shyness. I never really enjoy being in the center of attention. It’s easier for me nowadays, it’s not super natural, let’s put it that way.

Dead Rhetoric: Is it a sad state of world touring affairs that most foreign bands can get into Canada easier than they can the United States? Because it’s not like you don’t want to embark on a proper North American headlining tour these days…

Kotipelto: I think the problem is at least in the US the working visas are so expensive. If you think about it we are like five guys, there is a crew of four more, so then you are already spending thousands of dollars. We have done two proper tours in North America, we have played much more in Canada in comparison to the US. We have had a lot of success in the French-Canadian side, we were just there last fall. I hope we could do a proper North America tour. It won’t happen this year because we have the rest of 2015 booked but then it would be nice to do some gigs there next fall.

Dead Rhetoric: What’s left for Stratovarius to accomplish in terms of career goals? Are you aiming to hit new lands as far as performances?

Kotipelto: We’ve been touring in quite a few lands in the past, but we’ve never played in the Philippines, or some other countries in Eastern Asia. It was an interesting thing when I went to see Facebook hits from which countries they are coming from. A lot of people liking our page from Vietnam and Bangkok, Thailand. We’ve also had a lot of hits from Mexico, where we have played. It would be interesting to go, I’ve been to those countries but only as a tourist person. We’ve never played in India, we’ve gotten some offers but because of logistics it hasn’t worked out. I am very satisfied with where we are at right now, it would be nice to sometimes have an even bigger production, but I can’t complain.

Dead Rhetoric: Will there be a third Cain’s Offering album considering the acclaim for the previous two?

Kotipelto: Good question! We do those albums every six years (laughs). Let’s see, but somebody asked me when I was going to do the next solo album, because the last one was in 2007. Ages ago… maybe I should do my fourth solo album first and then after a couple of years there would be another Cain’s Offering. It’s still so fresh, the last album. I like the stuff, Jani Liimatainen is a great guitar player and a good composer.

Dead Rhetoric: What types of activities/hobbies help you recharge the life batteries so to speak?

Kotipelto: I do some reading and like to watch Netflix series. I like going to the gym…spending so much time recording vocals in the studio. First I did Cain’s Offering in the spring, then (the) Stratovarius album, and a lot of interviews. Hopefully I get back into shape pretty soon as you need good conditioning for touring. I just finished Daredevil and I even liked House of Cards which is brilliant. I think the first season was better than the second one. There are a lot of great series on Netflix these days.

Dead Rhetoric: What does the next 12 months look like as far as touring, videos, promotion for Stratovarius?

Kotipelto: I don’t know the date, but very soon there will be a proper video for “Shine in the Dark”, and even one more proper video for another song. All of them are already filmed, an international production, we played on this very rocky island, 30 kilometers at the front of Helsinki. That should be out in the next few weeks. We are going to start in Finland in two weeks, one festival gig in Norway. Then the rest of the tour of Europe starts in Estonia, and that will be six weeks. We were not supposed to do anything at the end of this year, but there are some possible plans to do some gigs in South America. We may go at the end of January, but these are not confirmed. The booking agent is working on it. You know how it is… at the end we will see what is actually happening.