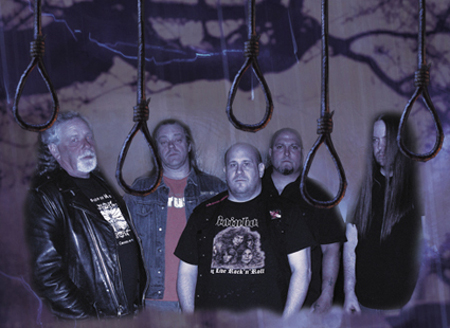 Dead Rhetoric: You continue to work with R.I.P. Records – tell us about your relationship with the label through the years for both Skullview and Stone Magnum? There must be a serious bond and commitment to the cause that keeps both parties satisfied, correct?

Tavernier: Yeah, there is a long history between RIP and myself.  Of course, RIP was with me since the beginning of Skullview back around 1995, if I remember correctly.  We were friends, and when he started taking the label off the ground Skullview was one of his early releases and we continued on to do three records on RIP before Skullview went on extended hiatus.  I’ve never set out to do music as a business, or do anything big time with it.   RIP is cool because they started the label so they could listen to albums from bands they liked and supported.  It’s a different label.  Their agenda is different than the others. It’s not about making a living off metal.  So we shared a lot of the same views on this whole metal thing, and it just seemed logical to continue to work with RIP.

Realistically, I have no pipedreams or desire to make this band anything more than what it is.  Maybe that will change the day I get my first ever lifetime royalty check, who knows, ha.   We’re just a bunch of old dudes jamming some kick ass heavy metal music.  If it goes anywhere beyond that, it won’t be because we are working feverishly toward that goal.   It’s cool that we get their help to get a product printed and available that may reach more than our little circle of local contacts.

Dead Rhetoric: How often has Stone Magnum been able to play out live? Can you tell us about some of your favorite shows for the band, and how would you describe the band in a live setting compared to the studio?

Tavernier: We’ve probably done between 12-15 shows as Stone Magnum since our inception.   We typically play live 4-5 times a year.  That’s probably not as much as we should be playing live.   We realistically turn down more shows in a year than we actually play…but this works for us for the time being.   If goals were different, we’d be playing a heck of a lot more.   I think our live performance is pretty high energy for a “doom” band.   I think the intensity and ferocity show up in our live performance.   I think we kick up the pace a bit live than we do on album…but it depends on the show we are playing too.  If the whole demeanor of the show is intense…we kick up the intensity.  If it’s morose…then naturally we fall into that vibe and slow things down.   One of my favorite shows was playing the Days of the Doomed Fest in Milwaukee and right up there with that was a show in Chicago with Macabre.  Memorable also was opening up for Raven.

Dead Rhetoric: The midwestern part of the United States has always been a fertile breeding ground for metal in general- but historical it’s been very popular in terms of doom/ traditional acts. What factors do you think contribute to this productive scene?

Tavernier: I think the midwest is an equal breeding ground for all genres actually.   There are bands of every genre who have excelled in the scene…everything from power metal, traditional metal, death metal, black metal…there are a lot of notable bands with popularity in this region.   In Indiana where I’m from life is very blue-collar.  Hot Rod magazine is popular here….so you get these work hardened muscle car guys into harder music.  With Chicago nearby…there is a lot of music to choose from and a lot of musicians walking the streets of that city putting bands together.   It’s just a good mix of everything here that has a lot of influence in the music scene.

Dead Rhetoric: Black Sabbath returns with their first studio album for the Ozzy era in 35 years and charts number one in North America and a multitude of other countries. Give us your thoughts on this album and do you believe it will help the doom metal genre in general gain more appeal?

Tavernier: I don’t think the new Sabbath will have any great impact on doom metal specifically…but I think it will have lasting impact on heavy metal in general.  I think the album is spectacular.  The right mix of all eras of Black Sabbath’s career rolled into one album.   I don’t know what other album they could have written.  This album is obviously the direction they needed to go in what could possibly be their last effort.   I think with the marketing campaign for this album, it was really high profile, and I think the younger kids took notice and started downloading it into their iPods. That’s the way the industry is going…but as long as the music lives on and people start searching for similar style bands…then metal is safe I guess.  There will always be bands…whether they can make money or not, it doesn’t matter.  As long as there is cool new bands coming out with music for people to hear…metal will be in a good state.

Dead Rhetoric: Where does Skullview currently rank in the priority chain against the work of Stone Magnum? It seems like it’s been an up and down struggle to gain momentum for the band over the past few years…

Tavernier: Skullview is what it is. We have plans to do another album…but when is the only question.  There are always things going on with Skullview that prevents us from doing something on a regular basis.  I’m sure eventually it will fall into place…but I have no timeframe on that.  Stone Magnum is definitely the main priority.  We’ve been active, and the active band is always the priority.

Dead Rhetoric: How much does playing music help you channel daily work life stressors or personal struggles in a better direction?

Tavernier: Definitely during the formation of the band and up through the first couple of years…it was very important in getting my mind outside the world of reality and offered an escape to someplace where I didn’t have to worry about all the crap that was going on.  It was a harmless way to get emotions out that may have otherwise pushed me over the edge.    Things have smoothed out in the last year, and life focus has shifted in a different direction, so there is no need to escape.   But it is very important to have the outlet of playing music.

Dead Rhetoric: Where do you think the world leaders need to put their most attention on so that we can get financially back on track?

Tavernier: When you say the world leaders…I assume you are referring the Rothschild’s and Rockefeller’s and their banking elite partners?  They have hijacked governments and manipulated economies with their central banking systems, and we are left to blame our government leaders and corporate America for being hijacked by these criminals.  It goes higher up the food chain that that.  A good start could be to shut them down by declaring the trillions in debt owed to the private, foreign owned, Federal Reserve Bank to be written off as illegal and unconstitutional.  When the banking cartels who run this don’t get their billions in interest payments on the national debt from taxpayers, then they’ll lose a lot of their power and economies can begin to rebuild themselves as they did prior to 1913.

Dead Rhetoric: What would you consider the best festival and best concert you’ve witnessed as a metal fan? Are there any particular musicians you would like to meet and have a conversation with that you haven’t been able to as of yet?

Tavernier: For me the best festivals were the BW/BK fests in Cleveland.  Saw some great bands at those fests and had a great time at the two that I attended.   Got to hang out with Candlemass and Trouble at those fests…what more could a metal fan want?    As far as meeting musicians, I don’t worry too much about that.  If I happen to meet someone from a band I admire I’d rather speak to them as a friend rather than as a fan.   I don’t want to grovel over anyone…it may make them feel uncomfortable, so what’s the point?

Dead Rhetoric: Where do you see the next 12-18 months going for Stone Magnum in terms of shows, songwriting for the third album, promotion, etc.? Do you think there is interest in playing festivals outside of North America?

Tavernier: It’s hard to say what will happen down the road with Stone Magnum.   We do know that we’ll head out to the east coast in November 2013 where we’ll hit Cleveland, New York, and finish in Virginia for the Stoner Hands of Doom festival.  There are negotiations going on now for a European release of From Time…To Eternity with a German label.   Who knows…this may help get some interest for Stone Magnum where we can hit a festival or two in Europe. We’ll have some other surprises to follow later on, but in the meantime, we’ll keep writing songs…playing a show here and there.  We’re not changing our formula.  This works for us and we’re happy doing it this way. 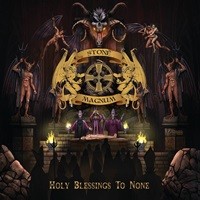 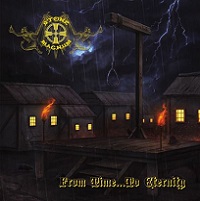