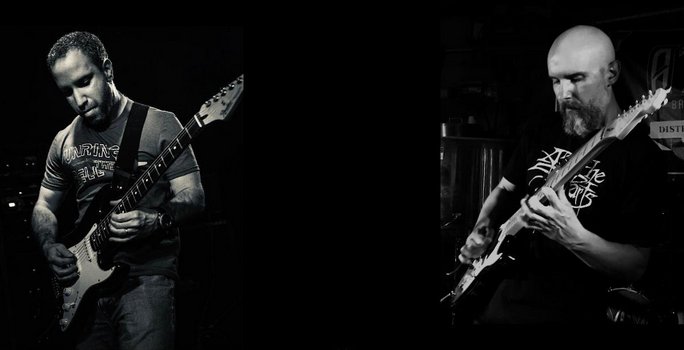 For whatever the case may be, space and heavy metal can make some excellent bedfellows. The vastness of it, the darkness surrounding it, or the intriguing phenomena that occurs throughout it. It can fuel lyrics or even the mood, as is the case with Stellar Death. An instrumental outfit formed by two members of Brave (Scott Loose and Matt Kozar), which combines metal and post-rock and gives it a cinematic boost. The band has recently released their debut, Fragments of Light, which gave us the opportunity to chat with them about the release, their approach to writing in an instrumental band, astronomy and film score interests, and much more.

Dead Rhetoric: Given the experiences of you two in other bands, where did the spark come from in making Stellar Death?

Scott Loose: There were a combination of factors that lead to the creation of this project in November 2019. For one thing, Gear Gods and Toontrack (the latter of which a drum software company) were running a competition called Drumception—basically, it was like a 2-minute metal drum track, and competing guitarists from around the world wrote riffs to it for a grand prize. Both Matt and I separately wrote riffs, added bass and everything, and submitted. While we didn’t win, it was a lot of fun to write this way. The drum software sounds so legit because it’s actually sampled recordings by real drummers, yet the patterns are tailorable via MIDI. It just opens up a lot of creative possibilities, and we decided to embrace this as a new way to create music.

Around the same time, I came across an astronomy article that described how when stars collapse, or sometimes collide, they create this massive light—like producing more energy than all of the light that our sun will emit over its lifetime. It even referenced this as a ‘stellar death.’ I was sort of fascinated by the fact that there is all of this intensity, and activity happening outside of our own world, and I thought it would be a cool idea to try to capture this varied energy as a theme for music. So we just ran with this concept for the creation of our new emerging instrumental project.

Dead Rhetoric: Is it freeing to be able to start something new with no strings attached to it?

Matt Kozar: I would not say there are no strings attached to the project, since we use quite a few string keyboard patches on the album! It has been such a great experience starting a project from scratch with a blank canvas. I think Scott and I have both evolved in our music tastes over time and this has allowed us to explore those influences and inspirations where it would be challenging to do so in our current music projects.

Scott: Yeah, absolutely—especially because we are using a lot of software instruments, synths, strings, percussion, and just weird sounds. All of this evolved for us into a fusion of metal, post rock and cinematic music. And given we’ve both been in bands for a long time, it’s also been interesting to pretty much start from the ground up with respect to finding our audience. But yes, it’s very freeing. We aren’t bound by any expectation, have never cared about doing music for money—it’s all just a creative outlet, and a way to communicate and share ideas.

Dead Rhetoric: Do you feel that putting out some singles along the way in 2020 allowed you to figure out what you were aiming for with Stellar Death before combining things for Fragments of Light?

Matt: Absolutely! It gave us a chance to introduce people to what we were trying to accomplish in the music, while also having more bite-sized goals in writing, recording and releasing a song at a time instead of embarking on an entire album all at once. As we started writing and recording, and discovering our style and the different sounds and songs to explore, it became evident that we had a cohesive set of songs that eventually materialized into the Fragments of Light album.

As we continue to write new material, we’re thinking that releasing singles is an approach we would like to revisit again, as a way to share standalone ideas that may not necessarily be tied back to an overall album concept. But do allow us to explore those ideas and share with listeners.

Dead Rhetoric: Is there a different process to writing music for Stellar Death, considering the instrumental nature of the band?

Matt: I do not think that we approach the songwriting itself differently with the project being instrumental. As mentioned before, the project itself has allowed us to explore a much broader array of sounds and styles from post rock, progressive rock, ambient and cinematic soundscapes, etc. The one aspect of writing that we do try to be cognizant of is creating a melody or theme with the music. There’s no place to allow for a vocalist to take the tune in new directions or for the lyrics to drive the theme. We have to consciously factor that in from the start of the writing process and think about the instrumentation that we want to use to represent the theme and overall vibe of the song. It also permits the listener to interpret the music in a variety of ways.

Dead Rhetoric: How would you describe the atmosphere of Fragments of Light? What role does it play in the sound of the band?

Scott: We tried to capture, through music, the varying levels of intensity and energy that we perceive to exist out in the cosmos, to include using some pretty dissonant harmonies, but also some very melodic passages. Some of the sounds we used are actually atonal, like the space effects toward the beginning of ‘Betelgeuse,’—all of this ultimately built the atmosphere of the album. To me, music is mostly about tension and release. Dynamics are the key to emphasizing both ends of the spectrum, i.e., making heavy parts sound heavier and lighter parts more serene. I’m pretty happy with how we captured these concepts overall. A good example is how the outro of ‘The Astronomer,’ which is pretty dissonant and creates a sense of unease, leads into the very relaxed track ‘Endless.’

Dead Rhetoric: Do you feel that a release like this has a best way to be listened to or absorbed?

Scott: I think of this project as being like a soundtrack to your imagination, where the song titles and album art are just sort of setting the scene. I get a strong visual sense when listening to it, but what is cool is that everyone who takes a deep dive into this album will have their own unique experience while listening. Of course, this is always the case when someone is listening to music, but because this is instrumental, I think it lends to perhaps a more personalized, or at least individualized, experience. That’s a long way of saying, throw on a good pair of headphones and see where it takes you.

Dead Rhetoric: What goals would you like to see Stellar Death achieve?

Scott: I just want to continue writing music, and share it with people who may enjoy it.

Matt: Aside from intergalactic domination, writing and recording more music and exploring a variety of other themes and styles that Scott and I have yet to tap into.

Dead Rhetoric: The band’s sound was inspired by some film scores. What are some of your favorites?

Matt: I enjoy quite a few scores from Hans Zimmer (Interstellar, Blade Runner 2049) and Johann Johannsson – (Arrival, Sicario) to get inspiration, but also love ambient landscapes created by Steve Roach, Tangerine Dream (they’ve done soundtracks too) and Klaus Schulze. The music they create really allows you to mentally transport to a different place, which is definitely a goal of our project.

Scott: Yeah, I also really love a lot of film and TV scores. Some notable soundtracks are Last of the Mohicans, Immortal Beloved (some of my favorite Beethoven recordings), The Godfather, Bram Stoker’s Dracula, and Gladiator (which is of course Hans Zimmer, but with Lisa Gerrard from Dead Can Dance). Also, Ramin Djawadi’s music for Game of Thrones and West World is fantastic.

Dead Rhetoric: Where’s your personal interests lie in terms of astronomy and the cosmos?

Matt: I have always been fascinated by science fiction, the cosmos, etc. Carl Sagan’s books and television series were huge influences in getting me interested in astronomy and science, and I have always appreciated science fiction works from Phillip K Dick, Arthur C Clarke, Frank Herbert, George Orwell, Jim Starlin (comics). I think it provides an appreciation for where and who we are in the universe, and even knowing our utter insignificance, it stirs you to want to venture out and beyond.

Dead Rhetoric: Are there any plans for your other bands (Brave, While Heaven Wept) currently?

Scott: Brave is very much a live and organic band, so we’ve been pretty hindered by the pandemic. We haven’t gotten together in over a year, which sucks because this is literally my family. As for WHW, I have no idea—there was talk of doing another recording, but I’m just not sure what’s going on with that band. I am excited to be playing on a new As The Sea Parts record, which should be released in late 2021. ATSP is a death metal band from Virginia that was formed back in the mid-1990s, and the main songwriter and a dude I grew up with, Paul Vanderslice, has written an absolutely crushing new album.

Dead Rhetoric: What’s next for Stellar Death as we move forward into 2021?

Scott: Matt and I have continued to write new music, and will likely compile some of this material for new releases in 2021. We may release a couple of singles initially, but we’ve also been working around a particular theme for either an EP or full-length album. Either way, we’re going to take our time and see how it all evolves, but I’m confident we’ll be putting out new music this year. 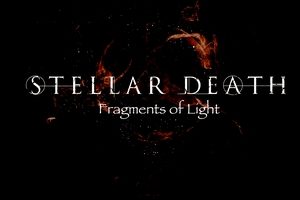