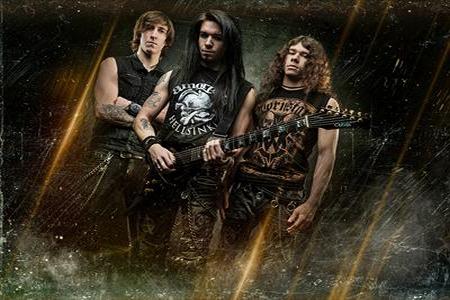 Dead Rhetoric: You’ve been posting lyrics as the album release approaches. How is that direction going in terms of getting fans excited?

Jameson: I just want to make sure that we are active and the lyrics on this album are a little bit more real. Fires of Life was more battle metal, bashing skulls with swords and that kind of stuff. Most of the lyrics, with the exception of “Be Dead or Die,” are more relatable and a metaphor for what the band has been feeling as we have been trying to do this [album] and line-up changes. So it’s relatable in that the lyrics are a bit vague and open-ended, which is what we wanted to do. But I wanted people to be able to see the lyrics clearly, as not everyone opens up the booklet and it is a little hard to understand death metal vocals. Probably not so hard for my style but I know not everyone listens to lyrics in the first place. But these lyrics mean a little than album one so I wanted people to check them out.

Dead Rhetoric: I read somewhere that you started musically with a saxophone and then progressed to guitar. How long have you been playing guitar?

Jameson: I’ve been playing guitar for ten years now. I started practicing when I was ten, and when I was fourteen, I think everyone goes through a phase where they are like, “shit I want to play guitar or drums or something like that because they are more cool.” Not that I don’t think the saxophone is cool but there is only a certain level of brutality you can get out of a saxophone. But I went strictly jazz to guitar, and in keeping with that theme, I didn’t listen to the radio that much but I started listening to guys like Steve Vai and Joe Satriani, pretty much straight instrumental guitar and moved towards more guitar god-esque music, and that’s how I eventually made my way into the Scandinavian metal scene, because all the guitar playing was fucking crazy.

Dead Rhetoric: So were you self-taught or did you take lessons?

Jameson: I took lessons for about a month or two and got my chords down. I remember very distinctly, I came in with my iPod and I had downloaded Michelangelo Batio playing “No Boundaries” and I showed it to my guitar teacher and said I wanted to play like this guy. He watched the video and just laughed. There’s a bunch of people that don’t take that type of stuff seriously and it really pissed me off so I quit my guitar lessons and started noodling, shredding, and scale practicing in my room. So it was a little bit of lessons but mostly self-taught and luckily I had some theory and ear training from playing saxophone for a few years so that definitely helped.

Dead Rhetoric: With the Scandinavian sound that you have, do you ever get labeled as being a European band?

Jameson: When we where in Europe for the Amorphis tour, a lot of people were convinced we were from Finland. I was like, “what” and they would say that we looked Finnish. The funniest thing was when a chick that worked for Nuclear Blast came up to me and was talking and said, “you don’t sound like you come from Finland” and I said “that’s because I’m not” and she said that she was told that we were. So yeah, a lot of people do think that we are from Scandinavia, which is flattering.

Dead Rhetoric: With your road to success, getting on board with Century Media and doing a number of major tours. Does it ever feel surreal to see what you have accomplished in the past year?

Jameson: Yes, the past year has been ridiculous. The last four years felt super long but I can’t believe that just 13 months ago we were touring with Wintersun and Fleshgod, bands that we have always been listening to. We used to stay up until 2 or 3 in the morning writing these songs and watching Wacken videos of these guys and saying, “wouldn’t it be cool if we could be doing that?” We aren’t playing festivals yet but it’s ridiculous, it’s really neat. Sometimes I can’t believe I’m actually doing it, it’s really weird. Like this Arch Enemy tour. I have posters of them on my wall and I have all their dvds and I figured out how to do death metal vocals to a lot of their music. To be able to tour with these guys who had such an impact is pretty cool. I feel pretty honored to be a part of this tour package this time around.

Dead Rhetoric: That was actually what I was going to ask next. What are you looking forward to the most with the Arch Enemy/Kreator tour?

Jameson: The whole thing. It’s pretty neat that we get to be part of the first North American tour with Alissa. When we first had heard that we might be part of the tour, it was announced that Angela was leaving. It would have been cool to meet her too but Alissa’s vocals are killer. I’ve always been a fan of her stuff on The Agonist. The other cool thing; even if I wasn’t playing on this tour I get to see Arch Enemy perform 30 nights in a row, how cool is that? So I’ll be out there in the pit, probably front row, at least for like a 1/3 of the tour when I’m not selling merch.

Dead Rhetoric: Being from Chicago, it seems there are a number of up and coming bands from this area. What’s your take on the scene?

Jameson: Thinking of heavier bands that are from around here, the first two bands that come to mind are Oceano and Veil of Maya, which aren’t really my type of music. A lot of the guys in high school and the local bands in the suburbs, it’s all that kind of either post-hardcore or djenty stuff. No offense to everyone’s musical taste, I get it, everyone likes different stuff, but I can’t do it at all. That’s one of the reasons I didn’t get into metal until I was 18, because that’s all I thought it was, and ‘80s thrashy stuff. Some people say that some of Fires and Virus have some thrashy elements. I guess I’m kind of pulling that out from bands that were influenced by that, like Bodom. So I’m more indirectly influenced in a way but those were never bands that I ever really listened to and I definitely avoided the whole hardcore/deathcore breakdown scene. I was never a part of the metal clique until we started touring which is kind of funny I guess. So I’m not that in tune with the local scene, maybe a lot less than I probably should be.

Dead Rhetoric: With your success, do you have any advice for any younger bands that are trying to make it?

Jameson: I don’t regret anything that is going on, but I think if right now I could talk to my 17-18 year old self and explain what you have to put into it to get where I am. And there’s a long way for Starkill to go. It’s a lot of work, time, money and sleepless nights writing and practicing than any 17-18 year old kid has any remote idea what needs to go into it. You also lose a lot of contact with friends and family because you are on the road constantly and you have to turn down a lot of events to hone your sound and make it work and promote. A lot of these ideas you can probably see if you read between the lines in the lyrics of Virus. That was something that reflected when I was writing the material. It’s killer and definitely worth it at the end of the day, but it’s not for everyone. There’s a lot of shit you have to go through.

Dead Rhetoric: You are on the Arch Enemy tour; are there any plans for the band past that point?

Jameson: Yes, but I’m not in the state to be able to speak about them yet. We are looking on more tours, that’s the long and short of it. Looking overseas and to Europe again. We need to get over there to promote Virus. Hopefully we can get a couple more rounds of American tours. All we really did [after Fires] was the Wintersun tour; the Krisiun tour was only like two weeks for us, and our album came out half way through the year. I’d like to be touring at least 200 days a year. Fingers crossed, if we get the tentative two things that we are looking into getting, it would be very big for us.