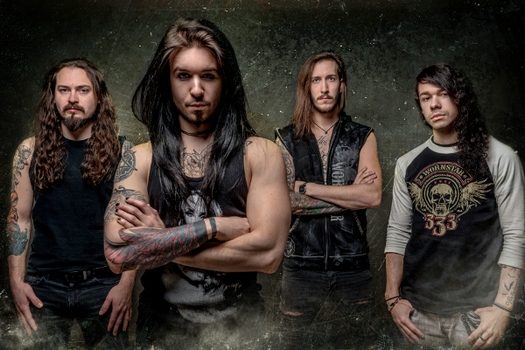 Never one to rest on their laurels, Starkill always seems to be working on something. They quickly released two albums on Century Media and hit a number of high profile tours both in the States and abroad. After a setback where they became label-less for over a year, they decided to take things into their own hands and crowdsource their third album. During the recording, they negotiated a deal with Prosthetic Records, and now Shadow Sleep is available to the general public.

An album that sees Starkill appearing as the band they’ve always strived to be, it’s full of some notable changes, but changes that expand the band in the best way possible. It doesn’t hurt that it’s some the strongest material that they’ve penned to date. But even with a now recently released album that sees them truly spreading their wings, the band is already hard at work writing even more material. We grabbed vocalist/guitarist Parker Jameson for another round of questioning about all of this and more, a week before they hit the road for the current Dark Tranquillity tour. Check it out!

Dead Rhetoric: We last spoke back in January at the beginning of your crowdfunding effort, how’d the last nine months help to further the band in terms of the recording and all that?

Parker Jameson: I know that we are going to do it again for our fourth album…crowdfunding was a way easier route to do the whole thing. We had been without a label for about a year/year and a half when we launched it. It just made more sense – we could see more of the money coming from the fans. Normally, if you buy a CD from the label, the band isn’t going to see any money at all. But in this case, here’s money that they are giving us in advance. They are going to get a copy of the record that they would buy anyway, but the difference is that we get the money, and we get to allocate it into the recording process however we want. So it went pretty well, and the cool thing was that in the middle of the recording process, record labels actually started coming to us when they saw that we were moving forward. After a few discussions with various people and companies, we ended up striking a really beneficial deal with Prosthetic, who is distributing and releasing the album. We were still allowed to do things exactly the way we wanted to, which was awesome.

I think another thing that was different and kind of linked to the Indiegogo is the fact that we weren’t sure how widespread the distribution was going to be for the album. That kind of removed any inhibitions, stylistically. We knew that we were going to take the album to a different place – we kind of wrote it imagining that we might be the only ones listening to it. It resulted in a more honest and less restrained [album] – everything came out the way we wanted to with the music. I’m really glad that we did it that way. We are more content with this one than the previous ones, and we’ve already started writing the next one. It’s really following that same mental train of thought that we were going with.

Dead Rhetoric: So you are already planning to do an Indiegogo for a fourth album?

Jameson: Yeah – obviously that’s not for another 12-18 months. We are probably going to employ it again because it gave us more control over the recording/mixing/mastering process. I like to be able to visually see and allocate everything myself, rather than have someone else doing it for me.

Dead Rhetoric: So that decision [joining with Prosthetic] was more based upon getting the album out there and them having a further reach than you just doing it all yourself?

Jameson: Yeah – that’s what they do…in addition to signing and directing bands. We kind of approached it more in terms of “hey, you have worldwide distribution and I know you are fan of the band and the music.” The other thing that was cool was that some of our previous, close business/team members that had been with us when we first signed to Century Media had migrated to Prosthetic while we were label-less. So it felt very comforting to be back with people who already knew the band since its inception, who understood what we were doing, and were totally supportive of the whole thing. That’s ultimately what lead to it – the distribution, the familiarity, and it was everything that we needed and wanted, and we weren’t getting screwed over in the slightest.

Dead Rhetoric: So it’s a different approach with Prosthetic. Do you feel like you are more of a priority with them?

Jameson: Maybe not more of a priority, but I think they understand that we are very much in the reins and in control of our own band. We are very DYI in our mentality. All of the music videos I shot and edited myself, we did all of the engineering, and a lot of the recording for this album. They just understand that we like to have a lot of power and say behind what we do, from every angle and every aspect. I’m glad that they were into that.

Dead Rhetoric: It does sound like all those initial goals that you had for the band when you put out the initial video for the Indiegogo campaign, even though you are with Prosthetic, ended up being accomplished.

Jameson: Yes. If it wasn’t them, it would have been somebody else or a different company handling the distribution. Obviously, I personally don’t have the means to get an album in store shelves and things like that.

Dead Rhetoric: Were you surprised by the number of labels that came up to you and said, “Hey we are interested?”

Jameson: Not really. I think when any band that has a degree of movement behind it is label-less, I think other labels kind of hover in vulture-esque fashion saying, “What’s the shittiest deal I can give them that they will take?” We actually refused a few deals, because we were capable of doing this ourselves. That’s why we did ultimately settle with Prosthetic, because we pretty much determined what it was going to be and they were cool with it. I’m not sure that I’m surprised by any attention that was called to it, but I’m glad that we were smart enough to say no all the right times that we did. It felt very empowering to be able to say, “No, this is dumb” and then move onto the next person. Kind of flip the tables a little bit.

Dead Rhetoric: Listening to the album as a whole, do you feel the band has finally reached that place where you can say, “This is who we are?”

Jameson: Yes. I think literally that was conveyed in a lot of the lyrics in the album. A lot of the topics that were discussed – I know some people are going to say that they are shitty, terrible lyrics. Maybe they are generic, but they are also the most real lyrics we’ve ever had. This is the sound that we have always wanted, which I’ve said in other statements before. When we first formed Starkill years ago, when we were Massakren and even before that when we were in college and we were doing things – I always wanted to be a Nightwish-y, Epica, Trivium-y, Wintersun kind of band. There were a lot of influences that got me into metal in the first place. But I wasn’t comfortable with my singing at the time, and we didn’t have a girl singer. So we looked at what we could do with the tools that we had, which kind of turned into Fires of Life. I adore that record – it was the first metal songs I had ever written. But I specifically made sure to write riffs that would never need clean vocals. I would have been really upset if there was a song on Fires of Life that needed cleans but I didn’t put it on there. So we did kind of contort our style so that it would work with the tools we had.

With Virus, we started to dip into clean vocals a little bit, because after going out with Amorphis and Wintersun, we were like, “fuck, we can’t keep ignoring this style that we’ve wanted to do since forever.” So we started to do that and we really just went all-in on Shadow Sleep, after we added Sarah [Lynn Collier] to the line-up. Tony and I were both substantially better exercised singers, and she’s an amazing singer, so we said screw it! Let’s put out the album that we’ve wanted to put out right from the get-go, and if people don’t get it, then tough shit. They don’t really know what we are all about, in our hearts. So here it is!

Dead Rhetoric: So do you think those are the biggest differences then? That you said that you were going to do what you always wanted to do, and how the clean vocals shaped the overall sound…

Jameson: Yeah – I still think musically, if you mute all the cleans, you’ll hear the Starkill-ness that is in there. I really think that the people that don’t get it are just the metalheads who listen to screaming death metal purely because there is screaming. They don’t care what the vocals are doing – if they are screaming, it’s “alright, I love this shit!” It’s like, listen to what the screams are doing. Cleans are an instrument that we employ in our music now – I think both Sarah’s voice, and women’s voices in general are an amazing sound and it’s in a lot of bands that I like. So we did it. Again, it’s something we’ve always wanted from the start of the band, and this was the point of Starkill from the beginning.

We were Massakren beforehand, but then I decided last-minute, before we put out the album [Fires of Life] and a lot of people think that the label made us change our name and that we were selling out. It’s like, no, I changed the band name because I knew deep down, eventually, we would be putting out more melodic, clean vocal music and Massakren would have been a terrible fucking band name for the style that I knew what would come out. And it finally did on album three.