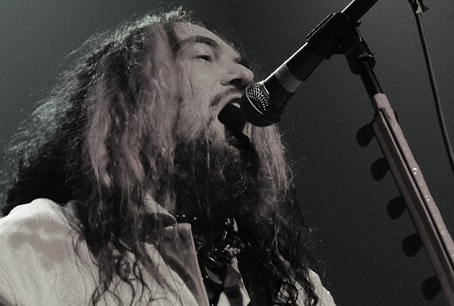 Dead Rhetoric: Yeah, it definitely sounds like it. And that’s really cool too. I hadn’t heard about the original school book you wrote the Sepultura name on being put in the Hall of Fame. That’s really cool.

Cavalera: Yeah, it’s in there with Dimebag’s guitar, and there’s a bunch of other things from metal artists and the book is right there on the corner. It’s so cool. It’s mindblowing that it made it all the way there. It’s such an iconic place and it’s mindblowing to be a part of it.

Dead Rhetoric: There was one other thing I wanted to bring up too. You’re working with a lot of cool people to make the book, but you’re also working with some pretty cool people on this new musical project with Troy Sanders from Mastodon and Greg Puciato from Dillinger [Escape Plan]. What is the latest news on that group? Have you guys come up with a name, or are you getting ready to record, in the recording process?

Cavalera: We’re actually finishing the recording right now. We’ve done twelve songs. Everything’s recorded, all the guitars, bass. We are singing on all of them right now. We still have half of the record to sing. It doesn’t have a name yet. We’re gonna find a name sometime soon and hopefully we can announce to the world the name of the band. It’s gonna come out some time next year, and the music is just a big collage of all the sounds people can expect from us. And having us singing on each song, the three vocalists are very different. Me, Greg, and Troy have just super-different voices, and it’s so cool to hear them together in every song and how they’re exposed on every song. You can totally tell, oh, this is Troy’s part, or oh, this is Max’s part, this is Greg’s part. It’s very noticeable when each one of us sings that it’s our part. And I think that’s what’s gonna make this project cool, man, the idea of these three singers.

It’s a cool, original idea, I think. Not many metal albums out there have three different people singing like that, and I think we found three very cool voices to do this thing. And I think it’s gonna be really cool, and I hope we can do a couple of shows with it, and I hope it’s gonna get some more people into the music. Maybe some Mastodon fans will get to hear that and go check out Soulfly. It’s all about expanding our horizons with the music.

Dead Rhetoric: Exactly, and you mentioned the mixture of the three different vocal approaches. I would imagine musically, too, that would be an interesting fusion between the three. So are we basically talking about not only vocally but musically as well, we can expect a little bit out of Mastodon, Dillinger, and Soulfly’s bag of tricks? I know you mentioned before the music was heavy but had a lot more melody than you may be used to working on with some other projects. So would you say what we can expect musically from this project is a very melodic, very heavy, maybe even somewhat progressive record or something along those lines?

Cavalera: think so. You know, you’ve got all the heavy riffs in it. Some songs start heavy and you know it’s a Max song. Because of the way the riffs are, you know it’s a Max riff. And other times it becomes melodic and becomes something more like a Mastodon piece of music. Not much of the Dillinger confusion, kind of crazy metal. We didn’t really want to go there [laughs]. It was too chaotic for us, and Greg understands this. It’s one of the reasons Greg wanted to do this project because he wants to sing in something a little more traditional and less chaotic than Dillinger. So I think it’s cool. It’s more direct.

The songs are metal, for sure. They’re gonna be full metal songs. They’re not gonna be non-metal at all. They’re very metal. They’re very heavy. Some of my heaviest riffs are on this project that I’ve ever written. But it’s connected with melodic stuff, so when that comes in the mix, for me it’s attractive; I’ve always wanted to do that. And it’s cool to be part of something like that, that to me is very different in my career that I’ve never done. So almost every song has the mix of heaviness and melody, and I mean, that’s great. That’s something that for me to interact with and do after making heavy records for all my life, to make a record like this is really cool.

Dead Rhetoric: Yeah, I know we’re all looking forward to hearing it. I really appreciate you taking the time out of your day to talk with me for a few minutes. Is there anything you’d like to say at all to any Soulfly fans who may be reading this interview?

Cavalera: Yeah, man. Check out Savages. It’s coming out. We’re gonna be on tour also with Havok in America in October, so come out and see us. It’s gonna be fun, and thank you for supporting metal and Soulfly in general. We really appreciate, and I look forward to seeing everyone down the road.