Soulfly – Music, Family, and All Matters of Savagery Part I 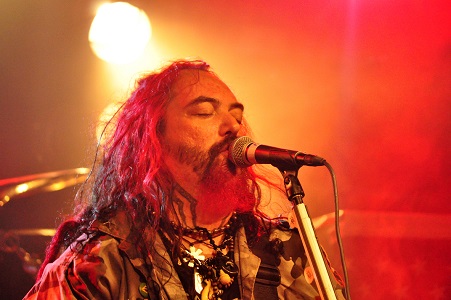 Dead Rhetoric: “Bloodshed” was the first song I heard off the record, and it was one of the heaviest things I’ve heard in a while from Soulfly actually, with that constant slow triplet at the beginning, but it immediately hooked me, so great work.

Cavalera: Yeah, when that riff came on I was like, yes, it’s really killer, and I knew it was going to be a mid-tempo kind of song, and I was okay with that because I opened records with mid-tempo songs on Roots and on Primitive with “Back to the Primitive”; “Prophecy” is a mid-tempo song and it’s okay to open records with that. I’ve opened records with fast songs also and, you know, it’s variety and changes all the time, but there was something about “Bloodshed” that for me made it super-satisfying to just open the record with that. It sounded just very guttural and very raw, powerful, very heavy, that it just feels good to hear and bang your head to. As a headbanger, the natural reaction I got was to bang my head to that song, and I think that’s the metal in all of us talking to you.

Dead Rhetoric: Absolutely. And speaking of the heaviness and brutality, that reminds me of what you mentioned earlier with some of the guest vocalists you had this time around. You mentioned Jamie Hanks from I Declare War, Neil Fallon, Mitch Harris, and your bass player, Tony Campos, on “El Comegente” as well. These are all very diverse vocalists, but they’re all very intense. When you’re in the studio with these guys recording your vocal parts, is there every any sort of friendly rivalry going on where you think, We need to up the intensity, or I feel like outperforming Jamie Hanks today and that makes him raise his intensity, all for the betterment of the song, of course, but is there ever anything like that that makes you bring out the most intense vocal approach you can?

Cavalera: Unfortunately, neither the Jamie song nor the Neil song was done together. We had to send them those songs. And that wasn’t the original idea. It’s always better to have the guy in the studio with me and that’s normally how I did all my old collaborations with Tom Araya, David Vincent, Corey Taylor, and Chino; it was all in the studio with me trading ideas, and you get a little bit of that competition, like Oh, man, he created a killer verse. I better step up my game and make a better verse next time around. But the way “Fallen” and “Ayatollah of Rock ‘N’ Rolla” were created, I sent it to them and I already sang my parts.

In fact, in “Ayatollah,” in the original mix, I sang on the beginning with my imitation of Clutch. I actually made an imitation of Neil and I wrote some really stupid lyrics about redneck hate, and it was all about rednecks; it had nothing to do with “Ayatollah of Rock ‘N’ Rolla”; it was all about drinking moonshine in redneckland. And Terry was laughing and was getting ready to send Neil the song and I was like, “Terry, do not send him the vocals for that song.” Terry’s like, “Why not, man? He might like it; he might get some ideas from it.” “No, no, no. That’s just for us here in the studio. I was imitating Neil. Do not send him that” [laughs]. I don’t know where that take is. It’s probably erased now. Terry probably threw it away, but it was fun. But Neil totally surprised me when he did the talking part. I thought he was going to do the Clutch voice. When I wrote that riff, I imagined him singing in the Clutch voice full-on. When I got the tape back, it shocked me, like Whoa, he’s talking. This is so cool. It’s a lot cooler than I thought, so he surprised me in an even cooler way. The talking part was even cooler than anything else he could have done on that song, and then he talks on the end of it again, so it’s great; it’s fuckin’ great. It was amazing.

And “Fallen,” I wrote all my parts, and I wrote the lyrics for Jamie to sing so he didn’t have to write any lyrics, one less thing for him to do. So I sent him all the lyrics and told him where to sing, and there was a part with more lyrics. There were four lines of lyrics and Jamie called me back like, “Hey, Max, I’ve got these four lyrics here, but if I wanted to do two lines it’s much more powerful. Can I just cut off two of the lyrics?” And I was like, “Fine. If it’s for the best of the song just do it.” So he did that and it was the best idea because it’s right in the middle of the song where he goes, “Clean off the blood from my blade. Let it drip from my face.” And he sings it just so heavy, so brutal. He has the high-pitched voice and the low-pitched voice together, which is something I like to do sometimes. He did that to the precision method; he took it to the whole next level, and when that part comes in it’s just so brutal, the apex of brutality, you know?

And for me it’s so cool to be involved with this new band because I love the metal that’s being done right now. I love Man Must Die, Psycroptic, Nails, Acacia Strain, you know, a lot of the new wave of metal that’s being done right now. I’m in touch with a lot of those bands, and that’s why it was so important to get Jamie on the record to make this connection between me and Soulfly and this next generation of bands because I want to still feel I’m somehow a part of this generation. I love all these bands and want to play with them and be part of the movement, so I think it was definitely cool to have Jamie on the record.