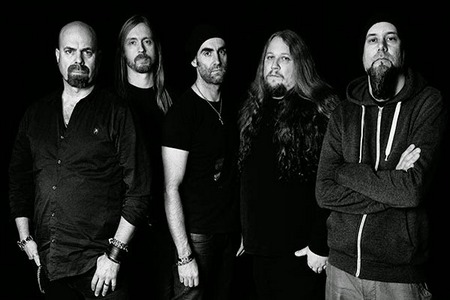 Originally formed back in 1988, Sorcerer disbanded relatively early into their career. Releasing only two demos in their day, the band moved onto other pastures (most notably Johnny Hagel into Tiamat). But as these things tend to happen with time, Sorcerer was resurrected for a festival back in 2010. One thing led to another (as elaborated below), and Sorcerer’s first full-length, In the Shadow of the Inverted Cross, finally hit the shelves at the end of March.

Epic doom metal that takes its nods from Black Sabbath as well as Candlemass, In the Shadow of the Inverted Cross is no mere copycat. Full of heavy riffs and memorable vocals, it’s made an impression on a number of DR’s staff. That being said, we were able to get in touch with bassist Johnny Hagel to get the inside scoop on the band’s reformation and current plans.

Dead Rhetoric: What initially led to the disbanding of Sorcerer back in 1992?

Johnny Hagel: I think it was many reasons. First, we never got a record company interested. Back then nobody released their own albums like today. Then maybe we got tired of the band, I don´t know really. Maybe it was time to do something else.

Dead Rhetoric: Were there any regrets about letting the band go?

Hagel: No, at least I never regretted that. I had really good years with the other guys and we did something that I am still proud of. I also learned a lot, both musically and business wise.

Dead Rhetoric: Sorcerer then disappeared, what then caused you to re-unite for that one-off show back in 2010 for the Hammer of Doom festival?

Hagel: We got a mail from Oliver Weinsheimer (Hammer of Doom Festival/Keep It True Festival) who asked if we could play the Hammer of Doom festival. This was in 2011. I called up Anders Engberg (singer) who was the only one I had contact with since the ”old” days. We talked about it for a while and we weren´t really up for it but decided that we should think about it for some days. After a couple of days I called him and we decided to do it. We really tried to get hold of the other members but didn´t have any luck with that so we decided to look for some other musicians.

Dead Rhetoric: What made you decide to keep the band running after the Hammer of Doom fest?

Hagel: First the response we got, it was amazing. People knew the lyrics and I think we realized that there was a demand for us. Then we had a lot of fun playing together so that made it easy in the end.

Dead Rhetoric: Oftentimes, when a band reunites after an absence, there’s a bit of longing for new material to play live. Is that what happened with Sorcerer?

Hagel: We said from start that we wanted to write and record new music. There is no point if you just play all the old songs, I want to move forward. We all love all the songs but why limit yourself if you have more music inside you?

Dead Rhetoric: Initially, the band was shooting for a 2012 release for new material. Did anything delay the album (other than the loss of Ola Englund) or was it just matter of making things to your expectations?

Hagel: We wanted to do the best possible record that we could do and that takes time. When people has waited for a couple of years I think they are willing to wait some more to get a better album. With the reviews I have seen so far the extra work that we have done was worth every extra hour that we spent.

Dead Rhetoric: How did the deal come about with Metal Blade? What made them the right fit for the band?

Hagel: When we had mixed the album we sent it around to the labels that we thought could be interested. In the end we had like 8-9 offers to choose from and that was a big surprise for us. Not that we didn´t believe that our music was good end more a general feeling. The reputation that Metal Blade had and the bands that have been on the label made it pretty easy for us to choose them. So far we are more than happy with their work and we hope that we can work with them for many years.

Dead Rhetoric: The band had acquired a cult-like status in their short time period of existence. Were you ever surprised how people continued to be interested in the band after it was no more?

Hagel: Yes, we never saw ourselves as a cult band. That was something that we found out when we played the Hammer of Doom festival and talked to people after the gig. It is always hard to see the status of your own band when you are in the middle of it.

Dead Rhetoric: How do you feel the doom genre has changed since Sorcerer exited the scene in ’92?

Hagel: Back then there were just a few bands that we heard about. Candlemass and Solitude Aeturnus were the obvious ones as they released albums but other than that there were not many more. Today there is a lot more bands, like Below, Crypt Sermon, Krux, Funeral Circle, In Aevum Agere to mention just a few.

Dead Rhetoric: Going along with that, how do you feel that Sorcerer has changed since its original form?

Hagel: I think we are trying to develop the Sorcerer sound. We want to write heavy, doomy songs that have that epic feeling in them. We really don´t want to repeat our self but still be true to what Sorcerer is about.

Dead Rhetoric: What’s next for Sorcerer here in 2015?

Hagel: We are booking shows for after the summer and hopefully we could do a small tour in the autumn. Then we will start to write new songs as that takes time if it is going to be as good as we want. 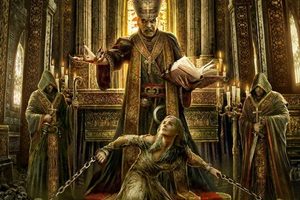