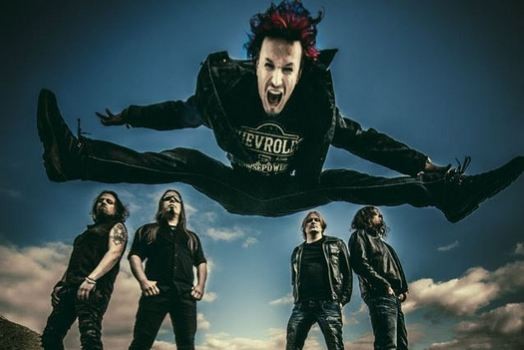 Dead Rhetoric: Which is hardest in your viewpoint – establishing a successful career in the metal scene or maintaining it?

Kakko: If it would be a starting band right now, it would be establishing it, easily. We got a jumpstart back in the day- we just happened to arrive at the right time for this melodic power metal train thing, got a deal and we were really into the style at that time and got ourselves established that way. We were lucky, but I take a little bit of pride in the fact that also maybe we were good enough in some ways, that we had that staying power. I think it’s establishing yourself, just like any band- but we just happened to get really lucky- we didn’t have to do much of anything to get out there. Staying is easier, as long as you have some kind of steady career going on. Even if one or another member happens to leave the band, or gets fired, you will be able to replace that member. It’s so much easier to drive a car with four wheels, I suppose. Establishing… my final answer! (laughs)

Dead Rhetoric: Now in your early 40’s, have your views on life changed much from your 20’s and 30’s? What do you value most and what’s most important to you?

Kakko: Of course it has changed. Who doesn’t change in 20 years? Especially when you are 20, at that time you don’t have many responsibilities- at least I didn’t have any at that time. I didn’t have to carry the weight of the world on my shoulders at that age, yet. Since I’ve become a father that’s the biggest game changer, in every possible way. You need to grow up to be a responsible person, really taking care of things and that happened to me at a fairly older age, five years ago. I was about 36…oh god! (laughs). It would have been easier to get into that a little earlier. It’s done a lot of good for me- I’ve grown up in every way. Not so much physically- but I have to be thankful because I’m not growing fatter at least. (laughs) Mentally it has been a big, big thing.

Family has to be the biggest thing- but the most horrible thing that could happen is if I had to choose between music and my family, that would kill me. I value the fact that I can somehow combine these two important things in my life- because I don’t have any chance in making music in one form or another and I feel lucky that I can actually do this for a living. That chance is a blessing in many, many ways.

Dead Rhetoric: I’m happy to see the support you give to a younger band like Trick or Treat with your guest appearance for “United” on their new album – what do you think of the new generation of power metal, is this your way of paying it forward for others that have done favors for you in the past?

Kakko: Of course you do- and they offered me the chance to do that. We’ve toured together before, and they are the nicest guys- they are so much fun on stage. Another band like that is Twilight Force, this Swedish elf, extremely speedy power metal as well. We’ve toured with them and they are nice guys as well. We’ve managed to surround ourselves with really funny, nice people lately- it’s been really good. I think in many ways the power metal genre and metal in general in the worldwide thinking, especially in Finland where metal for a long time was the biggest thing in the mainstream- you would hear metal music in every hockey game and even on the news, when that shifted and went down… all the work that we are doing now is to maintain the metal scene. Give new bands a chance to stay there for long enough to get over the ‘bad’ season if you will. Metal music will eventually come back again as the biggest thing but we need to build our power and renew the genre a little bit. A lot of it relates to supporting the genre and we relate to the synergy of this in every possible way. We need to do this together!

Dead Rhetoric: You’ll be touring mainland Europe with Twilight Force as openers, while coming to North America with Leaves Eyes and Omnium Gatherum as support. Do you feel in today’s competitive live marketplace, it’s very important to get strong, diverse tour packages together to ensure the best turnouts?

Kakko: I don’t know- I’ve never been the guy that chooses the packages and a lot of times in North America, the whole band has thought sometimes ‘what a weird package’ because we don’t see the connection. In Europe you often connect and tour with bands that mix up the same audience or the potential to like the band- establishing new fans and friends if you will. A band like us, when we go on tour with a band that is extreme metal, there is a chance that fans of that extreme metal band will also like our band, but you can’t take that for granted. It’s weird sometimes how the diversity has been taken as a big and good thing on touring packages. Does it bring synergy in a way? Of course it brings different audiences together, but I don’t know. I’m not the smartest guy to talk about this area- I care about the art and let the other people worry about this.

Dead Rhetoric: If you had the opportunity to change the business model of music, what would you put in place to ensure a healthier scene for the musicians which would hopefully trick down to the benefit of the consumers?

Kakko: One thing that is totally wrong is the streaming thing. That’s the future, you can’t deny that- you need to embrace it rather than kick it down on the ground and step on it because it’s going to be inevitable. The thing is at the moment many of these streaming services, the compensation towards the artists from that streaming it’s nothing. This is a well-established fact. If you are the biggest song having millions and millions of plays and you only get like $1,000- it feels really immoral. Because you don’t have to sell that many albums to get $1,000- really. That’s something that should be reviewed and drastically, quickly. It feels like we have this endgame going on where only bands that are really viable and have the financial potential to tour and support themselves with the music, that they can survive this game. A lot of bands that are forming now and are starting to tour, you’ll see them drop because they would need the support also from the album sales – or streaming services- but it needs to be changed. At least in Europe- I don’t know how it is in North America.

I view it like piracy, but only legal and you get like a tiny compensation. You pay a $10 fee per month to have the world of music in front of you at your disposal. Maybe this is harvesting the fact that we have now in our hands the first generation of twenty-something people who have grown up accepting and understanding that music is free- you can hear it for free and you don’t have to pay for it. For a dude my age it feels so wrong in so many ways. Even if I wasn’t in the business. Even if I was a farmer, and someone offered to stream my potatoes from the field. People say sometimes if they really like the album they will go and buy the album- and some people do that and that’s fantastic, that’s the great hope. But, the harsh reality is if you get a huge sack of potatoes every month with $10 would you still go and buy more potatoes? Would you buy more just to support the farmer if you get as many as you want for free? I don’t think many would.

Dead Rhetoric: Are you aware of NHL Boston Bruins goalie Tukka Rask’s affinity for yourselves and Children of Bodom – and do you have any special relationships with Finnish hockey players because of your love of the sport?

Kakko: I know some people, I don’t know Tukka personally, but the hockey player ex-Dallas Stars Jeri Lehtinen is a friend. The hockey players, there are a lot of metalheads in that crew- and they are nice to mingle with. Especially if you have someone like Tommy, our drummer- his son is very big and loves to play hockey so he gets the chance to meet Jeri and talk hockey with him, that’s absolutely amazing.

Dead Rhetoric: Do your sons understand what Dad does for a living?

Kakko: Not yet- they are like two and five. They are a little too young, they get that daddy sings and travels… but so what. But that’s about it, they don’t understand it to be weird. It hasn’t still dawned on them but maybe that will happen when they start having friends over and go to school for a few more years. It’s worrying me in some way.

Dead Rhetoric: What’s left on the bucket list for you to achieve?

Kakko: There are still a lot of places I would like to go in this band- like Iceland and South Africa, to name two. Have a long career- that’s still in the making and still going strong. I try to not set myself up with any goals in places where I cannot even go and reach. When we started this career I had that, I had this idea that I would get a tattoo when we got our first gold disc in Finland, and that was like such a distant dream at the time. And now we have twelve gold discs on my wall and I still don’t have any tattoos (laughs). So some of these things happen and you don’t necessarily take the reward that you promise yourself.

Dead Rhetoric: And what does the next six to twelve months look like for Sonata Arctica – I would imagine a lot of touring?

Kakko: Exactly. Then spending the rest of the time with your family. I tried counting the days down, how much time we have left out of touring these next twelve months and I don’t think we’ll be home more than four months before next September. In that sense it looks bad, but work-wise it’s perfect. We have a lot of long tours coming up, it will fun but hard and I’m just hoping that everything goes well.