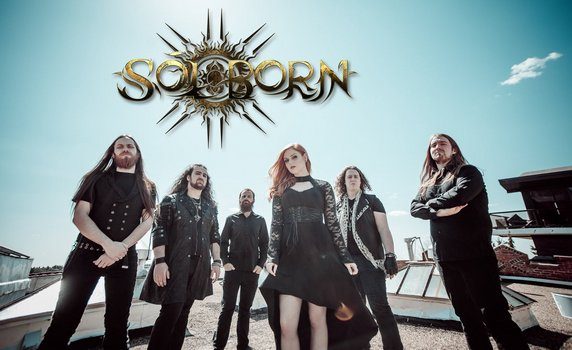 Sometimes it takes sheer force of will to power through things as a new band. Edmonton’s Solborn had a few singles under their belt before the need for some band restructuring took place, having to replace their singer and bassist. But they carried on, even if it caused some delays in their progress. That brings us to their full-length debut, Dark Lights of Delirium, which arrived late this last summer. A triumphant blast of symphonic metal, that even though it does wear some influences on its sleeves, is an excellent representation of what the genre can do. We grabbed guitarist/vocalist Mike Bell and keyboardist Anri Tsiskaridze to give us a further glimpse into the band and how they overcame some hardships to deliver their debut, and much more.

Dead Rhetoric: How do you describe what you have done with Dark Lights of Delirium?

Mike Bell: We’ve made a symphonic metal album that we feel truly does the style justice. Sure, we may not have reinvented the wheel here, but we feel that these songs are damn good. Really damn good!

Dead Rhetoric: What were some of the challenges you faced in crafting the album?

Mike Bell: The biggest challenge was the orchestra! Starting out we had a vague idea of how to arrange/record virtual orchestra, but we had no idea what kind of attention to detail we needed to put in for it to sound real. Each track not only has to be drawn in the MIDI editor note by note, it also needs to be adjusted for dynamics. When you consider that each song has 200-400 tracks… whew! Time consuming.

The second biggest challenge was the vocal recording. When McKenna [Rae] joined the band, the vocal parts were not entirely set in stone. We jumped right into recording, and that meant her learning the songs basically as we went. She handled that challenge like the stone cold professional that she is.

On top of writing/recording the main vocal lines, another big challenge was all the choirs. For the first few months, we did the choir recordings manually AKA Cody [Lloyd] and McKenna recording 50 or so layers of vocal parts to create the choir. The choirs you hear in the songs “Beast of Oblivion” and “Starbreathe” are from these recordings. After that, Anri [Tsiskaridze] figured out how to get the EastWest choirs working to satisfaction. I just have to say… thank Satan’s glorious taint for EastWest! We wouldn’t have gotten the album to sound this good without it.

Dead Rhetoric: You had to do some restructuring in the band (including a new vocalist). How did that impact Solborn?

Anri Tsiskaridze: Nobody likes lineup changes(they’re a massive pain!), and we just had two of them. This was not fun. But, sometimes in order for a band to carry on changes are necessary. Of course when McKenna joined the sound of the band changed. However, it’s a change we are very happy with!

Mike Bell: We were lucky to find McKenna as soon as we did! Finding a bass player took a bit longer though. Dylan’s a guy I’ve been jamming with for years, and I was relieved when he asked to join because I knew he’d get the job done.

Dead Rhetoric: What can you say about the cover art?

Anri Tsiskaridze: It was done by Pierre-Alain D (3mmi Design. Check him out at http://www.3mmi.org/v9/). I found it on the internet by accident. The moment I saw it, I just thought to myself “This is it.” The lone figure facing an enormous world of imagination… it gave me this feeling of sheer solitude, which matched perfectly with the theme of the album.

Dead Rhetoric: What do you feel that Solborn does that helps you stand out in the symphonic genre?

Anri Tsiskaridze: Also we don’t take ourselves too seriously.

Dead Rhetoric: The album is based loosely on the Cosmos series. What can you say about it’s overall theme?

Anri Tsiskaridze: First of all, Cosmos is in my top 3 TV shows I’ve ever watched. The great thing about that show is how it combines imagination and reality/possible reality together. Some songs are loosely based on particular episodes of the show, and ideas they gave me as a songwriter. For example, “Last Curtains Fall” is based on the episode where they tell the story of Giordano Bruno and his execution. In the song, I put myself in his position and described the scenes and emotions from his point of view. Overall, the songs are based on an imagination that is born out of solitude and a desire for a better world, where every place is magical and infinite and where you get to observe different fantasies play themselves out. The album doesn’t have a concrete storyline, but there’s a thematic continuity throughout.

Dead Rhetoric: What draws your interest towards the skies and worlds outside of our own?

Mike Bell: Have you seen our world lately? People killing each other, wrecking the planet, making reality TV… it all makes me want to get in a rocket and head out of here! But seriously… space is just cool, man!

Dead Rhetoric: What do you feel makes fantasy lyrics a good fit for the symphonic metal genre?

Anri Tsiskaridze: The fantasy lyrics allow me to express broad emotions without limiting myself to reality. Lyrics are important, so we take just as much time to craft the lyrics to the same standard as we do the music itself.

Mike Bell: I mean, I suppose we could try some gritty, realistic lyrics… but then again, I don’t know if “symphonic Propagandhi” is a sound that would really work!

Dead Rhetoric: Are you actively looking for a label or are you okay with continuing independently?

Mike Bell: We’re staying independent for now. Given our two year radio silence, we’re basically starting fresh with Dark Lights of Delirium. I don’t feel there would be any point in us looking for a label until we’ve got an established foothold in the scene. I mean… we wouldn’t complain if a label emailed us, but seeking one out isn’t at the top of our priority list at the moment.

Dead Rhetoric: Who would you say are the three biggest musical influences that were involved in forming Solborn?

Anri Tsiskaridze: For this album, you could narrow it down to Xandria meets Nightwish meets a bit of Stratovarius. At this point, you can’t avoid influence from the titans of this genre. That being said, I think it takes a lot of time and experience for a band to find it’s own unique sound.

Dead Rhetoric: What goals do you have for the band, either short or long-term?

Mike Bell: A floating castle for us to live in(equipped with laser turrets and a beer fountain) and galaxywide rock n’ roll notoriety! But if that doesn’t work, I guess some European tours and a bunch of kickass albums will do as well… 😉

Dead Rhetoric: What’s next for the band, now that Dark Lights of Delirium has been released?

Mike Bell: We’ve got some live performances coming up, and we’re going to try and push this album to as many people as we can. Speaking of live performances, if you’re in and around Edmonton, we’ve got a gig coming up November 18th at Festival Place in Sherwood Park! Outside of this, Anri’s about halfway done writing our second album. Based on listening to the demos, I can tell you it will sound twice as massive as our first one!

We’ll cap this off by saying thank you to everyone who has supported us so far. Really! We’ve gotten merch orders and listeners from a bunch of different countries already, which blows my dang mind! Thank you all! 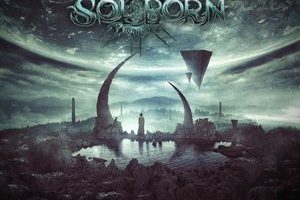