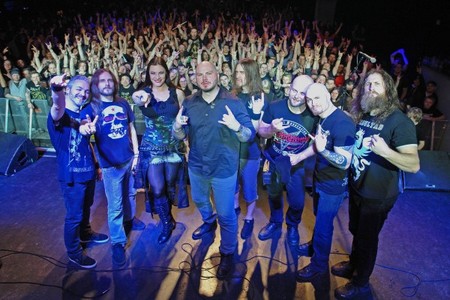 Dead Rhetoric: It was pretty cool that you tossed in some older tracks in the set alongside the newer material. How much time and consideration did you actually put into making that setlist?

Verbeuren: A whole lot, because it was a key thing for us when we discussed the DVD to make sure that it covered everything that Soilwork has ever done. Some of our fans only like the old stuff, and we are cool with that. I understand that. I’m a music fan myself, and there are some bands where I’m only really a fan of a certain period they did, but I’ll go see them live and enjoy them. But when those songs come on from that period, it’s special to me. Knowing that, we wanted to offer people that can enjoy Soilwork a similar experience. It was really important for us to cover every album and to make sure that there was at least one song from every album we’ve ever done. Then there’s also the ebb and flow of the set, which needed to be good at the same time. We had a good template to work with from the last tour, with some good transitions. So we took that and expanded it to this massive one hour and forty-five minute set.

Dead Rhetoric: With a setlist that long, does it get a bit more tiring, considering all the endurance needed for the drumwork?

Verbeuren: Yeah, definitely. The last couple of songs I was pretty beat up! It was fun though, it’s cool to have such a special event. We were all very excited to be playing the show, and it’s the only show we taped as well. I’ve read here and there on the Internet, people saying that we probably recorded a bunch of shows and put the tracks together. That’s not at all how it went. It was really like a one-shot thing. We were like, this is the show, this is the DVD, we have to nail this. It was a little tense before walking on stage, thinking “oh man, we can’t mess this up.” But in the end, it worked out really well. We had a blast and the crowd was outstanding.

Dead Rhetoric: Now that some time has passed since The Living Infinite – due to the double album format, do you feel that some of the songs were overshadowed by the others just due to the volume of material that you released at once?

Verbeuren: I don’t know if I feel that anything was overshadowed really. I still think it works really well as a unit, or entity of its own. In retrospect, there’s always stuff where we could have done something differently. But in general though, considering the short amount of time we had to write and record that album, I’m still kind of blown away by how good it actually turned out and how much passion you can hear throughout the album. The coolest thing for me is that it doesn’t get boring or too repetitive. I know some people will disagree with that, because not everyone sees the same way and obviously everyone is entitled to experience in the way they did. But for me, it’s a really strong double album that is not just a double album for the sake of, “let’s put out a lot of songs at the same time.” The songs are all really good in their own right. I’m still super stoked about it.

Dead Rhetoric: I agree. It seems like it was an opportunity for Soilwork to get a little more diverse. It would have been monotony if you just played the same trademark Soilwork stuff for two CDs.

Verbeuren: Exactly. I think that was the great thing about it. We could put in pretty much everything we had, including songs that wouldn’t have made the cut on a regular album. I think we learned from that for the future – that we can be a little bit more open and try things and it’s still going to make for a good song, if we put the work into it. I think on the next album, you are going to hear the results from that.

Dead Rhetoric: I take it that the next album will not be another double album?

Verbeuren: No, it will be a regular one this time. We discussed that of course, and we were even joking about a triple album [laughs]. It was this one-time thing, and we did it. We don’t want it to become a gimmick. It was a special feeling and a special idea behind it, so this time we went back to the writing board and did something different.

Dead Rhetoric: You do a lot of session drumming for other bands as well. How do you squeeze all that into your schedule?

Verbeuren: Well, I drum 24/7. I’m actually drumming right now [laughs]. That’s what I do. My life is music, and I consider myself a lucky guy to be able to drum and do music as much as I do. Whenever I’m not touring with the band [Soilwork], or doing other work for the band, I’m usually working with other musicians. It’s one of the most fun things, because everyone you work with offers a new perspective on things and a new take on music, so I feel very happy every time I get to be part of a project. It’s always exciting and I always learn a lot from it. It’s pretty much who I am I guess.

Dead Rhetoric: You are putting together the album right now. I’m assuming that there’s probably going to be bigger touring plans once the album is set and ready to be released?

Verbeuren: Definitely. We feel that there wasn’t enough touring for the last few albums. We always have some issues happening that prevent us from touring as much as we’d want to. So the plan with this album is to be out there for a little longer and do more than one North American run, definitely more than one European run, and just go some places we haven’t been before as well. There’s a lot in the works. We have new management now, Breaking Bands; we have some new booking agents, and things have been going really, really well with these people so far. We are just really looking forward to just going out there and playing.

Dead Rhetoric: I just figured after your one run of North America back in 2013 that you had done so many dates that you were like, “We’re good for a bit.”

Verbeuren: [Laughs] Yeah, that was a really long tour! But we still had plans to come back but it just ended up not working out. We kind of have some making up to do for our fans in America and in Canada, because we get a lot of support from everyone here and we want to play for them. We have so many people to play for, we just have to do it.