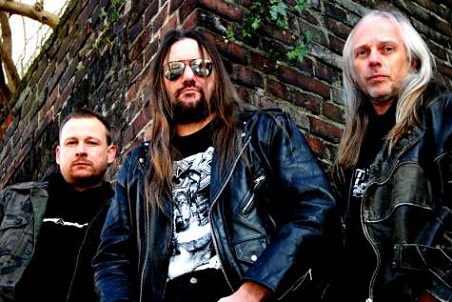 For over 30 years, German thrash band Sodom move along, trends be damned. For bassist/ vocalist Tom Angelripper, he knows what he wants to play- finds the able bodies to help with the cause- and gives the fans his ideas without succumbing to the latest musical fad or fashion statement. He’s survived the loss of members due to changing tastes or waning musical abilities. He’s been electrocuted on stage by his bass (in Peru last year, warned by Katon from Hirax – the only show he’s played purely as the vocalist), and admits that he lost his voice after eight shows on the last South American tour. With the tough times though, Sodom rolls with the punches.

The latest album Epitome of Torture recently debuted at number 32 on the German national charts – their highest ever. And we can expect Sodom to deliver killer performances around the globe now that the festival season has begun. So it was a no-brainer to set up a chat with Tom, and his comfortable, easy-going nature made this half-hour talk go by easily…

Dead Rhetoric: Epitome of Torture is the latest Sodom album- and another strong front to back thrash record. How did the recording and writing process go this time, and do you believe working again with Waldemar Sorychta allows the band members to relax and go full force within your performances?

Tom Angelripper: Yes, I think Waldemar is a very good producer. When we start writing new songs we had to decide if we want to spend the money for a high-tech studio or on a high end producer. And I think we recorded everything in our rehearsal room, we got to use a digital recording which is the usual for recording these days. He helped us in arranging the songs; it’s very hard working with him because he wants to get everything perfect. Also the songwriting when [drummer] Bobby Schottkowski left the band before we started the In War and Pieces tour, we started writing and arranging new material with Markus and I am so satisfied that we got him in the band, he’s so speedy and accurate, now we are able to write heavier and faster songs for Sodom.

Dead Rhetoric: So you end up doing the songwriting face-to-face, it’s not done through computers back and forth, right?

Angelripper: Yes, it’s old-school like in the 1980’s. We meet in the rehearsal room two times a week, starting a jam session, drinking a beer and writing the songs. I hate the bands that write by doing MP3 trading through their computers – we always do everything in the rehearsal room. Makka also participated in the writing on this new record; he had so many good ideas and it’s perfect nowadays.

Dead Rhetoric: I agree with the band’s assessment that the new album is “hard as nails and contemporary, without ignoring our tried-and-tested old-school attitude.” Is it difficult to teach a veteran band like Sodom new tricks of the trade while still maintain a certain standard that is unmistakably Sodom?

Angelripper: Yes, that’s very important. When we start writing new material, we are blind to the scene – we don’t care what the other bands do. We are aware of what Kreator and Destruction sound like with their new albums, but I never think about it. It is important to keep the Sodom sound solid, which you will realize on the new album that the bass guitar is a little bit louder than on the older releases. We have to write new songs but we have to keep up the spirit, we don’t want the Sodom fans to be disappointed. On In War and Pieces, some of the fans thought certain songs sounded like a metalcore band – and I can’t agree with them on that. But we do listen to the fans, and we want to record material in the Sodom way.

Dead Rhetoric: Why did the recent lineup change occur in 2011 with Markus ‘Makka’ Freiwald (previously in Despair/ Voodoo Cult) replacing long time drummer Konrad ‘Bobby’ Schottkowski? Did you hold auditions or did you have a pretty good idea who would fit into the Sodom sound?

Angelripper: I can’t tell you why Bobby left the band because there were so many private problems between us. We cancelled a lot of shows because he left the band two months after the release of the In War and Pieces album, so we had to find a new drummer quickly. I have known Makka since the end of the 1980’s, Makka hadn’t played in a real band over the last 10 years, only as a session drummer in the studio, plus he played with Kreator once as a live drummer. Now he has the chance to be with us, being on tour, writing songs – he’s a wonderful drummer. I know there are a lot of other drummers who are interested in playing within Sodom, but he’s the best one, you know. We are friends as well, there are no problems. I hope I can keep this lineup as long as possible; I don’t like to make changes within the band. Bernemann is a solid guitarist and he has been with Sodom now for over 15 years, Bobby was in the band for 15 years as well.

Dead Rhetoric: You’ve always maintained a defined lyrical base with a lot of military/ war based themes- and songs like “Shoot Today, Kill Tomorrow,” “My Final Bullet,” and “Into the Skies of War” are no exception this time. What makes these types of topics perfect for your style of thrash- and how much research goes into this work?

Angelripper: When I look at the television news or read the latest newspapers I can see that there is a lot of war going on all over the world. North Korea or Syria nowadays seem to be featured a lot these days. I’ve always cared about this, the effects war has on the situation we live in. I think a thrash band and myself as a thrash singer has to write and sing about these things. I can’t change anything, I wake up in the light and I start writing lyrics and ideas.

We were supposed to play Tel Aviv, Israel last year and that was when some sort of shooting went down, so we had to cancel the concerts because of that. I am not a political activist so I cannot change anything about this, but I am very interested in politics and what’s happening in the world. I don’t want to write lyrics like Manowar or a normal, conventional heavy metal band. On the new album I don’t just write about war though. “Shoot Today, Kill Tomorrow” is a like a true story, Wild West account. It’s about gun rights when it comes to hunting the buffalo, and also looks into the rights of the military.

Dead Rhetoric: How tough was it to decide what the two tracks for the bonus material was going to be?

Angelripper: I hate that. The record company, I got a phone call that they want to do an edition in a jewel case and then another one with bonus material for the digipack. It’s very hard to choose the track list for the different versions. I think both tracks are very good songs, so I told the record company why can’t we put this out as 12 songs and maybe use a bonus track for the vinyl? It’s usual nowadays for the record companies to do different kinds of releases in the hopes of increasing album sales.

Dead Rhetoric: I’d imagine when headlining trying to pull together the ideal setlist for the band with 13 studio albums can be a form of torture to appease what you want to play versus the songs the audiences want to hear. What wins out in the end?

Angelripper: I don’t know, it’s very hard. When we do the set list, when we play festivals we have maybe an hour or a little less, we do more classics. People want to hear “Nuclear Winter” or “Sodomy of Lust,” or “Outbreak of Evil”, and we want to also promote the latest release with some new songs. That is always a hard decision. When we are on tour headlining shows, we can play 90 minutes so we can choose more songs. We plan on doing maybe two-three songs from the new album, and find some rarities from earlier releases. We don’t want to leave audiences disappointed that we didn’t play some of their favorite classics. I’m glad about the back catalog, we have 30 years-plus of material to choose from.

Dead Rhetoric: You mention in previous interviews that you don’t like comparing one Sodom album to another. How do you view the album format these days? Would you ever consider pulling out a record and playing it live in its entirety for a special anniversary or festival show?

Angelripper: No… I don’t want to compare these albums. The new one, it’s tough to compare to In War and Pieces or the self-titled ‘Black’ one, you know. It’s hard to choose, we have to listen to all of our stuff. There is a new generation of metal fans in Germany, they love the very old-school material from our earlier days of the first EP and demo tapes. We will always keep the Sodom spirit in our live shows. It’s everything, we want to represent all of the years to complete the Sodom history