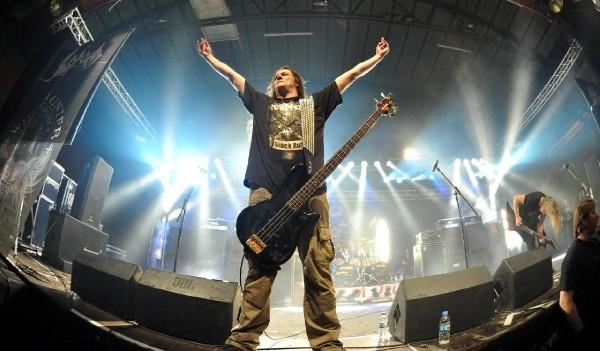 Thrash metal was – and still is – such a massive movement in metal that will always have its influences on the majority of metal bands, whether direct or indirect. While it’s true that a good portion of thrash started in the United States, many other places in the world had their say as well. One of the most prominent is Germany, which has spawned some of the best metal music in history, from power metal and thrash metal, to death metal and everything in between.

Thrash, however, will always be extra special in the history of German metal. One of the best purveyors of thrash metal’s fine timeline is the one and only Sodom. The band that wanted to be louder, faster and heavier than Venom has certainly reached that goal and done so much more. Their influence is timeless and their music is some of the tightest, heaviest and honest that will ever be heard. And with the recent revival of thrash, many classic bands have re-formed and come back to the fold. Sodom is one of the few who have never gone anywhere, and are one of few bands in metal that have always stuck to their principles.

We here at Blistering recently had the honor to have a phone chat with the man himself, founder Tom Angelripper. In this conversation, many topics were discussed, such as their massive two-part documentary Lords of Depravitytheir latest bombastic release In War and Pieces, the inaugural 70,000 Tons of Metal cruise they’re taking part in, the band’s upcoming 30th anniversary, and a ton more. Enjoy, and may Sodom continue to tear our faces off for many more years!

Blistering.com: How has the reaction to the new album been so far?

Tom Angelripper: We’ve gotten wonderful reactions. We’ve got a lot of wonderful reviews from the magazines. The record company is very happy, which we’re glad about. The German Metal Hammer magazine called it the best thrash album of the year. It’s wonderful!

Blistering.com: Both parts of the Lords of Depravity documentary were phenomenal. I’ve never seen a band documentary go that in depth. How difficult of an undertaking was that project?

Angelripper: When we started talking about Lords of Depravity, we just got an idea to record a live set at Wacken, an interview in the backstage area, you know. Then we got the idea to do something more – a big history of Sodom. We can do more – do a kind of a big documentary, a lot of history. So we started to gather material, contact former band members for interviews. It’s the biggest project that the band has ever done. And the second part is kind of a tour documentary. We want to show the people what’s going on through a long tour – if you are in backstage. Not just sitting in the bus. So much stuff from the South America tour. I’m so glad we got finished with both parts! The record company had some problems – financial problems. Two or three years between part one and two. So we got done with part two and were able to focus on the new album.

Blistering.com: The re-issue of Agent Orange was a nice package. Are there any plans for other reissues in the near future?

Angelripper: I don’t know. I’m not a big fan of doing a re-master and re-issue of an album because there are no unreleased tracks on it. But the record company can do it – they have permission to do it. When they want to do it, I’m going to help. There’s a plan – next year for the 30th anniversary – to do some special package with some bonus material, live tracks. We would like to do the first two Sodom videos on DVD, but it’s hard to find the original master tapes to do a re-cut. I think the record company is planning on doing the entire back catalogue. I heard the next one will be the “Obsessed by Cruelty” album. There’s also talk about the Tapping the Vein album. I want to give the fans something special. When we recorded The Final Sign of Evil, the record company just wanted to make a re-master with some bonus material. I wanted to re-record this with the original members, Chris Witchunter and Grave Violator on the guitars. So do something special for the people who are interested in the history of Sodom.

Blistering.com: Mentioning the bands 30th anniversary, do you guys have any special plans to celebrate that?

Angelripper: I want to maybe do a show with all the ex-members. Unfortunately, Witchunter died three years ago. But the 25 years at Wacken was like a class meeting – the whole Sodom family sitting in the back at a festival and playing a show. My dream is to make a show – maybe at Wacken or another big festival – with all the ex-members. There are a lot of ex-members that I’ve been trying, like Strahli [Dirk Strahlmeier], who played on the Masquerade in Blood record, or Bloody Monster [Rainer Focke], who played on the first demo. It would be a dream to get all the ex-members. I think 30 years is nothing that special, you know. We want to make a new album and do whatever we want!

Blistering.com: You guys are participating in the 70,000 Tons of Metal Cruise, of which I will be there for too! How excited are you to be involved with something like that?

Angelripper: It’s great! To me it’s like a holiday, being on a metal cruise. We’re going to meet some other bands and I think we’re going to have a really good time there. It’s our first show with our new drummer and we’ll really enjoy it. Each band plays one or two shows, and then there’s plenty of time for drinking and doing whatever! We need to do more in the US. This could be the first step to be in America and get somebody to promote us and to help us over for our next tour.