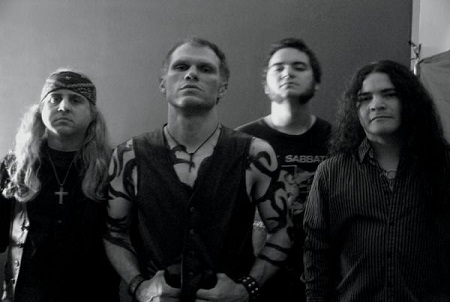 Blistering.com: Your line-up has been pretty stable, which has to help. How did that factor into the new album?

Scalzi: It’s about as stable as it can be, which is great. I’m a little bit frustrated personally with my current life status [laughs]. But the band is one of the most stable things, so that’s why we’re still out there and I’m still doing it after 20 years. I don’t see it changing – I’d just get the same thing somewhere else. It’s a little bit weird, feeling like you’re a teenager at the age of 40, but the line-up is good; they all live for music, but they have jobs, and no one has kids, so that would be the end of that [laughs].

Blistering.com: So is it easy to strike the balance between the band and your teaching job?

Scalzi: It’s not that hard because most college teachers at this point, particularly philosophy teachers, are just lecturers. I don’t have a lot of meetings I have to attend. I teach three classes and by Thursday, I don’t have any more classes to teach, so if we have to travel, we can do it. Something like South by Southwest, which we’re doing next year, you can just fly down and do Friday and Saturday, and come back Sunday and be in class in Monday. And I have Spring Break, and over the summer, then there’s summer, so we manage to get around during the time I can get around.

Blistering.com: Do any of your students have any idea that you’re in a band?

Scalzi: Some of them do, and it’s pretty weird. I don’t talk about it, they Google me. Now, it’s a generation of students, people talk about it. Since it’s a community college and a localized area, most of the kids already know each other. Last night, we played our first show since early June, and two or three kids that took my classes a few years ago showed up. It’s weird sometimes, but they want to know stuff about it, but know I’m not really into talking about it. Unless they come into the office and want to know stuff, but not during class, I don’t talk about it because people think they can get away with shit.

Blistering.com: What would you do if someone asked about Slough Feg during class?

Scalzi: If someone asked about it, I’d just go “What? We don’t need to talk about this right now, what’s the relevance?” No one does that in class, so I usually don’t get [makes teenager voice] “What’s going on with the band, man?” I’d just say, “You can look all of it up online.”

Blistering.com: Do you get nervous when lecturing or performing live?

Scalzi: [pauses] More in lecturing. I never get nervous playing live. When I was 16, I was nervous the first show I did, but after the first minute, I’ve never been nervous again. As far as lecturing, oh yeah, just like everyone is for the first couple years I would get nervous or pissed-off because I thought I didn’t do it right. I still get that way sometimes, if I’m in a bad mood. Playing a song, it’s already written, so while you can do things spontaneously sometimes, you can play the song as is and not worry about it. Lecturing, it’s the same experience, but if you lose your train of thought or are distracted or pissed off or depressed…lecturing is all about spontaneity. If you stumble or get caught up, everyone is going to know. It’s a very challenging thing to do. It doesn’t pay for shit, either, but I like it so much because it’s challenge. I love explaining these insane things, trying to do a speech to convince people and make them understand something totally bizarre.

Blistering.com: So really, do you mind being called a traditional metal band?

Scalzi: I don’t mind being called a traditional metal band, but I hate it when people say, “This band is very forward-looking.” Meaning, someone is doing something modern, then talk about us like we’re backward-looking. In a way, I appreciate it, but I don’t want to be thought about as retro-metal. I’m trying to say something that’s different, and yeah, we do rock songs because it’s fun, but I always want to say something that hasn’t been said. I try to do something at least for right now, that’s not available through other bands. At least of that level or quality that, “This is kind of special.”