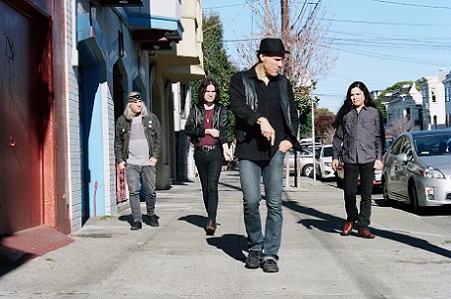 Dead Rhetoric: Moving along, you have all sorts of cool things going on with the new album, like “Habeas Corpsus.” That jumped out instantly.

Scalzi: I thought it would. It has a spaghetti western thing to it, and we never did anything like that before. That was fun, and again, there’s nothing special behind it or intentional and you always hear this with musicians – there’s nothing intentional about anything, unless you’re writing a soundtrack or something like with a scene. This was more with sitting down in the backyard with an acoustic guitar and fucking around, and this what you come up [with].

Dead Rhetoric: “Bertrand Russell’s Sex Den,” the first song. What are you trying to allude there?

Scalzi: Yes…I don’t know. [laughs] It’s a fun title that makes me laugh. Almost everything about Slough Feg in my entire life can be explained very simply by two possibly conflicting ideas: Number one: boredom, and trying to avoid boredom, and number two, resistance to change, which is nothing to be proud of. Those two things produce a conflicting thing…you end up with a lot of weird things going on. With trying to fight off boredom while living in the same place and doing the same band for 25 years, it’s difficult. [Editor’s note: Bertrand Russell was a noted British philosopher in the 20th century.]

Dead Rhetoric: But you have changed. You don’t sound like you did on Twilight, which was 15 years ago.

Dead Rhetoric: Even you saying the title makes you laugh! When I saw the title, I had a hunch there was a deeper meaning.

Scalzi: He was a weird guy. Being a philosophy professor, being a philosophy student, in general, it is a monkish lifestyle. People tend to get very sexually repressed and stuff like that, so I wrote a song about that. It’s not about anything else in particular, the metaphors in the lyrics are mixing these ideas of authority and structure, and scholarship with the more uncontrollable, animal, sexual side. [laughs]

Dead Rhetoric: Without getting too deep into the state of the industry, it’s pretty obvious where things stand, and here you are, on a bigger label with Metal Blade. However, based on our conversation, you seemed a little detached from what’s going on. Are you the type that pays attention, or does it not matter?

Dead Rhetoric: Yeah, you said you didn’t even know the sales numbers for the reissues.

Scalzi: How would I even know that if I expected an honest answer from anyone in the music industry? [laughs] I don’t think they know either. [laughs] I’m totally detached because I’m totally disinterested. I’m only interested in making music and money. I’m not interested in tedium and toil, and that’s what a lot of this stuff amounts to. A long time ago, at least three or four years ago, I remember saying to the band, “Okay, this band has been together for 20 years. I don’t want to hear from anybody ever again, ‘Do this for the exposure.’ Or, ‘Do this for the future.’ Or ‘You’re paying your dues still. There’s going to be some payback later.’”

No, we’ve paid our dues; I’ve paid my dues a hundred times over. I’ve put up with all this shit. I’ve done the work. I’ve done the touring, I’ve done the songwriting, I’ve done the local gigs, all this shit lifestyle that goes with it a thousand times over. All of this shitty stuff you have to do to get something in return. Now it’s time for the return. But if there’s no return on it, and it’s not worth it, then I’ve wasted my time. If you keep doing things for the exposure or the press, that I don’t enjoy…it isn’t fun or worth it. I said that a while ago. If it’s not fun, then it’s not worth it. “Oh, you want to do these gigs on the East Coast?” Only if they’re going to be enjoyable, or they’re going to pay…

Dead Rhetoric: Then why do it?

Scalzi: You’re going to look back at the end of your life and the balance sheet and see all of this toil with no payback. It’s time to start enjoying it, or give it up, which is what I said to myself. And I am enjoying it? I’ve been doing less tedious stuff…I’m also getting older. I don’t want to be one of these guys, “I sold my soul for rock ‘n’ roll.” I did, okay? “This is what I do: I scarified my whole life and everything for it so it shows to some extent.” I already did that, but to the point where you never grow up? Then you hit 50 and you’re this old guy who’s basically a teenager who has nothing. No life, no money, no medical insurance.

These are people a lot more successful than I am. People in bands, they keep going and keep touring, they never really do anything or make it anywhere, then end up 50 or 60 years old as physical and more catastrophes. I just saw that coming and say “No way!” No fucking way. So a lot of this empathy toward the business comes from not paying attention to everything that happens online, record sales promotion and that stuff…I don’t see myself profiting much from it. I don’t think it’s a good investment.