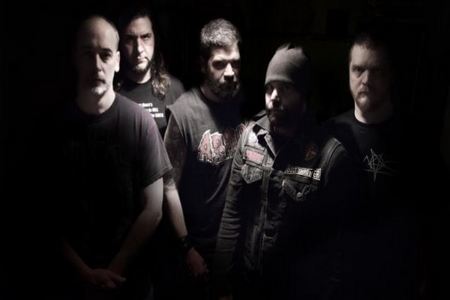 Dead Rhetoric: When hearing the classic line-up was recording again, I was thinking we’d hear a bunch of sound clips before each track. Do you feel those are a bit of a relic of the past for the band?

Webber: Here’s the thing – it’s changed a lot due to digital rights management and the profile of the band. Back then, we didn’t give a shit. We put out Progression Towards Evil on our own. We didn’t even consider the fact that it was illegal. Relapse, over the years, their profile has increased too so we just can’t blatantly rip off sound clips from movies. I guess that’s part of it. If we were particularly talented at making out own funny, comedic sound clips then I think we’d go for it, but I think we’ll just stick to playing death metal like we do.

Dead Rhetoric: On the “Skinless” music video, you could see that humor come out a little bit more, and it was kind of cool being from that region and knowing what you referenced in that video. How did the process for making the “Skinless” video go?

Webber: That was tons of fun! At first, I was like, ‘I don’t give a shit. I don’t want anything to do with the video process – just tell me what you want me to do. I’ll fly in and we’ll do whatever.’ As we got into it though, which today is through email, and some of the ridiculous ideas and there were so many that you could pick out from everyone’s ideas that made little elements of that video. That’s what made it cool and so much fun. I had always felt that type of videography and film work was kind of a drag, but this was super fun. Everyone had awesome ideas and were really engaged. There’s totally that tongue and cheek thing, so you can tell our sense of humor usually isn’t lost.

Dead Rhetoric: You did two dates in Albany after your reformation with a number of area bands like Section 8 and Stigmata. What did it feel like to be able to sell out those shows so rapidly?

Webber: We were all super surprised by how fast it went. It started out as just Skinless and Stigmata. It was kind of my idea – I work out here in the concert promotion/production world so we just wanted to put together something cool. Then I told Mike from Section 8, who also lives out here and is one of my best friends, about it and he was like, ‘I want to play!’ So it snowballed from there and they [Section 8] were a huge draw in that area. It kind of became a perfect storm. When it went up for sale, it sold out in a weekend so we were like, oh man, let’s just add another show. So we bumped up another show and we probably could have done three. That was a great little bump for the area, just because I think the scene had waned quite a bit, but having all these bands come back together and play was huge. It was just amazing.

Dead Rhetoric: I was one of the people that didn’t get to either show due the rate of it selling out. It was pretty crazy.

Webber: It was really ridiculous. We certainly didn’t expect it. It was a very pleasant surprise but at the same time, it was like ‘oh man, there’s a lot of people that just kinda got left out of this thing.’ That’s why we’ll all be back for a show again. We’ll be back in September. On September 24th we’ll be doing a show and we are putting the bands together for that one now. I would also like to do another matinee on September 25 at the former QE2, the Fuse Box. That one is more just like a party. We are definitely putting together an upstate jamboree.

Dead Rhetoric: I know you are laying low on the touring profile, but are you going to be getting back to do a few shows here and there?

Webber: Absolutely. We are working on a series of shows, basically in the fall, because everyone’s summer is so busy. We are doing Hellfest in France this month, and just one trip to Europe for one festival is incredibly taxing on everyone, with their jobs and families. That will be it for the summer, and then in September/October/November we will do a series of east coast dates and then Denver Black Sky in December. In 2016, we’ll do some more shows and keep the ball rolling.

Dead Rhetoric: You are being a bit more selective at this point with touring…

Webber: Totally. Like I said, the meeting are less frequent but more impactful. It’s not like we are just going to bang out a show. We are looking forward to it for months. We are rehearsing and being selective about how we put it together, and everything about it is much more calculated. Which makes it a really good show. And it starts with us, because we are so incredibly happy to get to that point, after months of anticipation. We used to play shows every day. Now, playing a dozen shows a year is super exciting for us. We are all just such great friends and it’s awesome to see those guys. It’s really an occasion and something everyone looks forward to.

Dead Rhetoric: You mentioned that Skinless has its own sound, and what you guys do goes against what a lot of death metal seems to be doing. Do you feel that there’s too much of a push to be the fastest and most technical in death metal?

Webber: Certainly, but that doesn’t concern me that much. If you don’t like it, don’t listen to it. We are kind of rudimentary for some people and that’s just fine. It’s no problem. I don’t listen to super technical stuff just because it doesn’t grab me. To each his own.

Dead Rhetoric: We already hit touring, is there anything else going on for Skinless in the foreseeable future?

Webber: We’ve all agreed that we’d like to make another record, so that will certainly spring into the works. We’ve had such an incredible time doing this one that it’s a no brainer for us. The distance factor wasn’t an issue for us. In fact, I think it worked in our favor. Me being here [Denver] and them being there [upstate New York], when I did fly over, we were super focused. We got more done in one practice than you could stretch over three months if you are just dicking around, cracking beers, and talking about football.