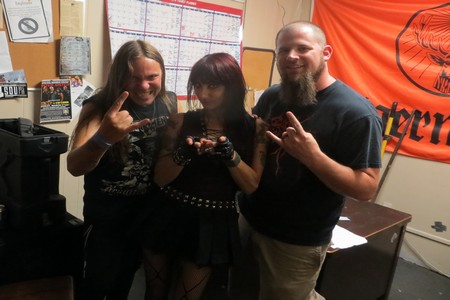 Dead Rhetoric: Going along with that, there was a bit of a stir-up recently from Liv doing the Penthouse photo shoot. Do you feel that there is a double-standard, where if you want to do what you want to do – you are judged a certain way, whereas a male wouldn’t be?

Jagrell: Absolutely – no one is judging Jimmy’s outfit, or the way he looks onstage. But people always judge me – not all people but a lot people, judge me based on the way that I look and not the way that I sound. Of course, I’m going to be judged by doing Penthouse shoot. But for me, it was just another interview and photo shoot, just like anything else. There was nothing weird or outstanding about it. I’ve done a lot of photo shoots in the past. I feel honored to have been asked. Actually, I didn’t even know what Penthouse was! It was just a huge magazine. I could choose my photographer, I chose what I wanted to wear, and I really like the photos. I think they are awesome. I don’t care where they end up being. The interview, I thought was a good interview. They didn’t ask any stupid questions. They didn’t ask any questions like…

Dead Rhetoric: Like do you enjoy long walks on the beach?

Hiltula: Or do you like big cocks or small cocks?

Jagrell: Exactly, there was NOTHING like that. There were actually very good questions. So for me, it was just like doing this interview. It was nothing else. I’m very proud of those photos…so I understand it was in Penthouse now [laughs], but when I got into it, I didn’t know what Penthouse was.

Hiltula: It was a really good opportunity.

Jagrell: I think that even all the buzz about it – even if it was bad. It was good marketing. You have to think about that.

Dead Rhetoric: It’s not like you are making millions of dollars here – it was a good reach for you…

Jagrell: And I didn’t spread my legs; I didn’t show my boobs. I stayed classy somehow. I stayed true to myself. Those pictures are totally me. I’ve done the same thing before and maybe worse, it’s nothing anybody forced me to do. I used to model – I’m not shy. If you are a model, you have to show your body. I think it turned out great – I picked the photos, outfits, and the photographer. So I felt like I was in total control, which to me, doesn’t feel like a bad thing.

Dead Rhetoric: The vocal cord surgery – since that has happened, have you changed your daily routine at all, to keep your voice going strong?

Jagrell: Actually I started long before that. In 2008 I had the same thing but actually even worse. Back then, I had to re-learn how to speak and how work my body. So it started back then. I think what happened was too much touring and too much stress. It didn’t change after the surgery, but maybe I became more aware of what I have to do in order to not go through that again. Because I don’t want to go through that surgery again. I think I just got a little lazy after a while. You think, okay things are going good – I had to think a bit more.

Dead Rhetoric: So with your entire discography in mind, where does Black Lotus fit in with it?

Hiltula: For each album that you make, you are feeling confident about it and you are feeling happy with it. But if you look at the whole discography – I can’t listen to the first record or the second one even.

Jagrell: I can’t listen to the first one either, but actually I think it fits very well to where we are today.

Hiltula: Yes! It kind of does, but that’s the past. We left a mark with it. We did those songs, we recorded it, and we were happy about it then. Everything is a constant progression, it’s like life. You are getting older, you listen to new music and everything. Black Lotus is a progression – this is Sister Sin, right now in this moment.

Dead Rhetoric: You’ve got Mayhem right now, you mentioned a couple festivals in Europe. Anything else going on for the rest of the year?

Hiltula: Hopefully we will do another European headlining tour later in the fall.

Jagrell: Then we have to start making a new record. We will start working on it at least.

Hiltula: We are probably going to tour until the end of the year, then we will start writing new music. We don’t write new music on the road because there’s no time for it. We always take time off to do new songs.

Jagrell: After heavy touring, we have to do that. So we’ll probably start writing at about the beginning of 2016.

Hiltula: That’s the plan, and hopefully we’ll come back to the US as soon as possible.