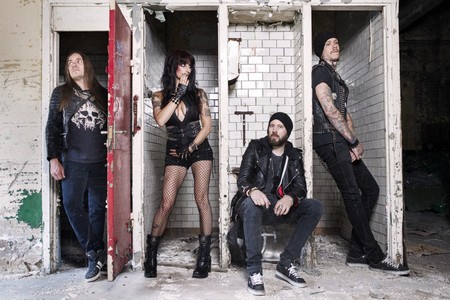 Gothenburg, Sweden is probably best known for the birth of melodic death metal, but there are other facets to the scene that still make it potent. Take for instance this Swedish heavy metal act Sister Sin. Active since the early 2000’s, they’ve steadily made inroads in Europe, North America, and even Russia among other terrorities.

Distinctly placing themselves apart from the normal Victory Records hardcore/metalcore roster, Sister Sin has gained a healthy following bringing their raw, in your face music to the metal masses – be it on club tours all the way up to festival audiences. Black Lotus is their latest record, another album that features a great balance between heads down metal anthems, good time hard rock ’n’ roll, and even the occasional left-field cut such as the semi-cowboy, semi-cinematic ballad ”The Jinx”.

While on tour in Europe for a series of fall headlining dates fresh from the release of the new record, guitarist Jimmy Hiltula took time out of the busy road swirl to answer a few questions for DR – and please heed his advice to lay off the selfie/photo action when seeing the band and just rock. Being present is a vital part of metal’s enduring appeal.

Dead Rhetoric: How does a Swedish band in the street level metal style gain the interest to sign with a record label like Victory Records – more known through the years for their ability to push hardcore, death metal, and metalcore acts? Do you think this is an advantage in terms of proper promotion to be different from the normal roster act?

Jimmy Hiltula: When we signed with Victory back in 2008 it was actually a lucky shot. We had sent around our demos and links to our social media sites to many labels. When we sent our stuff to Victory Records we knew that they were a big label for hardcore and metalcore acts but at the same time we also knew that they had the right tools to get us out there. They replied immediately with big interest so we went for it! It´s hard for bands these days to be selective when it comes to labels, I mean, it´s not like you get tons of labels wanting to sign you. If you are even lucky to get a response you´re most likely to get turned down. Since our first release with VR we´ve had great cooperation, and as I mentioned earlier in terms of promotion, they certainly have the proper tools for it.

Dead Rhetoric: Aggression and explosive energy are hallmarks for the best heavy metal records in my opinion – and I feel like the new album Black Lotus is another benchmark Sister Sin release in a fine catalog to date. Where do you see this release in your discography, and did you go about things any differently in terms of recording techniques, performances, types of instruments used, or are you pretty set in the Sister Sin style?

Hiltula: We are very happy with how the album turned out and to be honest it´s really hard, four albums in your career to still top the previous ones. We managed to do that this time around as well. Black Lotus certainly is a milestone for us, it´s a huge leap foremost when it comes to the songwriting process. Myself and Dave locked ourselves up in our rehearsal place for about four months and just started to hammer out riffs and melodies. In this way we didn´t get distracted by everyday stuff since we put ourselves in a kind of closed environment, so I think there was an even more focused approach to the whole thing. The recording process was a bit different too. We worked simultaneously in two different studios with guitars and bass in one and just focusing on vocals in the other one. But I don´t think this helped for the end product, it was bascially just to get everything more effective. But what really did matter in the sudio was the awesome work by the producers Rikard Löfgren and Gustav Ydenius, they are true geniuses. They worked hard to get us the best sound possible and they had great input on the songs. I love having a third party come in and give fresh new ideas. It´s so easy to be blind when you have already spent 4 months with the stuff. But in all, we still stick to our Sister Sin formula, that just happens. It´s really nothing we have to focus on maintaining, it´s now built in our backbones.

Dead Rhetoric: “Sail North” features a killer duet between Liv and Jimmy – where Jimmy has a lot of Vince Neil helium-oriented melodies throughout. How did this track come about, and will this be something explored more on future Sister Sin records?

Hiltula: ”Sail North” was the last track we did before hitting the studio. We felt we needed a fast paced song in the true vein of Sister Sin and we experimented with a key change from the verse into the chorus just to make it more in your face and bigger overall. Dave wrote the lyrics and wanted the words to be blistering as well so in the studio we realized that instead of having Liv just spitting out all the words herself why not make this a duet kind of song? Since the lyrics are somewhat leaning towards a comical feel of the boredom of growing up in this cold ass country the duet thing just added more to that. I don´t think we hit a jackpot with having myself and Liv trading words, it was just a funny thing and I´m certainly not a singer anyways haha. So I’m not sure if this will continue or evolve onto the next album.

Dead Rhetoric: Your newest video is for the song “Chaos Royale”. Tell us about the treatment of the video, who directed the shoot, and how to do you feel about the medium in today’s social media driven world compared to the MTV Headbangers’ Ball heydays of the 1980’s and early 1990’s?

Hiltula: The story in the video directly reflects the lyrics with that ironic touch towards starting a metal regime and ending all other politics. It was pretty easy for us to come up with the basic idea. We then presented our thoughts to the 11 Frames Production guys and they were totally into it. So they polished all the details with actors, props etc. Then we went in and shot the whole thing in 2 days. It´s equally important to have videos as a visual part of the promotion today as it was back in the 80´s and the 90´s but it is much easier and less expensive to make a cool video these days. So it´s hard to stand out I guess.

Dead Rhetoric: How would you compare each album that Sister Sin has done in your discography, especially in terms of good memories, outcomes, and changes (if any) you would like to make given the time to reflect upon them?

Hiltula: First and foremost I´m very glad that we have evolved with each release and have not stayed in the same spot. Dave and I have also grown a lot as songwriters, we´ve learned so much stuff up until now. Our first album Switchblade Serenades was basically a bunch of demo songs that we recorded and it defines us so well from that era. Pretty new to the whole thing, and I (at least) can hear that we still had a long way to go in search for our sound. True Sound Of The Underground was the first time that just Dave and myself wrote songs. Our bass player who also wrote had left the band so this was the birth of a newer and harder Sister Sin sound. We wanted to take things further and at that time around 2009 we set the standard for our sound. With Now&Forever it was all about maintaining our sound we had built, we were frankly a bit nervous about it but at the same time we wanted to sound even more agressive that previously. We tuned down our instruments on a few songs to sound heavier and more crunchy which turned out great. We had some issues with the mixing but forutnately Cameron Webb stepped in and saved the album, still very proud of it!!

Dead Rhetoric: Coming from an active music scene in Stockholm, are you satisfied in terms of where you are at a decade plus into your career with Sister Sin? Do you feel like there is a good chemistry with other metal bands in that part of the country – willing to share ideas and thoughts to better the scene?

Hiltula: I’m very satisfied on where we are in our career right now. We have released 4 albums and done many tours through the years. Somehow we managed to pull it off though the industry is a harsh place to be in as a band. There are many bands here that play and tour together, but I think mostly ideas are shared when it comes to business strategies and places to do shows for example. We are at a point in Sweden where actually rock clubs and smaller venues are closing down unfortunately, it´s harder to keep the scene active now than 10 years ago.