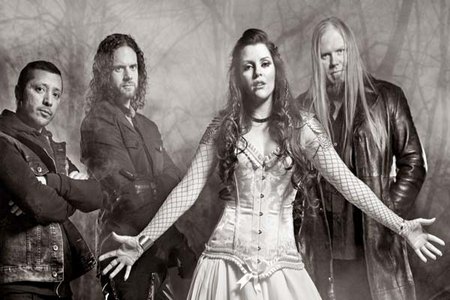 Dead Rhetoric: Being back on Napalm Records must seem like things have come full circle after four albums on Nuclear Blast…

Veland: Yeah, it’s like a homecoming in a way. It feels nice. In the meantime I released a solo project of mine on Napalm Records (Mortemia), we’ve been in contact the whole time as well. I had a good time on Nuclear Blast too. We had a contract with them for 4 albums and we finished the contract. For the next negotiations we thought Napalm Records had the best offer for the band. At this point we thought it would be best for us to go with Napalm again.

Dead Rhetoric: For the most part you do not use a bass player live (the last time I saw that happen was for Dark Tranquillity on their recent tour) – any particular reasons why?

Veland: It has always been like that for us. We are four people, so it obviously saves a lot of cost when we are on tour, a lot of space on the stage also. There are people that are not into the idea of having a programmed bass, but then again I have seen other bands doing this as well. We started that in the beginning as we didn’t have a bass player, and after some time we got really used to it. There was one point later where we had a bass player for a couple of shows only, afterwards we went back to the same lineup of four people. It’s something we consider every now and then, maybe in the future we will bring in a bass player. If we were able to find the right guy that could play bass and sing clean vocals really well, all the social things are there it is possible that we will bring on a bass player in the future.

Dead Rhetoric: Out of all the records you’ve recorded with Sirenia, which one(s) would you consider the game changers as far as establishing the proper direction for the band, and is there anything in the catalog that you think is vastly underrated?

Veland: We began our career and we found the style we wanted to play within the first two albums. They are more or less in the same direction, so with the third album Nine Destinies and a Downfall, we came to a point where we needed change. That album was a big jump and change of style, a lot of old fans got a bit disappointed with that album. On the other side we got a lot of new fans, afterwards we did three albums in this melodic direction, and then with Perils of the Deep Blue we started going into a little more into the metal style with longer songs and more intricate arrangements. We’ve been changing over the years and it’s been a natural process. We can’t stick to the same style for seven albums- it will make you lose motivation and interest in a way. Of all the albums we’ve done, The Enigma of Life has gotten most of the bad reviews. Personally I don’t understand why because I really like the album myself. There are a lot of strong, catchy melodies on it – but maybe that’s the problem for the metal fans, it was a bit too catchy in a way. By the next album, all the good reviews came back. I think it’s a natural thing for most bands when you are at a point in a career where you’ve released seven albums or more, somewhere along the way there will come an album that will not get as good of a response as the rest.

Dead Rhetoric: So how did Ailyn break bones in both of her feet over the course of 2014? What qualities do you feel establish Sirenia as special because of her vocal abilities?

Veland: Actually I don’t know how, but she broke her bones in her house. It’s a bit of a mystery the whole thing. What I always have liked with Ailyn’s voice is that it’s a sweet and beautiful voice, and making a big contrast with our music. That’s something I have always been very into. All of Sirenia’s music is based on contrasts, mixing the elements of metal music, the classical parts, (and) the vocals with the growling. To me it adds that contrast and that’s what I’ve been searching for. We wanted a modern style of singer rather than the typical classical, opera style singer. We have opera singers in our choir so I feel that element is covered as well. Having a singer like this you get more of a variation with the music and that in my opinion is better.

Dead Rhetoric: The new video is “Once the Light” – a mixture of conceptual footage as well as intertwining band performance aspects. Who developed the treatment, and how much importance do you think videos have in this day and age?

Veland: The video was shot in Serbia, in Belgrade. It’s the same guys that have done several of our videos in the past Icode- this is actually the fourth video that we’ve done together with them. I think it’s good for the internet, especially YouTube. You can get publicity and you can show your fans what you are doing. It’s possible that other people, potentially new fans can discover the band through such channels. With this kind of music we play, it’s very rare to be seen on television. The internet is even more important for us than television, it’s nice if it’s possible to make at least one video from every album to have at least something to show for the fans.

Dead Rhetoric: The song “Ducere Me In Lucem” from 2013’s Perils of the Deep Blue will be featured in the soundtrack to the film Abandoned Dead – how did this opportunity come about, and is it exciting to hear Sirenia’s music in this format?

Veland: This will be our first time that our music has been used for a film. It’s a new and interesting experience. The movie is not ready yet, but I am looking forward to seeing the film and see how it would work out with our song in there. It’s a nice thing, another artist contacting us to use our work is kind of a quality mark. We have done something special for this to happen.

Dead Rhetoric: Where do you see the state of the symphonic/gothic metal scene today? It seems to be a genre that is healthy on a global scale in terms of variety and stature…

Veland: Yes. For me it’s been like a small genre, since I began playing in this kind of style back in 1994/95. It was a really small, underground kind of thing. There have been a few bands that have had big success with this style, but I really think it’s quite small. This is more or less a niche genre.

Dead Rhetoric: What are some of your other hobbies/passions you like to pursue in your downtime away from music and running your own recording studio?

Veland: I collect cognacs, red wines, all kinds of special beers. I like chess a lot, I am not a great player but I love the game, I could easily spend hours playing. Fishing, I find it’s a very perfect way of relaxing and recreation. I really love the nature, being outside in the spring time when nature is waking up from winter’s sleep and a fun time of year. Walking in the forests and the mountains is wonderful.

Dead Rhetoric: How do you see the next 12 months shaping up for Sirenia? Any hopes for a tour run through North America?

Veland: I hope so! It’s something we’ve been trying to make happen for quite some time. I don’t know why, it’s been a bit difficult because we have toured in South America, Central America, all over Europe, Australia even. I don’t know why it has been difficult for us in North America, maybe this genre isn’t big enough in North America or maybe Sirenia doesn’t have a big enough fan base in your country yet. We really hope we will be able to make happen in the near future.