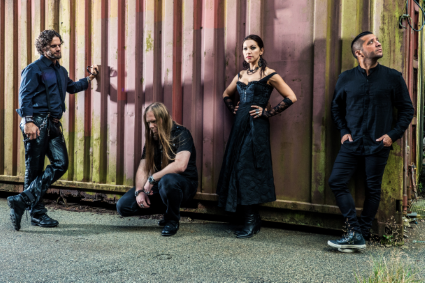 Dead Rhetoric: What expectations do you have for this forthcoming European tour with Tyr, Unleash the Archers, Xaon, and Relicseed? This seems like a killer, diverse package for the fans of various sub-genres of metal…

Veland: Yeah, I actually have great expectations. Along the way, there have been a number of different problems that have cropped up. One of the problems was according to Tyr – they come from the Faroe Islands where the whaling industry goes back for generations and generations, it’s a cultural thing there. There have been animal rights groups all over Europe making hell about that, making hell for Tyr and they have had to cancel six of the concerts. These groups haven’t stopped there- they are trying to get all of the other bands cancelled as well! It’s like a big bomb dropped on our heads, we didn’t know anything about this before the tour and it was totally unexpected. We are still determined to go through with this tour, and I have no idea what the results will be from all of this. We are booked to play concerts and playing music is what we live for, mixing music and politics like that is just wrong. Activists have a problem with things going down at the Faroe Islands, I think they should go after the government and the political elite. Attacking a metal band wouldn’t really help very much, and attacking other metal bands from other countries that have absolutely nothing to do with this is just a total shot in the dark. It’s something crazy that we never would have expected. We will proceed and do our best for everybody coming to the concerts.

Dead Rhetoric: There’s a lot of discussion regarding the use of computers and backing tracks in live situations to replicate fully band performances. What is your stance given the fact that you don’t have a full-time bass player at your disposal?

Veland: Yeah, that’s a result of the situation of the music industry is in these days. It comes down to money also, we are coming from Norway which is probably the most expensive country in Europe. For us travelling around to concerts, it’s difficult- so one of the tools that we have to even make this possible is to do some of the things on back up tracks. With Sirenia right now we are not one of the really big bands, hopefully we will be a bit bigger in the future so it will be possible to at least bring a bass player on the road. It’s something we’ve wanted to include in the lineup for quite some time, we even tried it at one point. If we include one more member, that’s one more flight from Norway, one more hotel room – we end up playing less concerts. Right now we have to do this in this way, if the band continues to grow a little bit in the future then we hopefully will be able to bring a bass player in as well.

Dead Rhetoric: Being a lover of nature in Norway, how do you handle the changing seasons there? I’ve heard that the winters can be very cold and harsh with lots of snow… is that why you have an affinity for the spring-time?

Veland: Yes. A lot of the people when winter comes it is depression that overtakes them. I try to turn the winter into something positive. It’s dark most of the day, cold, and snowy- it’s hard to go to the supermarket or even pick up your mail at the post office. For me it’s a perfect time to lock myself up in the studio and be creative. I find this time really inspirational, so I am very productive in the wintertime. Especially in terms of music, composing and creating. Every time when March comes and you can see the first signs of spring, it feels like a relief. I love November, December, the beginning of January- but by February you feel like the weather in winter is starting to take its toll on all things.

Dead Rhetoric: In a past interview with Echoes and Dust webzine, you mention a love of Slash’s guitar playing and that melody has always been more important to you then the technical aspects when it comes to your style. How do you balance melody/feel versus technique – can one overshadow the other, especially when it comes to the metal genre?

Veland: Yes, I think so. On the other hand this is more a question of personal taste. I try to balance it out as well as I can, according to my own forces. On the last few albums the technical things have gotten a bigger space than before- before it was more melody. You need to try something different at times, it felt natural to do that. It’s important for me that we sound like Sirenia, so we won’t take it too far though. I want to balance that out- the good balance between the melodic and the technical. The melodic aspect weighs heavier- and the best ideas I find in music are the most simple ones.

Dead Rhetoric: I’ve also read that when you listen to music for pleasure, most of your playlist would be artists of the pre-2000 era. Any particular thoughts behind your love of older music versus the current generation?

Veland: It’s hard to say, I think that might be the same for most people- the music that you grow up with, as you get a bit older you get nostalgia regarding music of the past. Putting on an album from the days when I was a teenager- it’s pure magic to me still. There’s no new album that can compete with that. There is still lots of cool music coming out these days, it’s refreshing and cool, and there are interesting bands to listen to. But the music from the period I was growing up, it has that magic about it that can’t be recreated or impossible for a new act to create.

Dead Rhetoric: There were a couple of moments on the new Sirenia album where I felt that you were reaching back into your love of Paradise Lost for instance…

Veland: Yes, Paradise Lost is one of the bands that I still listen to from my childhood. The Gothic album especially, the first time I heard that combination of the growling vocals and the female vocals – I just fell totally in love with that beauty and the beast concept thing. Paradise Lost was one of those bands that opened my eyes to a whole new thing in music. It’s very rare that this happens, but those guys did this.

Dead Rhetoric: Have other musicians sought out advice from you either concerning equipment, playing tips, technique, or the business/ contracts aspects – and if so what do you talk to them about?

Veland: Yes, this happens from time to time. I have some years of experience, most of what I’ve learned has been the hard way (laughs). So, I can give friends and other musicians a little advice here and there. I was never the guy into the contracts and business aspects- I’ve learned a lot of things in this aspect as well. To me I’ve cared more about the creating, the recording, the mixing- those things I really find fascinating to put all my effort into becoming better at over the years. I guess I would be better giving advice on these things.

Veland: The next thing will be the release of a video clip for “Dim Days of Dolor”, the title track of the album. It will be our second single, out probably next week. We will start our European tour in November, and be on the road until the 28th. In 2017 we will continue- we are working hard at this point to get some sort of tour going in North America for the first time. We have tried for some time, but we were never able to make it happen. We have some new contacts and I have some good hopes that it will be possible to bring Sirenia to North America in 2017. This is our main priority at the moment- getting more gigs in general is the plan for 2017.