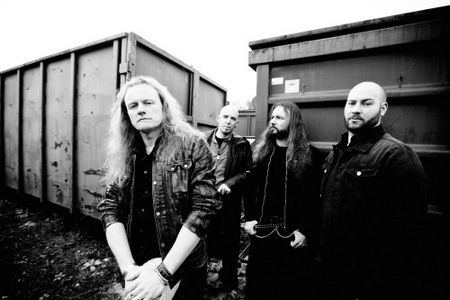 Dead Rhetoric: The scene in Germany seems to be very in print magazine driven still, correct? Magazines like Rock Hard and Deaf Forever, do they have more power than the internet to drive tastes?

Laurin: I would agree. This is changing, but the magazines are changing. Eight years back in time, I would say they were ten times bigger in sales. So there is a huge impact in how people want to get their news and articles. There are still a lot of people here buying the magazines on a regular basis, but like all paper media they have to change the way they are distributing their information and articles. I really do like a magazine, I buy Rock Hard for example once a month- but when it comes to news and current information I use the internet. I don’t see any good portals in Germany, so I use American news sites for that.

Dead Rhetoric: Do you ever feel having a birthday so close to Christmas that you get ripped off as people in your family may combine two presents in one instead of rewarding you with gifts for both special occasions?

Laurin: (laughs). I have never felt that way. When I was a kid… most often I got one bigger present, and I got it on Christmas and not on my birthday. Yes, it was a bigger present, but (I feel) parents will give the person two presents if they were six months apart. I’m totally cool with it.

Dead Rhetoric: Looking at your Facebook personal site, I was surprised to learn among your 25 most influential records there were efforts by Mortification, The Black Dahlia Murder, and Billy Joel. What do you enjoy most about these three particular bands/artists?

Laurin: Yeah, you picked three pretty cool ones. Mortification, their record Scrolls of the Megilloth I got into when I was a teenager, a total rebellion phase. It’s insane, the vocals are way over the top but the musicianship is awesome and the songwriting skills are super cool so I really fell in love with that and two or three other records they did. The Black Dahlia Murder is the same, it influenced me in a way how their production was, how tight they play- not with what Trevor is doing vocally, because I’m more of a guitar and drum guy. Listen to it by headphones I’m impressed with how accurate and cool they perform. I enjoy the riffs and musicianship. When it comes to Billy Joel – I do see my role as more of a producer and performer, outside of being a musician. He has put out so many cool songs and records year after year, and he’s a performer with a piano. I cannot sing, but Billy can do it all. He can do rock, he can do pop, he can do ballads, and perform like a young guy and sing. I have all the records, he’s coming to Frankfurt, Germany this year and I already have my ticket to see him.

Dead Rhetoric: Has your music consumption increased through the years – or do you still enjoy the art of intense sessions with your favorite albums in an age where digital media rules the roost so to speak?

Laurin: That’s a bit difficult. Having a day job and then in the evenings working on Sinbreed, my whole day is totally stressed out. There is no time to grab a glass of wine and listen to a new record because I’ve spent all of my free time working on things related to Sinbreed. Songwriting or recording, managing the band and looking for live gigs, so there is a lack of looking for new bands and records. Once the album is out and comes back to normal, I will look at what is coming out and listen to more material. At the end of the day I am a huge heavy metal fan, I do enjoy finding new bands and I will put my focus back on this.

Dead Rhetoric: How do you feel about metal cover art through the years – do you see it as an important mood setter prior to listening to a record? And what have been some of your favorite covers in the metal realm?

Laurin: It’s quite obvious that unfortunately cover art hasn’t been as important in current times because record sales are not back- even if vinyl is coming back- people can much quicker check out a song online than look up cover art. If I hear a new band, I will at first listen to it on social media, then find the cover to see when it’s coming out. For me as an artist, I do see the problem from the fan perspective, but it’s important for the fan to get the whole package- high quality band photos, nice artwork, the digipack development. What AFM came up with for us is great, the gatefold vinyl, I really do like it. It’s a two-sided sword, and somewhere in the middle stands the truth.

I’m a big fan of Andreas Marschall, who did a lot of paintings for Blind Guardian through the years like Somewhere Far Beyond. The Ayreon ones are great too. What Iced Earth is doing, they use different painters and I like their style very much.

Dead Rhetoric: Being a sports fan of the American football and basketball persuasion, who are some of your favorite teams – and do you participate in these activities yourself from time to time to keep the brain and body in shape?

Laurin: I do play basketball each Tuesday. I really do need this, when I come from work I play basketball for fun with some friends. I need it for the health and body. I am an LA Lakers fan, I have a lot of merchandise of those guys. Back in the time when James Worthy and Cedric Ceballos were popular, my 90’s time when I was a kid. New England Patriots (is a favorite) when it comes to the NFL, but I’m more of an NBA guy. When it comes to baseball, you will laugh right now but I am like a dumb ass European who doesn’t understand why this frigging game is taking so many hours! (laughs) The best thing I know about baseball is the Billy Joel concert and album Live at Shea Stadium.

Dead Rhetoric: What does the touring situation look like for Sinbreed this year? Lots of one off shows, small tours across Europe – any hope for something a little longer in North America, even if it’s like an East Coast or West Coast jaunt?

Laurin: Yeah, that’s one of the biggest problems as you may know currently that Herbie joined Avantasia. So scheduling around them it’s giving us a hard time, it’s a big chance for Herbie and he deserves to be a part of such a huge tour. Hopefully we will be able to play some summer festivals and a fall tour, there is plenty of time to perform this material. We have three shows confirmed for April, hopefully we can do this for the US. If there is anything possible we are trying to make it possible.

Dead Rhetoric: Are you surprised by the blockbuster success of Avantasia?

Laurin: Avantasia is now much bigger than Edguy, I have no valid information about this but it’s what I believe. At the end of the day Tobias is a smart businessman. I don’t know if you’ve heard of the European songwriting contest? When this airs it’s the biggest music songwriting contest in the world- 500 million people watching it. This sounds totally insane, 30 countries can participate and have their own bands in that round. This week Avantasia is in the German election and if they win the German division they will be a part of this. He’s a smart guy, a phenomenal singer and songwriter.

Dead Rhetoric: When you think of the term success, what does it mean to you? And who would you say are a couple of bands that you would love Sinbreed to model their career after?

Laurin: When it comes to success in 2016 to be quite honest, it would be a success if the money that we spend and the income would equal out to zero. We put so much work into it, our private money, and yes the record label funds the recording, but to have the quality that Sinbreed stands for there’s much more of our own money to put in than is coming back through the record sales. I know that other bands are facing the same situation and it’s really a pity because there are so many talented bands. I wish you could get things to balance back to zero so that bands can do this for another 20 years.

We were talking about Iced Earth, I do remember reading that Jon Schaffer was living in his car back when he first started the band. Iced Earth was his baby and he would do everything for it to get success. I have to admit I could not imagine living in my car, I prefer sleeping in a bed. Jon Schaffer and Iced Earth really deserve their success, I salute him for this and this would be a band I would have Sinbreed follow in a certain way- his merchandise and quality standards are really good.