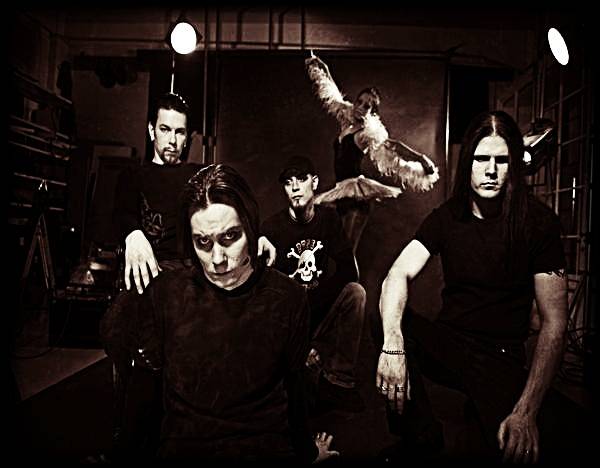 Sinamore’s 2006 A New Day platter was good, solid melodic Goth metal, but it lacked that it factor that grabs hold of you with those long, trembly black fingernails and never lets go. Give credit to the band: A New Day was the product of several delays and lineup squabbles, so the want and desire for a follow-up was certainly there.

True enough, Sinamore’s newest effort Seven Sins A Second is the culmination of a band coming into its own. The songs flow like a seamless river, decorated by gorgeous melodies, challenging, but immediate song

structures, and the know-how to create the kind of songs that embed in one’s memory for days. In what was a rather slow year for Goth metal, Sinamore emerged as the best band with the best record and closed out ’07 with a bang.

The new year will see a very busy Sinamore, with live dates in the works and a much-needed promotional push from the ever-growing Napalm Records. Guitarist Tommi Mulhi checked in with Blistering to discuss a myriad of things ranging from development, the excellent new album, handling those frozen Finnish winters and what lies ahead. Here’s what went down…

Blistering.com: It’s been a long haul for Sinamore since your inception – fill me in on the last two years since A New Day.

Tommi: I think that the biggest thing that have happened to us is that we finally got our asses out from Finland for gigs! I think we toured something like nine countries, .some of them countries that we would have never even visited if we weren’t able to play there… like Croatia, Slovenia or Serbia. That’s something that we would like to do more in the future as well – playing abroad. The rest is just writing new music

, practicing and recording. Nothing special in a way.

Blistering.com: With your first professional release under your belt, in what ways did the band develop?

, I think…or hope. And of course we’ve learned a lot about working in the studio and were more relaxed and focused on the stuff going on tape. I don’t know if the material has changed that much, but the way we work on it have developed a bit. We now know what we want the stuff to sound like and are more confident about our ideas and arrangements.

Blistering.com: Speaking of which, with Seven Sins A Second, it’s obvious you were more focused on immediate, hook-laden songs. How did you work on this approach?

Tommi: It all came pretty natural. We never decided to work this way…we just continued from where we left with the last songs

that found their way on our debut. Now when the second album is out we have already started to work with new stuff – actually, we never stop writing or take breaks. If something new appears on rehearsals we start working on it right a way. Maybe the hookiness comes from the fact that we want all of our songs to have something to surprise you: a melody or a riff that grabs your attention. That’s the only thing we do on purpose when writing songs. If it’s not an immediate hit at the rehearsal room we forget it. The songs have to be something that we personally like to listen to.

Blistering.com: “The Burning Frame” is the closest thing you have to an actual title track. What’s the significance behind the album title?

Tommi: Well, if there is any concept on the album it might be about the fact that people just don’t care about their actions anymore. They see the world they’re living burning in front of them and just ignore it or hide the shit into another hideous action. The history just keeps on repeating itself…people don’t seem to learn from their mistakes even the world would penetrate them in the ass with a flag saying, “This is wrong, m’kay?”

Blistering.com: “Better Alone,” “Dressed In White,” and the aforementioned “The Burning Frame” are clearly your heaviest songs to date – what prompted this new-found heaviness?

Tommi: As I said earlier we didn’t do the changes by purpose – it all just came out sounding as it is. There was some darker material on A New Day as well, mostly on the last tracks that found their way on the record. We kinda just continued from where we left with the old stuff.

We are all more or less fans of doom, thrash and more extreme sides ofmetal music as well as some easier

and melodic stuff. So, SSAS could be described as a melting pot of all our different personal influences. This time we all took more part in arrangements and worked more as a band with the songs. The stuff is still mainly composed by Mikko (our singer/guitarist), but the rest of the band have started to be more active in the writing process. That’s why I think the new album is more versatile compared to our previous work.

I totally agree that the stuff is harder and darker, but at the same time the melodies have more important role in the package. It’s not all about dark and hard riffs but about catchy, even pop-ish melodies that gathers it all into one. It’s just all delivered with a punch in the face. We’ve just become obsessed with painting these sad and melancholic moods and vibes into our music – the darker the better. With this record we wanted every thought and sound to be bigger and definitely more dark.

Blistering.com: “Dressed In White” is an extremely memorable song, very melodic and dreary – what’s the story behind this one?

Tommi: At first, “Dressed in White” was much faster

and more punchy song in a way. At some point we came up with an idea to cut some hits away and slower the tempo. It’s a weird song in a way that when you think it’s going to go faster it slows down. The song grows in every part a bit. In every part a new little something is added to the package. The lyrics are about a situation when you think you’re safe everything starts to collapse again…