Sitting around trying to gather up the last of the Bandcamp albums for this month was no easy feat. With so much being put forth, and knowing that next month’s feature would be the “Best-of” for 2015, it was hard to narrow the choices into a reasonable number. So we’ve squeezed as many as we could in for this end. Know that you are looking at the cream of the crop with these releases (as per usual). This month we feature Act of Worship, Chronoboros, Dark Symphonica, Enthauptung, Hath, Nylithia, Olathia, The Mire, Ulvesang, and Variscythe.

With a title like Dominate Eradicate, it’s easy to see what Act of Worship are up to. There’s no better way of describing the band other than death metal, through and through. They manage to do everything right by the books, yet it stays interesting from beginning to end because of the authenticity of it all (and some great songwriting). The riffs, vocals, and drumming are downright brutal. The leadwork is varied and leans towards the catchy side without compromise. It all comes together to create a crushing experience of pure death.

Chronoboros offer up some occasionally explosive noise on Dialing Up the Cutter. With some nods to bands like Neurosis and Unsane, there’s a layer of sludge and hardcore riffing that gets pushed into these violent and crazed portions with shouting, such as the blistering opener “Gut Tracker.” Other tracks, like “Bison Unit,” move into quieter segments and allow for maximum devastation when the band punches the throttle. There’s some groove within the sludge, as heard on “Harpoon,” that makes the music pretty easy to swallow, even if you aren’t one for the “noise” genre. Chronoboros have a good thing started here.

Dark Symphonica managed to avoid a lot of pitfalls with Immersion. They’ve managed to take the bombastic nature of symphonic metal (complete with female vocals we might add) and merge it with a heavy dose of thrash to create something rather compelling. The thrash elements give it a much harder edge than the genre is typically known for, and allows the riffs to take more of a centerstage role. The symphonic aspect is quite prevalent, but it is a good fit for Sam Wolstenholme’s soaring vocals and they know when to pull back on them to let the rest of the band shine.

Being a New Yorker who used to spend a good chunk of time in the Adirondack Mountains before moving down to the Hudson Valley, the title of this album was enough to make it worth checking out. But nostalgia alone can’t make an album great. Thankfully, Enthauptung deliver some variations from the usual theme. For one, the music sticks to the more aggressive end of the spectrum (compared to the more acoustic-based Cascadians) and the vocals are quite visceral and raspy. Lots ‘o blast beats to be found, and the overall pacing keeps things moving in the lengthy songs, balancing nicely with the occasional atmosphere. Good for those looking for a little more intensity with their forest-y black metal.

New Jersey’s Hath have a decidedly Scandinavian take on their approach to blackened death metal. By that, it means that despite the mountain of heaviness the riffs tend to pull in, there’s some not-so-subtle melodies that merge along with it. One might make the argument that these melodies are a bit “Opeth-ian” but that would discredit the band’s firm grasp on songwriting. Hive is often flirting with melody, but never at the expense of the burly death/black approach that oozes from the speakers. The vocals are top shelf too, with the monstrous lows radiating some serious strength (and keeping them further away from the Opeth waters).

The most striking thing about Hyperthrash is just how fun the album is. Despite being modern thrash that would go hand in hand with bands like Revocation or Black Fast, it’s decidedly upbeat and doesn’t take itself too seriously. The guitarwork itself is serious of course, but with songs like “Whips & Chainz” and “Fast All the Time,” there’s a more campy approach that is a welcome change from the norm. The songs are all hook-fests despite the frenzied playing, and you’ll find it hard to get them out of your head (not that you’ll want to). This is the type of album that could really explode on the scene if given the opportunity – let’s hope it gets the chance to do so.

Watching Olathia open for Amaranthe during a road trip to Cleveland a few weeks back, their live performance made enough of an impression to check out their Bandcamp site upon my return home. Hunters relishes in traditional heavy metal glory – galloping heavy riffs, fiery solos, and the powerful vocals of Chris E. There’s a more modern edge that keeps it a bit heavier overall without abandoning the classic vibe. The material is also loaded with hooks, both in the riffs and vocals, making for a rather memorable start to finish listen that should find appeal with fans of bands like Iron Maiden as well as Arch Enemy.

Ulvesang aren’t “metal” in the traditional sense. In fact, Ulvesang are an acoustic entity but there’s such a feeling here that is normally reserved for the Cascadian black metal bands that it’s hard to shake. Very folky, earthy-type stuff to be found, it’s almost if they took the Cascadian black metal bands and simply removed the blackened core and presented the remains. The compositions capture the imagination, as they should with this type of music, and the combination of beautiful acoustic guitars with male choirs and occasional nature sounds is hard to beat. This type of sound can seem to drone on, but Ulvesang seems to get what works and keeps it much more compelling than some of the other bands doing this.

Sadly, The Mire have dissolved following the release of this EP, but it stands as a testament to their work. Glass Cathedrals saw the band finally generating a good chunk of buzz with their sludgy post-metal, and Vice Regalia does not play it safe. Adding in faster tempos and blackened riffs, blast beats, and some hook-ridden clean vocals, it takes The Mire and adds some new dimensions to their sound. You may be taken aback by “Hell Libertine” but you’ll warm up to it. The band never really make the same album twice, so it’s suiting that they go out with a bang. RIP The Mire.

Does the world need another thrashy melodeath band? If they sound like Variscythe, the answer is a resounding yes. While not really adding much to the overall formula patented long ago by At the Gates and later Mors Principium Est, Arise, and Callenish Circle, Variscythe keep things decidedly uptempo and energetic. With an album like this, the riffs really need to work and they can check off that box here. Cuts like “Shattered” and “Withheld from Light” are sure to sure to get the listener into a frenzy with the tastefully thrashy tempos, and the groovier songs like “Unveiled” will get necks moving. Quality Gothenburg material here, sans the cheese factor. 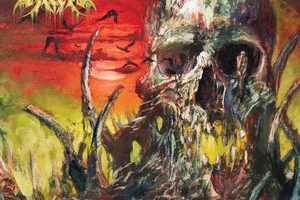