It’s never quiet on the Bandcamp front, so we are going to skip out on the small talk this month and just dive right into the ever-growing number of fantastic bands who’ve released some quality releases recently. Up for investigation this month are Agoron, Aresea, Carnival Leave, Cruelty Exalted, Dead on Mars, Decrescent, Estuarine, Infallible, Inverted Earth, Killing Capacity, Novaria, and The Weapon.

As each month usually goes, there’s never a shortage of brutal, slamming death metal to fill that void in one’s life. Agoron nail the genre, with a sound that takes the brutal/slam aspects and brings in some technical vibes and monstrously over the top vocals, yet manages to keep a semblance of order. While entirely unrelenting in tone, the increased ante with musicianship makes sure each track still has some memorability to it without compromising the abrasive core of their approach. They aren’t afraid to step outside of the box once in a while (those chanted cleans in “Nature” are killer), which is all the more reasoning to give them a shot.

Right up the alley for fans of bands like Within Temptation and Nightwish, Aresea provide a gentle approach to their symphonic sound. Occasionally bombastic and huge (“Will You Find Me”) and more dreamy and serene (“Beyond the End of Time”) when needed, their sound runs the gamut. Some drops into heavier territory are appreciated as well (“Damned Destiny”). Solid instrumentation and vocals that are up to the challenge of carrying the burden at the more melodic moments, plus there’s a pleasantness in the band’s approach, even in their heaviest material, which is sure to win like-minded fans over.

A single release that follows the band’s first EP from 2016, Carnival Leave don’t bring scorching heaviness as much as they leave behind plenty of emotional residue. “All This Way Through” gradually builds itself up across its runtime, driven by some powerfully emotive vocals and sullen guitar melodies. It may be melancholic, but it’s still quite catchy in nature – easy to get stuck in your head and fire off the repeat button a few times without questioning it. An easy recommendation for those into bands like Forever Still or End of the Dream. Hopefully there’s more material coming down the pipeline soon.

One of those cases where the actual output of the band is far more widespread in tone than a simple genre can provide, Cruelty Exalted may look like a retro act but they really encompass a great deal of variety. From old school to modern, from proggy influences to tech – Cruelty Exalted hit all the marks while providing a flowing and seamless experience. It’s brutal with a melodic undercurrent, able to knock you back when they hit the gas (see “Caelum Incendebat”) but they can bring in groove and proggy flourish to provide an experience you won’t soon forget. A tease with the small amount of content, but seriously promising.

Listening to Arrival seems to prompt the question, “Why aren’t there more instrumental black/death bands out there?” Dead on Mars can channel the same grim and bombastic vibes of full-blown acts of the same style and ilk, but in focusing on an instrumental approach, they really give things the space they need to flourish. There’s an eerie, yet not over the top vibe employed here that is so engrossing that you’d forget that it even lacked vocals. While it can feel playful at times (“Truthseeker”), there’s no shying away from more heavy and blasting moments either. Despite playing in a somewhat crowded niche, Arrival feels quite fresh and inspiring.

A slurry of death metal influences from the straight ahead to the tech-infused, it’s the blackened side of things that gives Decrescent some wiggle room. The frantic, often balls-to-the-wall approach can be paralleled to many in the modern death metal realm at the moment, but it’s still done with quite a bit of catchiness and style. Blackened influences show up frequently in each track, bringing in some melodies that don’t often walk hand-in-hand with the tech-y death metal, which is pleasantly fresh. Ultimately, the ripping tone that tends to be the norm on these tracks is what brings it all together, never dulling the senses due to the variety outside of it, but still keeping a consistent push that’s easy to engage.

Yeah, you read that right with the style line – Estuarine play some chaotic and frantic technical death metal, but it’s also got a psychedelic side to match. It will come off as a bit unorthodox to some (particularly at the beginning) but there’s a distinctive charm to the band’s creativity and execution. Lots of crazy progressions and wild swings, with the longer songs being particularly prone to exploration in the best possible way. Consider all of this madness is accomplished by one person and you’ve got an album that is begging to be enjoyed by the death metal legions. With the right push behind it, Sic Erat Scriptum could be huge.

Hitting the marks for symphonic black metal with some slight gothic influences blended in, Infallible create an atmosphere that’s catchy while maintaining heaviness. The keys add a sense of dark cinematic flair without becoming too predominant, and also allow the band to swing in a more melodic direction without eschewing their base sound (such as “The Grand Grimoire”). While it doesn’t deviate too far off from the norm, there’s no escaping how well done it is, particularly for a two-person act. It takes a lot to get that ‘big symphonic sound’ that many strive for in the genre, and Infallible really nail it.

Those looking for some massive grooves this month are highly encouraged to look into Inverted Earth’s Vection. The modern death metal act incorporates a progressive feel to their sound, complete with one very standout feature in groove. Each track finds at least one real winner of a riff that is meant to induce headbanging. Much akin to bands like Gojira or Revocation in this regard, the cliché of being crushingly heavy actually works here. The grooves are monsters while being catchy, and the band’s progressive work outside of said area is key in setting some sort of balance. An occasional uptick in speed solidifies Inverted Earth as a band to look out for.

If the name Killing Capacity brings you back to a Dismember feeling, you aren’t completely wrong to indulge that notion. This German act brings a primal and groovy feel to their death metal in a way that’s both timeless and somewhat retro. Thankfully not entirely Swedish, but owing much to the straight-ahead bulldozing approach that many bands did execute around that time. For a debut, it feels quite punchy and crisp – just the right tone required for the bludgeoning material, but still able to bring you back for more with melodic grooves given their needed clarity. For every hypnotic groove (see “Trauma”), the band seems one step closer to fulfilling their destiny next time around.

It’s really tough to pinpoint Novaria, and that’s a good thing. Each of the four tracks contain a different flavor to them, from the Katatonia-esque “Into Nothingness” to more frantic and explosive moments within a doomy “This Cold” and proggy, Anathema-like gloom with “Chrononausea.” There’s female and male vocals (both harsh and clean) that vary from track to track, and while the ‘post’ direction always seems to accompany the band in some sense, they do a great job of not sticking to the norm. The question of how they will move forward is exciting, as all of the tracks here provide an excellent and emotive yet heavy base to build upon.

Bound to get some big initial publicity due to Killswitch Engage frontman Jesse Leach at the helm, The Weapon succeeds due to its embrace of old school hardcore and punk ethos. It’s raw and energetic – a clear focus on feeling, and that feeling is frequently anger. “At What Cost” is frenetic in its approach, and many will no doubt be stoked to hear Leach just pouring all the anger into his shouts. Buzzing guitars and pounding drums round out the feel, which is straight for the throat. “Shotgun Anarchy” is a pinch more melodic and leans more punk than hardcore, but still brings plenty of rage along with it. An act to keep your eye on if you have yearned for something more feral from Leach. 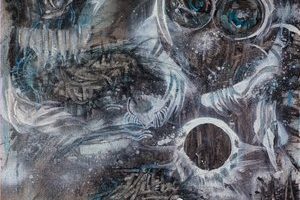