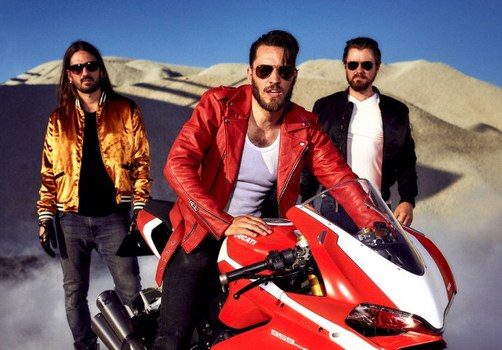 While some bands choose the route of identifying an exact sound and more or less sticking to it for a lifetime, some bands continue to tweak and occasionally overhaul their sound over time. In the case of Norway’s Shining, it has been much more of the latter, with the introduction of their ‘blackjazz’ sound back around 2010, and now once again here in 2018 with the release of Animal, which sees the prominent saxophone once more vanish from the band’s repertoire. The metallic/industrial vibe is still present, and it has now been given full authority to push the band in a more modern and even catchier direction. Some synthwave inspirations also help to push the band into a near party vibe, and end up creating a stellar mix of intriguing yet fun musical adventures. We shot off some questions to mastermind Jørgen Munkeby to discuss the changes that led to this album (and the importance of continued change).

Dead Rhetoric: You released two new songs last year, did that help you gauge some feedback on the band’s new direction?

Jørgen Munkeby: Actually we recorded the two songs, “My Church” and “Everything Dies,” but only released one of them. But yes, we did that so that we could get a feeling of how the new direction worked, and possibly tweak the direction if we felt we wanted to. And what it did was it confirmed to me that I would rather change too much than to change too little. It also confirmed that I wanted a bit more synth on the album. Also, the first release of “Everything Dies” had a more retro classic production and mix, which we thought we wanted for the album. But after we had written all the songs and recorded them, we discovered that we had changed our mind on the mix direction, and wanted a more modern and commercial sounding mix.

Dead Rhetoric: How do you feel the fan reaction has been now that the album is out there?

Munkeby: I think it’s been exactly as I thought. Lots of people who have respected the band but never really listened to the music now suddenly actually listens to our new music. Most of our long-time fans are excited about the change and think it’s a fresh turn. And a few old-school fans think some of our older albums are better, but that has actually always been the case, even when we released Blackjazz back in 2010, so that was no surprise either.

Dead Rhetoric: What sparked the change in direction from the ‘Blackjazz’ sound?

Munkeby: I was just a bit bored of making the same music, and needed a change and new challenges. I thrive on learning new things, and I think that partly fuels these changes. And after three studio albums and one live album and DVD, the Blackjazz universe had been thoroughly mapped out, and all four corners had been explored, so there was really no need to make another Blackjazz album. After all, the ones we have already made will always be there, and we’ll probably play many songs from all these Blackjazz-style albums on our live shows until we die.

Dead Rhetoric: Was it a tough decision to eliminate the saxophone completely for Animal?

Munkeby: Not really. I just decided to not care whether the resulting music could be called “Blackjazz” or not, and instead just write exactly what I wanted to write. I decided that if a song called out for a sax part, then I’d put it in, but if not then I wouldn’t cram in a sax solo just to cater to our Blackjazz brand. It was actually quite freeing and refreshing, although I still love to play sax, and am looking forward to playing the sax on our upcoming tour!

Dead Rhetoric: Will the saxophone live on with guest contributions that you continue to do outside of Shining?

Munkeby: I really hope so! I absolutely love to play sax with other artists! It lets me collaborate and learn from both well established artists like Marty Friedman and Devin Townsend, while also being able to help out smaller up-and-coming artists. And it gives me challenges, which I love.

Dead Rhetoric: What do you feel that Kane Churko added to the final mix?

Munkeby: Kane really put his mark on the mixes! He added a commercial shine to all the tracks, and made them become what they were meant to become. He also came in with a fresh critical ear when everyone else in the project had lost a bit of perspective after working on the album for two and a half year. Kane’s mixes are absolutely awesome, and helped this change become a bold and fresh musical statement.

Dead Rhetoric: Shining has always been a band to evolve – how important is this aspect when it comes to keeping your creativity fully charged?

Munkeby: I think it’s essential for me to evolve and change. Maybe not all the time, because I also need time to delve into certain aspects and skills for quite some time to really learn it. But then there always comes a time when I feel I need to move on to new challenges and evolve. And when I look back, these transition periods are always the most exciting times in my musical career. It’s risky and dangerous and exciting, and usually extends our musical relevancy for another period!

Dead Rhetoric: How do you feel that you have grown through the years alongside Shining?

Munkeby: The band has been going on from 1999, and I’ve been the only one constant member and main leader all the time. To be honest I think the band has been a vehicle for my personal growth all along, both musically and personally in life, and the Animal album is no exception. The only exception would be that on Animal I’ve closely collaborated with several people much more than before, and most notably writing music with our new bass player Ole Vistnes.

Dead Rhetoric: What do you recall about doing the live video on Trolltunga for “Last Day?”

Munkeby: It was such an exciting thing to do, so I recall every second of it vividly in my mind! There’s nothing that compares to playing a show while constantly being in danger of dying instantly! It was actually a full 35 minutes show we played up there, so it’s a pity I haven’t had time to release more tracks from the show. But now that Animal is done, I might have time to finalize the other tracks!

Dead Rhetoric: What are some goals that you’d still like to see Shining achieve?

Munkeby: Oh, there are lots of goals that we’d like to achieve. But first we need to play awesome shows and live versions of these new songs, and spread the music to everyone who can be our fans! Then we’ll take it from there!

Dead Rhetoric: What’s your view on the connection between jazz and heavy metal?

Munkeby: Both jazz and metal are wide genres, and some parts of these genres goes well together, while other parts does not mesh well. Specifically free jazz and black metal works surprisingly well together! I think it’s because both genres share the focus on atmosphere over technique, both focus on spirituality, and both are aggressive and angry forms of music. A match made in heaven and hell!

Dead Rhetoric: What plans do you have now that the album has been released?

Munkeby: Oh, right now all I focus on is the upcoming tour! There’s a lot that needs to be done, and I’m both excited and a bit scared at the same time! Then I’m sure I’ll have lots of plans as soon as the tour is done!