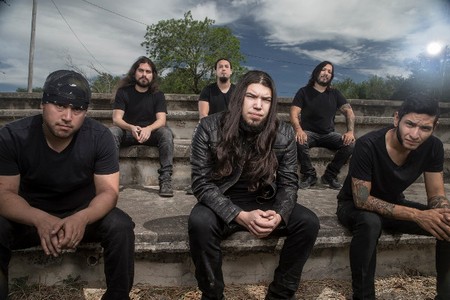 Shattered Sun came out strong and gave it all they had back in 2015. After putting in the legwork in the years prior, the band got noticed by Breaking Bands LLC (the powerhouse team of Chuck Billy, Jon Zazula, and Maria Ferrero) and put out their debut album, Hope within Hatred, on Victory Records. They toured with Testament and Exodus at that point, and that led into what was to be the final run of the Mayhem Festival (which included Slayer and King Diamond). The band had ‘made it’ so to speak.

But, as vocalist Marcos Leal will attest to below, ‘making it’ doesn’t mean that that it’s all downhill from there. It’s a constant battle to stay relevant, keep fans engaged, and continue to move forward. The band spent quite a bit of time on the road, but the cost was nearly the band itself. We chatted with Leal about the band’s near implosion, the road to album number two, some lessons they’ve learned along the way, and how they’ve forged an even stronger Shattered Sun.

Dead Rhetoric: Based on a press release, it sounds like the band almost imploded between releases. What happened?

Marcos Leal: We were thrown right into the fire from the first date out. We were going with Testament and playing in front of 1000+ crowds every night. We were just learning how to be a band. [And] It’s not just a band – we’ve grown up with each other. Families fight – we fought over little things. It took our guitar player Daniel [Trejo] leaving the band [to see what was happening to the band]. He was gone for about two tours, and we didn’t speak that whole time. We were able to mend things as friends first before we did anything with the business and anything with the band. We fixed our friendship first. Daniel started this band. We all have been friends since we were teenagers. It was once Mark Lewis came into the picture…he said he was into it and wanted to do it. We said, “Let’s put all this bullshit behind us and let’s make the best fucking record we can make!”

Dead Rhetoric: So how much of an impact did Mark Lewis have on the end product of The Evolution of Anger?

Leal: I think Mark understood what was going on when he came into the process. We let him know that we were a band that was a little fractured; we were mending our wounds. We weren’t all the way together like we once were. He was the one who helped us and said, “Hey, look – you have some great songs here but they aren’t meeting potential because you guys aren’t connecting on a person to person basis. You have 15 songs and you have 12 songs…we need to put it all together.” Through work, and “hurry up and get this done” kind of made us see that this is how it really is. We needed to get past this stuff and follow this guy’s guidance. He was showing us the way. He had a huge impact on this band, not only musically, but helping us mend the wounds that there were between us.

Dead Rhetoric: Did any of that kind of follow through with the writing for the songs that hit the album?

Leal: It was like a theme from day one. We wrote 26 songs for this album. As we were going through this album with Mark, he just kept saying, “Man, this is really pissed off. I can feel there is a vibe to it.” Once I started showing him the lyrics and starting singing them the way I wanted to sing them, he was like, “I can definitely feel the anger and feel that there’s something brewing here. We haven’t quite put our finger on it, but I’m going to amplify it by a million.” Literally, in every move we made, that was a theme of the album. “This isn’t pissed off enough. We need to let the anger out. We need to get pissed. This is what the anger makes me feel; this is what the music makes me feel.” We had never worked with anyone like that. It was awesome. To really channel it, it was kind of like therapy.

Dead Rhetoric: So I’m taking it that is where the album title [The Evolution of Anger] came from?

Leal: Exactly. We were thinking about it and just in the lyrics…some of the lyrics stem from what was going on between us and Daniel. “Burn it Down” is all about that. But I was also looking into politics and religion, and having to deal with my issues with death; having to bury friends and family members, literally while we were recording this record. The first record, there was a lot about hope and seeing the hope in tomorrow. At that point in my life, I was just very angry with a lot of things and I wanted people to know there is an ugly side to this world and I have seen it. I wanted to reflect on that.

Dead Rhetoric: Did some of the tension in the band stem from you hitting all of these big, high-profile tours and being out nonstop?

Leal: Yeah, I think so. Daniel had just had a newborn, and I think a lot of people have this misconception that once you make it, you are set. Actually, the fight is just beginning. You have to fight your ass off! If it means jumping on every single tour nonstop and not going home for 2 months, that’s what we were going to do. Sometimes, maybe it was against our better judgement and maybe we overexerted ourselves, but we were always about the team. I think that, mixed in with this being a business now – we aren’t playing shows for pizza and beer anymore [laughs]. There’s a business with your merchandise, there’s money with your travel, and the people you hire. You aren’t playing in these little small clubs where it doesn’t matter who comes to see you. Now everything is real…that definitely caused a lot of pressure.

I think the cool thing about it is that we didn’t cave. We might have almost kicked each other’s asses, we might have screamed and cussed every word at each other, but we never caved. We never broke. We almost did, but we saw past that shit, and that’s what I’m most proud of about this record. We could have broken [up], but we didn’t. We just pulled it together. It’s a testament to who we are.

Dead Rhetoric: So it’s one of those things where you are better off and stronger from it…

Leal: Oh yeah, definitely. I think once Mark showed us the potential of the songs and showed us that we were ten times the caliber of players that we thought we were. Actually getting you to produce that and see it, it was eye-opening. It made all those little fights about tours and money and all the bullshit…it made it nonexistent. Like, “It was pointless, what we were fighting about because look at what we are creating right here. That’s what it’s all about.”

Dead Rhetoric: In a different way, was there pressure in making sure that you came out of the gates with something that was going to be a step-up from the debut?

Leal: Definitely – I remember the pressure started, maybe the first tour we were on. Our first tour was with Testament and Exodus and they blew us away every single night. Then you follow up that tour with Slayer and King Diamond, it’s like, “Jesus! We have a lot of climbing and learning to do.” But the great thing about it – touring with all those bands, they never treated us like the outcasts or the scrubs. Every band that we have been with, I can think of times where they took us under their wing and basically said, “Look, this is how you do it. This is how you be a pro.” That’s something I’m very grateful for.

Dead Rhetoric: With all those experiences – high-caliber, big name acts…was there something that you took away from it?

Leal: Work. Anybody out there who thinks it’s a party and its sex, drugs, and rock ‘n roll – those days are over. There’s nothing but hardworking, blue collar people that do this. I’m talking from the performers to the crew that gets you there. The ones that went to bed at 6AM and they are up at 8AM setting up the stage and running shit. It taught me that throughout the levels, from Metallica to local bands and local guys loading in the show…it’s work from the top to the bottom. And I’m happy to work! I’m happy to be a part of it. I’m happy to be living the dream. This is what I wanted to do with my life, and is what we wanted to do with our lives. I’m just thankful for the opportunity.

Dead Rhetoric: Could you go into the artwork and the link to being lost in anger?

Leal: It’s cool, because we were working with our manager Chuck [Billy] pretty in depth about what we wanted for the cover, and who we wanted to go with. Marcelo Vasco was one of our top guys – he’s done Slayer, Hatebreed, Machine Head, Testament…you name it, he’s done it. Once we saw some of his stuff, we just identified with it. What I wanted to do, this time around, because for the first record, I was involved with every little aspect of the art, from the color to everything – I wanted to say, “Hey, this is what I’m thinking and this is what the record is about…I want you to run this. Take it where it should go.”

Literally, three days later, he [Vasco] said, “I listened to the album, I read your lyrics. This is what I came back with. The labyrinth maze is supposed to be your mind. If you notice at the bottom, the guy is entering upside-down. You are going to go in, and you might be in disarray but you are going to define yourself by your actions. Are you going to make it through this maze or are you going to get lost in it?” I think that’s what is going on around us every day, in politics, in what this world is becoming. Everybody has an opinion, everybody seems to have an answer, but at the end of the day, no one wants to do anything about it. You define yourself by your actions…that’s what this record’s about, that’s what this band is about.

Dead Rhetoric: I was searching around, and I couldn’t actually find it, but I was looking at comments for the “Burn it Down” video and there are a lot of people talking about an ad within YouTube bringing them to the video. Was there a YouTube ad for the video itself?

Leal: Yeah, Victory has been a very amazing and supportive label for us. They believed in this record to the fullest. They put some ad space into our video. I think it was the lighter fluid to start the barbecue pit. It really got everybody’s attention, and people know we are coming. We haven’t come out yet, but we are coming. That’s just a statement to everybody.

Dead Rhetoric: It seems like it’s working; there was a ton of people that found out about the band. That marketing scheme seemed to work really well.

Leal: It did wonders for us. It opened up a lot of new doors and fans for us. I think that’s the cool thing. If everyone out there is going to advertise for tampons, cigarettes, e-juice, you name it…let’s advertise our music a little. Let’s open some new fans’ ears! I think it was awesome. I’m very thankful that Victory got behind this the way we wanted them to.