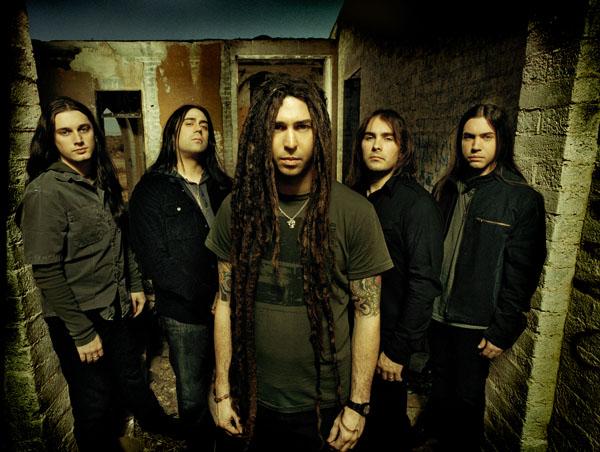 At least they didn’t call it Resurrection. Sure, Retribution is fitting, but Shadows Fall doesn’t need to play that game. Still very much a viable entity on the American front, the Boston quintet returns on their own label [Everdark Industries] and a new, bristling record in the form of Retribution. It’s the album that probably could have followed watershed War Within, but foresight is a tricky thing. That’s why deals with major labels are struck.

Retribution is classic Shads Fall, boasting one of the year’s best songs, “King of Nothing,” a stellar lead single (“Still I Rise”) and that hooky, engaged assault that vaulted the band to unforeseen heights in the mid-00’s. It bristles like War Within, only with a more mature, saddled front, one that speaks of band now entering into veteran status.

Blistering caught up with vocalist Brian Fair to discuss the decade that was, the new album, their stint on a major label and what lies ahead. Fair, fighting Boston traffic while on the phone couldn’t have been more accommodating…

Blistering.com: I saw you back in 2000 on the Dismember/Krisiun/Kataklsym tour and now here were are nine years later.

Brian Fair: It’s crazy to look back. It’s gone by so quickly, but at the same time, things have changed so dramatically, it’s insane. At that time, US metal…it didn’t have a name. It was completely off the radar, but it was fun, such a tight-knit, but small scene. You can see how things have gone off, but it was nothing we ever saw happening – Grammy nominations and world tours weren’t on the agenda back then [laughs].

Blistering.com: Right and you joined Shadows Fall right after Overcast split, so was there any inkling it would go this far?

Fair: Not really. I knew that just from knowing the guys in the band and the talent level in the band, plus there was more melody than what was in Overcast that maybe there was a chance to expand a little bit beyond our boundaries. But getting out of Massachusetts and playing some shows on the weekend, getting our record out there…that was the goal. But we achieved each individual goal so quickly that it took off.

Blistering.com: What did you take away from those early support slots?

Fair: Dude, you learn so much on those tours. Doing these DIY tours, in the van, grass-roots style. We put our own first record, booked our first tour and you learn so much the hard way. It makes everything fall into place and you have an appreciation for every accomplishment and every little thing you get and it seems so better than what you were getting before, which was nothing [laughs].

Blistering.com: As for Retribution, it sounds like you’re ripping it out more, being heavier. Does that tie into not having any real pressure from anyone?

Fair: I think it’s where we’re at musically. The last record, we pushed the envelope on melodic moments and a grandiose production. With this one, we worked a lot in the practice space, working as a band, so it was a raw vibe, right from the beginning. There’s some still big hooks on the song, but it’s definitely more of an aggressive, up-tempo record. I know Matt [Bachand, guitars] was listening to a lot of his old death metal cassettes, dusted off the old Dismember record, so I know that was an influence on these songs. I never know what Jon [Donais, lead guitars] is listening to, but it always involves shredding.

Fair: Right and if I get in one mood where I’m just screaming, it starts to ruin the impact of those intense moments. If it’s a big, wide-open rock chorus, you gotta come up with a hook that’s worthy of the riff. I love melodic metal bands like Maiden and Judas Priest and even Testament where you can sing along to that stuff. At the same time, if you’re going to drop the heavy death metal riff, you gotta scream over that. You can’t bring the falsetto out for the grindcore part [laughs].

Blistering.com: You mentioned not having any pressure this time out, so for Threads of Life was there any direct/indirect pressure from [then-label] Atlantic?

Fair: I don’t know if there was pressure, but we wanted to see where we could take our sound at that point. Musically, they had no influence. They didn’t put any pressure on us. We didn’t play the record for them until it was mastered and at that point, it was too late for them to have input [laughs]. Also, I think they knew they were signing a metal band. We weren’t going to be banging out pop songs. But we really wanted to try some new things. Each record, we wanted it to stand as a testament to where we were at that moment. At that time, we had just come off the road with Iron Maiden where we did a tour with them all summer, so I know in my headspace, I was thinking a lot more about melody and tight sound structures.

Blistering.com: With Atlantic, was there an expectation that they would introduce you to a new audience?

Fair: Maybe. We knew that we had more chance to get in some commercial radio play. I don’t think we would try to take any crazy left turns. We’ve always had the ballad-y moments going all the way back to Somber Eyes to the Sky, which had acoustic moments and Art of Balance had those as well, although “Another Hero Lost” was without a doubt the most straightforward rock song we’ve ever written. A lot of that had to do with the subject matter and it seems counterproductive to what the song was about to make it brutal and force it in. With this album, there’s some melodic moments, but nothing that is as stripped-down and ballad-ish as that.

Blistering.com: You’ve been this for so long. How important is it to have total control over everything?

Fair: It’s pretty important to us. We’ve been lucky to experiment with every facet of the industry: we’ve self-released an album, we were on a great independent label with Century Media, then we did the major label thing, so we’ve learned how we’ve wanted to do things. We’ve formed our dream-team with Warner Music, Ferret, our publicity company with Adrenaline PR, so we’ve built a team of like-minded people, so that’s huge. Being as micro-management [focused] as we are, it was the best decision. It is a lot more work, lot more emails, conference calls, but 10 years into our career, if you’re not willing to put the extra work in, then what are you doing this for?

Blistering.com: You haven’t done a great deal of these, but Randy from Lamb of God has a guest spot on the album. How did that come about?

Fair: It’s our first guest appearance and our first curse-word all in one song [laughs]. We can finally get that sticker we’ve always wanted [laughs]. It worked out pretty funny – we were recording vocals in Virginia, about 20 minutes from Richmond, so I called Randy to see if he was home and he said he was Jakarta. He was in the middle of a bizarre, actually. He said he’ll be home Wednesday and he’ll cook us dinner Thursday. So he initially came down to cook us dinner and I was looking at him and said, “there is no way you’re leaving without going work,” so we put him behind a mic and what better line for Randy than, “Quit your fucking crying!” It’s funny…we’ve joined each on stage a million times. He’s used the lyrics to “Destroyer of Senses” in one of their songs and we’ve sung those songs together, so it was cool to finally hear our voices together.

Blistering.com: Both you and Lamb of God and several other bands came up through the US metal in the early part of the decade and one of your big breaks was Ozzfest ’03. What do you remember from that experience?

Fair: That was definitely a turning point from being a band that people have heard about, to a band that people know about. It got us front of so many people that may have caught the name somewhere, but didn’t hear us. It was a huge opportunity for us, Killswitch and Chimaira. I think 80% of the bands on that stage broke up at the end of the summer and a lot of them were major label bands that had been bought-on, where us, Killswitch and Chimaira were the only indie bands who played on Ozzfest. It felt like the new guard was coming in.