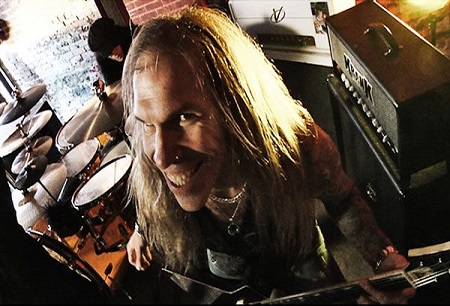 Dead Rhetoric: You’ll be participating in the Metal Masters tour across North America in the early fall with Vicious Rumors – what can the fans expect in terms of a set list, and how do you think Anthony will handle the back catalog in terms of singing?

Frost: It’s going to be an amazing tour, I have known Geoff Thorpe for a million years. It’s crazy; the metal scene is like a very small family. I think the tour is going to be really great for the fans – what can they expect set-wise. We will do minimally a song from every record for sure, probably two-three off the new record. I think people will have to understand that Anthony is going to approach the old stuff differently. It will have more of a gravelly [tone] to it – he can hit the high notes too, we just didn’t do it on this record because I wanted things to be different. It’s almost like seeing Paul Rodgers singing Queen – who is Freddie Mercury, you don’t just sound like him, he is an entity by himself. Paul came in and gave Queen a soulful feel, and that’s similar to what Anthony is going to do.

Dead Rhetoric: Who are some of the guitar players you grew up emulating or using as a base for your guitar development, and which guitarists from the current generation impress you these days?

Frost: One of my favorite guitarists of all time is Kerry Livgren from Kansas, I’m a huge John Sykes fan, Gary Moore, and one of the guitar players that is very influential that not a lot of people expect is Neal Schon from Journey. The Hardline record, his playing is ridiculous. Tony Iommi and Ritchie Blackmore need to be named as well. From the current generation, I hate to say new because he’s around my age but Doug Aldrich, I think he is a great player and he should have been a lot bigger 20 years ago with Lion, Bad Moon Rising, and Burning Rain. Another surprise to most readers but I think he is a phenomenal guitar player- Keith Urban, and Richie Kotzen, all three players are great in the current music scene. Richie is one of the sweetest guys you would ever want to me – I can’t wait to see him live with The Winery Dogs, he plays without a pick. I’m 45 years old and still a fan of musicians – I enjoy people. I’m a big fan of Gary Moore too, John and Gary go hand in hand, and don’t forget Michael Schenker! Never forget him…

Dead Rhetoric: Where do you see the metal scene in 2013- and what aspects do you think musicians and fans need to work on to keep the movement vital and thriving in these digitally driven times?

Frost: Record sales suck , we all know that. Metal is coming back, I went to the Mayhem Festival the other day and it was great, everyone was getting along, different types of bands were playing together. Since MTV doesn’t play videos anymore, we have VH1 Classic and thank God for That Metal Show with Eddie Trunk. The problem is if you aren’t Taylor Swift or that kind of pop/AOR you aren’t going to be on the radio. Fans need to keep up and buy your artists records to help them tour. If you want to see them you have to support- I still buy records. My musician friends offer to send me the records – I would rather buy them because every dime counts. We are family and we are all trying to help each other out.

If you go into a store, you want to buy it now- and if what you are looking for isn’t there, you will buy something else and it kills it. We have Vintage Vinyl near where I live, and they have everything, but if you are in the midwest those stores aren’t going to have Seven Witches, and once one copy is sold, they won’t reorder. Don’t you want to look at the liner notes and look at the record? I want to see the cover, who used what gear- I think it’s getting better than it was in the states five years ago. You get better package tours, I just hope people don’t close their minds to metal and rock ‘n roll. There’s nothing like seeing a band in a live environment, bands like Black Country Communion, Winery Dogs, you want to hear heavy guitars and someone singing their balls off.

Dead Rhetoric: Do you still have a good relationship with the former members in Seven Witches? Also, how would you describe your personal philosophy when it comes to life and your personality to people- has your perspective about the world changed as you grow older?

Frost: My friendships with all the others members, I get along with them all. Bobby, Alan, James- I talked to James a month ago. I can say this… I don’t rule out anything with people I’ve worked with in the future. I would welcome James coming on stage if he was in the area to sing a song with us. Philosophy of life: I am very fortunate with where I am and what I’ve seen. I got to play in Savatage, one of my favorite bands growing up- and I got to play the material that Criss Oliva helped write. I am the luckiest SOB known to man. You have to look at life and be really happy. I am going to keep doing what I’m doing, and I will never be the guy that doesn’t come out and talk to my fans. My fans are my friends and that’s the way it is- they are spending money to come out to a show, and if they don’t like the new singer, I will still be their friend. Be proud and be happy with where I am at this moment.

Dead Rhetoric: When younger musicians hit you up for advice about music and/or the business side of things- what type(s) of advice do you give them? Are there distinct mistakes or areas you see people making missteps that cause years of pain and suffering?

Frost: First thing I tell people is that before you sign a contract, make sure you get a lawyer to look at it. Number two – when you are getting a record deal, try to get as much as you can upfront. You need money to make a record and sales aren’t what they used to be. Don’t go out and buy ProTools and say you are going to make a record in your bedroom without really knowing how to do it. The most important thing I tell them is when you write a song, make sure you go back to it 20,000 times and make it the best. Take your time, don’t do everything half ass; think about it as the only song you are going to have on a desert beach, can you live with it? Never give up on your dreams.

Dead Rhetoric: One of the quotes I love that you gave in a recent interview is ‘Rock ‘n roll is an escape from everyday life’ – do you feel like people need music in their lives now more than ever given these crazy times we live in today?

Frost: Music has been an escape from the 40’s to the 50’s to the 60’s to today. People in cars are singing, slapping their hands on the steering wheel to the music – when you are having a bad day, music is a stress relief. I am a total health freak, I go to the gym seven days a week, and when I am working out, I listen to music; it relaxes me. It’s the air that I breathe, can you imagine a world without music, seriously? Movies always have music in the back, I think we need it more now than we ever did. We had a really bad storm up here with Hurricane Sandy, we got destroyed. You think about the shootings in Connecticut, the world is really dark lately and I really think music is your escape. If it gives you five minutes of happiness, enjoy that happiness.

Dead Rhetoric: You have a teenage daughter- does she show any aspirations to become involved in the music industry or performing arts?

Frost: My daughter is turning 19 this coming Thursday, and I think she is going to become a tattoo artist. She really loves it, she has tattoos… how could I say no because I am sleeved, my son is 8 and he is totally into sports, but he also wants to play drums, so we will see.

Dead Rhetoric: If you had the chance to assemble the ultimate metal band from a pool of musicians alive or deceased, who would you pull together for a lineup?

Frost: You are killing me, I love it! On vocals Ray Gillen, hands down… on bass, that’s a toss-up between Bob Daisley and Neil Murray, I will say Neil Murray. On drums, I am going to say Cozy Powell which is pretty much the classic Whitesnake lineup. Both of them were also in Sabbath… and now you are going to ask me for a guitar player, huh? I’m going to put Richie Kotzen, could you imagine that lineup, with Richie also able to sing harmonies with Ray? That would be a power four that would make history right there and then.

Dead Rhetoric: Finally, how do you see the rest of 2013 for Seven Witches and your own activities?

Frost: What’s going on is I see Seven Witches touring a lot this year – we have the right lineup that want to do it. We are doing a full month in North America, which is pretty big for us. We are going out in a van driving out from venue to venue, slugging it out. I don’t want to hear from musicians that they can’t do it if we are doing it. We are going to Europe in November. I just finished this record with a 17 year-old girl, and it’s a very Alanis Morissette record, and I played on David Reece’s solo record, wrote three songs with him. I am about halfway done my next solo record too. 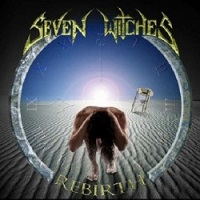