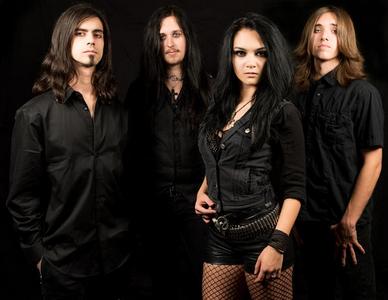 Dead Rhetoric: How did it come about that you would get to join Amaranthe on-stage for “Drop Dead Cynical” in Stafford Springs, CT when you opened for the band? What other live highlights have you had that stay in the memory banks, be it local bills or opening for nationals?

Cowan: I met Olof Mörck the guitarist of Amaranthe a couple of years ago at a ProgPower festival. I told him that at my old music school in the UK, we had worked on their song “Hunger”, and that I was working on a cover of “Drop Dead Cynical”. I guess he thought that was pretty cool, because maybe two weeks before we opened for them, he messaged me asking if I wanted to sing with them onstage. Of course, I said yes! Elize, the lady vocalist, shared my Kamelot cover on Facebook as well – it has something like 30,000 views now. They are a really hard working band.

Other magical live moments: our first big bill was opening for Arch Enemy back in 2014. I don’t remember much from the actual set aside from the fact that it was the first time everyone has cheered when we walked out, and there was this tangible feeling in the air that this was right, this is exactly what I need to continue with. When we opened for Sonata Arctica, we were so incredibly well-received by their fans that, to our great surprise, we ended up taking a bow at the end of our set. It seems a little silly, but it’s the kind of thing you usually only see national acts being able to do without looking pompous. The feeling of acceptance as a melody-wielding band in death/thrash New England was unforgettable, and was another moment where I really felt that something was right.

On that note – the New England metal scene is really flourishing these days. It has become a lot more positive and supportive of everyone, there are other melodic bands, new extreme bands, veteran bands and musicians that recently started doing super great (happy to say our friends are included in this group!), people actually going out to shows… There’s a new life here, and every local show we’ve played has been immensely enjoyable.

Dead Rhetoric: How are you able to manage your time given your work as a vocal coach, plus the activities you have with FirstBourne, Light & Shade, and the Queen Boudica Project – as you currently live in Texas but often conduct most of your work in New England?

Cowan: Time management is a skill I worked for many years to earn. The secret is my Moleskin week-at-a-glance notebook, and tons of air miles! Plus, the internet allows for remote songwriting, recording, and teaching. I write down every single thing that I have to do. On the opposite page will be my notes for the week, what I have to work on for each project. As far as working for the three bands, it’s the most useful thing ever to carve out time for it all.

Dead Rhetoric: You recently got the chance to be a touring keyboardist/backing vocalist for part of the Winds of Plague North American tour run in the winter of 2017. How did this come about, and what takeaways did you have from this experience? Is this something you’ll consider doing in the future if opportunities/time allows?

Cowan: The Winds of Plague tour! The drummer, Art, found me on Instagram via #MetalKeyboardist. Their old keyboardist was off doing pop music related stuff. I was at NAMM when I got the call actually. This was in late January and the tour started in a few weeks in February. At the time, I was the only one who used that hashtag, so all he found there were tons of videos of me stumbling through Fleshgod Apocalypse tunes and writing Spires songs… I guess it’s what they always say: Just make content and put it out there!! And as gross, self-absorbed, and millennial-y as it feels to use hashtags properly, just do it.

Any takeaways… always pay attention when you are setting up on stage, because you always seem to look like you are part of the crew. It doesn’t spoil your outfit – when we opened for Evergrey as Seven Spires a couple of months ago, even though I was wearing the crazy boots and my fishnets, I had my Seven Spires shirt on and people were like ‘oh cool, they even have a roadie’. John was really amazingly cool and supportive about Seven Spires. People would come to the merch table and he would tell them who I was and where I came from. It depend help expand the Spires fanbase doing this.

I’ll absolutely go out with them again as my schedule allows. It was so much fun! Seven Spires is my number one priority and always will be, but if the time and schedule allow it, I would do this again.

Dead Rhetoric: Tell us about the importance of family support with your music career – it seems like to me your parents are very supportive of your work, is this true and what have they instilled in you that you apply to your ethics and beliefs?

Cowan: The support of my family is one of the biggest factors in my progress so far – probably the biggest, outside of the hours that I have put in on my own. They are incredibly supportive in all aspects, and I’m always be thankful to have them.

My father is probably the hardest working person I know. He is a business consultant, and regularly works 18-hour days as well as traveling the world. Right now, I think he is in South Africa, and he was in Amsterdam last week! He has been this way for as long as I can remember, and I always wanted to be as hardworking and successful as him when I grew up. My mother told me when I was six years old that it was cool to not be like everyone else, and that she thought it was awesome that I didn’t care about trends. That will forever stay with me. I hope it’s still cool to not be like everyone else, because I am still weird and nerdy as shit!

The other thing is that they always wanted to live overseas, and so they made it happen. My father received a new job offer, so from Feb 2007 – July 2013 I lived in the UK and Netherlands. It was a life-shaping experience I wouldn’t trade for anything. From them I learned you really can fulfill your dreams, you just have to work hard and be ready to take the opportunity when it presents itself.

Dead Rhetoric: What would surprise people to learn about Adrienne the person, beyond your musical activities?

Cowan: That’s hard, because I’m pretty open about who I am, but something you might not know about me is that I was an award-winning pianist and ceramicist as a child. When I was nine or ten years old I made a clay dragon in art class, and my teacher was impressed, so she submitted it to this nation-wide ceramics contest, and I received an award for this. When I was 10 or 11 my piano teacher pushed me super hard for a contest at my level, and I won that as well. And, I took ballet lessons. I am a huge nerd, I like Lord of the Rings and sci-fi as a genre.

Dead Rhetoric: Given your love of coffee, would you ever considering developing a Seven Spires brand of coffee, and if so what types of flavors would you offer?

Cowan: Seven Spires coffee absolutely has to be in our future – something bold, dark, and with 20% extra caffeine. Espresso, of course! I’m also a big caramel fan, so it would be cool to have something with a caramel syrup in it. Jack is a big white chocolate, mocha guy. I have him hooked on espresso too- he makes a mean latte. He has a state of the art espresso machine, with the part where you have to stamp down the beans- it’s so good. He frosts the milk perfectly, if you ever have a chance for him to make you one, you should.

Dead Rhetoric: Have you developed long-range goals for Seven Spires or any of your other bands, and if so what steps need to happen to make these goals closer to reality?

Cowan: I am probably the queen of goal lists and to-do lists, (laughs). My nerdy/aggressively Type A hobby is visualizing huge goals and then finding long term, middle term, and short ways to manifest them. For example, wouldn’t it be grand for Spires to be the biggest metal band out there, or to be the band that marks a turning point in metal, or to be ‘the band that got me into x’, to bridge the gap between old school and new school metal fans, between melodic and extreme metal fans, to record every album with a real symphony and play shows with said symphony, etc… I won’t bore you with my ‘how to’s’ this time, but believe me when I say I am ALWAYS charting and re-charting thoroughly detailed courses to where we want to be.

As for my other bands, I am not the captain there, so I just write songs, play shows, and follow as I am advised. I’m totally happy this way too because it means someone else is in charge, and I can just enjoy the ride!

Dead Rhetoric: Where do you see the state of symphonic metal these days? What bands are impressing you the most, either on record or on stage?

Cowan: Ah, the state of symphonic metal. I honestly live under a rock and don’t listen to too many bands, and when I do, it’s mostly a lot of Insomnium, Ghost Brigade, etc. and then film/game scores and lately tons of Chopin. So, metal, and symphonic music, but not combined, (laughs)!

But, Fleshgod Apocalypse always have impressed me with their musicianship and orchestral arrangements (big nerd moment, I had an orchestration lesson with Francesco Ferrini and it was one of the highlights of that year) and I really love what Carach Angren have been up to lately. There’s another storytelling band that doesn’t care what’s cool or not to do. A black metal band with high quality videos including dancers, and orchestral arrangements by a guy who also scores horror films! I think that is so cool.

Probably I should say something about the not-extreme bands in the genre or the bands with fellow lady singers, but I’m not sure there has been a lot from that corner of our world that has really grabbed me recently. It takes me a good year before I like anything new though, I am a bit stuck in my ways sometimes (laughs)!

Dead Rhetoric: What’s next for the band following the release of the record, will there be any touring and how soon do you plan on getting down to recording the follow up?

Cowan: There will be some touring, yes! Actually, there were a couple of offers and potential stuff that fell through, but the fun stuff we have planned with our friends in another New England band will be announced soon. After that, it’s a matter of looking for the right one to hop on, I think.

As for the next record, we’ll have a pre-production meeting with Sascha about the songs, and I guess get to work on it as soon as possible!