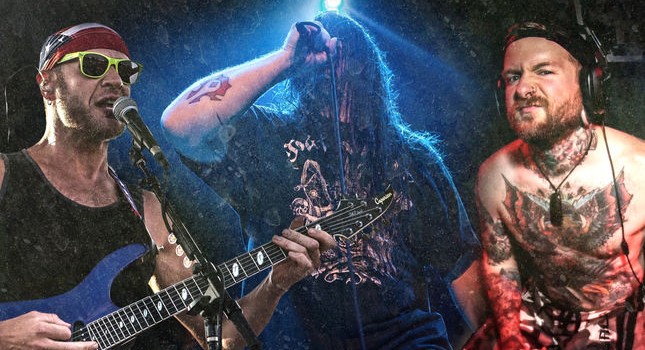 In the metal realm, we try our best to make everything a “supergroup.” For some reason, it seems to make the idea of an album just a little more impressive. But the term has been so overused that it’s begun to lose some of it’s meaning. But on the other hand, how do you discuss a band that features Adam Dutkiewicz (Killswitch Engage), George “Corpsegrinder” Fisher (Cannibal Corpse), and Shannon Lucas (ex-All that Remains, ex-The Black Dahlia Murder) in it’s ranks without it? A bonefide supergroup if there ever was one.

Joining forces all the way back in 2009, it’s taken plenty of time for everything to come together to make the supergroup release happen. Now we are less than two months away from the self-titled release, and the band has released their first song, “The Vengeance in Me.” Guitarist Adam Dutkiewicz was kind enough to chat with us about the project’s inception, expectations, and what the busy man has lined up for the rest of the year.

Dead Rhetoric: What started the notion of getting together the rest of the band that became Serpentine Dominion?

Adam Dutkiewicz: It all stemmed from the Mayhem tour in 2009. All three of our bands [Cannibal Corpse, Killswitch Engage, and The Black Dahlia Murder] were doing that tour together. Every day we had signings at the same time that Cannibal started their set. I remember thinking, “my god that dude sounds like a monster…live too.” He’s incredible. One night we were all hanging out drinking in the parking lot, and I approached George and said, “hey man, if I wrote a record for you, would you sing on it.” And he said yes! Right there, the wheels started turning. Of course, I knew Shannon from when he was in All that Remains – I made a record with him. He just sounded like a monster every day with Black Dahlia. So I told him that George and I were making a record and I asked if he wanted to play drums on it. And away we went!

Dead Rhetoric: So it’s been 7 years since the ball got rolling – was it just a matter of trying to coordinate schedules between the three of you?

Dutkiewicz: Exactly. It was that and hitting a few speed bumps with the lyric writing for the record. George initially wanted to try to do the lyrics himself. But he’s never really been a lyricist – the other guys in Cannibal always wrote all the lyrics. Once we got the lyrics sorted, we got going on again as well. But yeah, scheduling was mostly the issue. With Killswitch and Cannibal touring all the time, and wanting some family time here and there it was really rough trying to find a place and time when we could actually get some vocals done.

Dead Rhetoric: You mentioned the lyrics – you brought in Jesse Leach. What prompted you to use him?

Dutkiewicz: George didn’t really come up with any ideas that felt solid. So I asked him if he [George] would be cool with an outside writer, and he said it might make more sense to do that. The first guy I thought of was Jesse, because I have made a bunch of records with him. I really respect him as a lyricist – he is really creative and is good on the spot. He really writes from the heart. So I thought it could work out cool. He ended up submitting a bunch of free-form lyrics and poetry and stuff. From that, I just took the lines that I felt had the most impact and made the point we wanted to make.

Dead Rhetoric: Did the lengthy time from when the project was announced lead to heightened expectations that people have about the band?

Dutkiewicz: I don’t know to be honest. I kind of stay away from the whole Internet/band talk kind of thing. I guess maybe it could have, but I don’t even remember when it was announced…when the rumors started flying around. It was just a thing we were doing for fun. When we would get to it, we would get to it. It wasn’t a high priority on our schedules, because it was a side project and we were busy with other things. So you never know I guess.

Dead Rhetoric: Was it nice to be able to write something outside of the usual realm of Killswitch Engage?

Dutkiewicz: That’s why I wanted to do it. I love listening to aggressive music, and it was a really cool album for me and a lot of fun. It was so cool to make music with two guys that I respect so highly. George is just a monster, and Shannon is incredible! To be able to collaborate with those two guys was cool as hell for me.

Dead Rhetoric: Do you think getting “The Vengeance in Me” out there well in advance helped to clear the air for those who weren’t sure what you were going to sound like?

Dutkiewicz: I’m sure it did, just because it took so long. I’m assuming people were starting to think, since it took so long, that it wasn’t going to happen. So it’s kind of a good thing that something got out there so that people know that it’s real and all that. It’s funny though, I don’t have any expectations of it – it’s something we did for fun. Hopefully people receive it well, which is of course what you want, but at the same time – we just did it to have a good time and make something different. It was a lot of fun.

Dead Rhetoric: You were just saying you don’t pay too much attention to the goings-on with the Internet, but have you heard much from people who have heard the track and how they felt about it?

Dutkiewicz: Not too much. Some people that I have talked to said they really like it – personal friends and people telling me that there have been good comments on it. You never really know until the record actually comes out, so we’ll see.

Dead Rhetoric: Based on “The Vengeance in Me” and branching out from that – what can people expect going into Serpentine Dominion’s debut?

Dutkiewicz: It’s not all fast. There’s some slower grooves. There’s lots of blastbeats and groovy drums too. There’s more melody in some of the other songs….lots of guitar work. I actually did some clean vocals here and there; I know a lot of the metal purists are going to hate the clean vocals. But like I said, it’s something we did to do something together and make something different.

Dead Rhetoric: So you can expect a good variety as you go through the whole album…

Dutkiewicz: Yeah, it’s going to sound exactly like if you put Cannibal Corpse together with Killswitch Engage and Black Dahlia.

Dead Rhetoric: Do you think this is the type of album that could push some fans of Killswitch into a more death metal mindset?

Dutkiewicz: Maybe; it might turn some people off but some people might really like the aggressive nature of the record compared to the standard metalcore that is out there nowadays. It’s definitely pushing the envelope a little more.

Dead Rhetoric: Is this meant to be just a one-off passion project or do you see life for the band beyond the album?

Dutkiewicz: Initially, yeah…we will have to see how it’s received. It all depends on what the people think of it. If it becomes a thing where a lot of people are really enjoying it, I’m not opposed to writing more material – it’s a lot of fun to write music with those two guys.

Dead Rhetoric: So is the potential there then, depending on how it’s received and coordinating your schedules, that you could do something live…like a festival or something?

Dutkiewicz: You never know what the future holds. If, for some reason, we can figure out how to all get together and do shows and people want to see it…I’m not opposed to the idea at all.

Dead Rhetoric: So the three of you are all very big names – what made Metal Blade the right choice for this album?

Dutkiewicz: I’ve been friends with a lot of people at Metal Blade for quite some time. That’s the label that Cannibal is on, of course, so it was kind of a no-brainer. They are family so it all made sense.

Dead Rhetoric: With KsE, Serpentine Dominion, Times of Grace, and producer duties, how much does time management come into play on a daily basis?

Dutkiewicz: It all depends on what I want to put on my plate. I definitely take some time for myself. That’s one thing I’ve realized; the older I get, I need to do instead of make and make…work, work, work. It all depends on what I want to do in a situation. I’ve mostly been working on my own music for the time being. I think I’ve been hit by a creative spurt or something. I just did the Killswitch record, finished up the Serpentine Dominion record, and now I’m working on another Times of Grace record and writing material for that. I guess working at a relaxed pace is really cool right now.

Dead Rhetoric: Cool to hear about the Times of Grace…do you have any more plans other than just the writing phase right now.

Dutkiewicz: I’m currently writing and have about 6 songs done. Of course, it’s massively different than what Serpentine Dominion is doing and from what Killswitch Engage is doing. It’s a little darker and moodier [than the first album].

Dead Rhetoric: What are the best and worst aspects about being so involved in what you do – meaning the writing/recording/producing pieces?

Dutkiewicz: For the Serpentine Dominion record – it was having all of that time to work on the record. The more time you have, the more you beat it up. I feel like I drove myself nuts working on this record, from a sonic standpoint – a lot of the guitar tone stuff. You always think things could be better and you end up making things worse because you have all this time to play around with it. In a perfect world, I don’t think that a producer/engineer should work on a record for more than a month or two. That’s when the drive is timed-out right. You don’t overthink things; you go with your gut instincts. Seven years is a little too long in my opinion.

Dead Rhetoric: So if you make a second record you’ll try to get it out there a little quicker then…

Dutkiewicz: I’m going to try for seven weeks instead of seven years [laughs]. I think that’d be a much more sane approach.

Dead Rhetoric: What lies ahead for the rest of the year, be it Serpentine Dominion, Killswitch, or whatever you have going on?

Dutkiewicz: The Serpentine record comes out in October; Killswitch is out on tour right now and we’ll be home in late September. We have some international stuff going on with Killswitch and we’ll be out for the rest of the year. Next year we have some more international stuff and if possible one more US tour to support the record, in January I believe. Lots of flying and traveling all over the place! 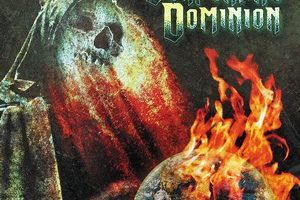