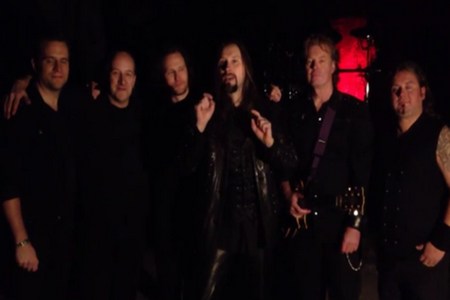 Dead Rhetoric: Do you wish you could have some form of sign language or a tele-prompter to interpret your thoughts into words to save your voice?

Breed: (laughs) That would be good. One time when I thought I was worried I was talking a little bit too much I brought out a pad and started writing. The reason why I shouldn’t talk much on tour is of course everywhere you go on tour where you want to talk to your fans it’s going to be in a loud environment. It’s basically like talking in a concert or a really loud pub and you wear your voice out because you are being too loud. So my number one advice to myself is to shut up and go to sleep (laughs).

Dead Rhetoric: What songs do you think are benchmark/career highlights that you’ve sung on? If I had to pick a few, I would say “A Mended Rhyme”, “Another Time Around”, and “Anubis” would be three of my favorites in the Tad Morose catalog, as well as “Nosferatu” from the debut Bloodbound record…

Breed: Interesting. I would probably pick “Anubis” as a song that has resonated with many others as well as myself. “Servant of the Bones”, another Tad Morose song. “I Am Alive” on the Project Arcadia album. This is tough… there is a lot of stuff, but those are really good choices I think. From the Serious Black album, maybe “As Daylight Breaks”, the title track.

Dead Rhetoric: You’ve not only been a premiere vocalist for so many bands through the years (Tad Morose, Bloodbound, Trail of Murder), but also as much a fan of power and progressive metal music, including personal appearances at ProgPower USA multiple times. Why does this festival resonate so well for you – and thousands of others – for so long?

Breed: It’s a really good set up for it. It’s about the right size, you don’t have tens of thousands, you have about 1,000-1,200 people there. It’s perfect because you have the actual venue with the stage and all that but you also have the meeting places where you meet with people and talk about things, not just music. The whole setting, the social meeting is really what it is. You find the music draws them in, you find people with like-minded opinions and people of different opinions that you still like. You connect, that’s what it really is. It didn’t hurt that I live kind of close by, so that made it easier to go there.

Dead Rhetoric: Are there any misconceptions that people have about Urban Breed that you would love to set the record straight on?

Breed: No, no no. People have misconceptions and I find that amusing. I don’t want to set them straight (laughs). The more outrageous ideas they have about me the more fun I have. I told somebody in an interview about this before- there are some rumors about me going around. The most outrageous one is that I was ex-communicated from a Swedish church for running naked into a sermon yelling profanities, I just wondered who comes up with that stuff, that is hilarious (laughs). You start wondering if they were trying to hurt me by saying that, they have no idea how miserably they failed.

Dead Rhetoric: Bruce Dickinson, Geoff Tate, and the late Midnight of Crimson Glory fame are three of your initial metal singers that you really aspired to become delivery-wise or power-wise through your style. Who impresses you most these days in the melodic, power, or progressive metal genres as far as singers, and what do younger singers need to focus on in the future?

Breed: I can start on the last bit, because that’s easier. Focus on finding your own identity. Focus on finding ways to emote. Find a way through your voice to communicate what you feel inside. It’s hard to do, because first you need to build up your technique and you have ideas in your head of what you need to sound like- and you need to get rid of those ideas. What does your voice sound like, and what can you do to make sure whatever you are feeling inside with that voice comes out every time? If you think about it, it takes a little time to come to that point, but it isn’t very hard – because when you are communicating with people you are communicating with your voice. It’s not just the words you are saying- it’s how you are saying it. If you take that into account you will figure it out- that’s my main advice. Go for that part first, the earlier you can get there the better it will go for you.

As far as singers now, I am not sure. That’s really tough. I will say the last person to really touch me vocally is Sarah Teets from MindMaze. That was a fantastic performance; I heard the song “Dreamwalker” from the latest album Back from the Edge – beautiful, I got goose bumps. That’s what I’m really talking about (in the advice answer). Where you can communicate something, it doesn’t mean she sounds like she’s ten feet tall and super powerful, but it also doesn’t mean she’s super tiny and fragile, it means she’s got it right because she got me to feel what she is singing.

Dead Rhetoric: You’re involved in quite a few projects these days. Do any take priority?

Breed: First of all, it’s very few projects actually at this point. The funniest thing is that Project Arcadia has project in the name, (but) it’s not really a project. They were thinking about dropping that, but we just figured we would muddy up the waters a little bit. As far as priority, I don’t have much time for anything outside of Serious Black, but don’t worry I will squeeze some time in for Project Arcadia and maybe some time for Trail of Murder, we shall see.

Dead Rhetoric: To that point, you’ve been in quite a few bands since you left Tad Morose. Are you looking for something more stable and permanent?

Breed: I do think it could be good for me to actually sort of plan what I’m doing right now. If nothing else for continuity sake, you start confusing people when you start doing one thing and then move on quickly to the next. Of course, if you are doing new things all the time with new people, you are constantly in that first stage of discovery, which is not necessarily the best thing in terms of creating a masterpiece. Then again, sometimes that can be the trick.

Breed: I wouldn’t say I get a lot. I get a few, it’s not like my phone is ringing off the hook.

Dead Rhetoric: It’s been over ten years since the release of Modus Vivendi. How do you feel about the album these days?

Breed: I still think it’s a good album, absolutely. I do hope I get to pick a song or two in the current bands I’m playing in now – and in particular Serious Black – from that catalog. I know in Project Arcadia we are going to do some Tad Morose songs. Somewhere down the line when we make sure that people understand that we have our own identity, we can also bring up stuff from our common or various back catalogs. We’ll see what happens.

Dead Rhetoric: Have you paid attention to what Tad Morose is up to these days?

Breed: I haven’t really paid attention but I do know what they’ve done, because I run into them every once in a while. I get updates and I heard the new album, and it’s been conceived as a pretty good follow up. That’s good for them, and I hope that (new vocalist) Ronny (Hemlin) gets the praise that he deserves for the hard work that he puts in, he’s a super nice guy and I like him a lot.

Dead Rhetoric: Were there any specific reasons why when it came to Bloodbound that you left for the second record, came back for Tabula Rasa, and then left again?

Breed: I didn’t leave the last time, I was fired (laughs). Let’s put that straight, I know the reasons behind this and that’s fine.

Dead Rhetoric: How is 2015 shaping up for Urban Breed in regard to touring, recording, and other activities?

Breed: It’s going to be a very busy year which is perfect, as that’s the way I like it. We are on the Hammerfall tour, and we will do some touring with Project Arcadia as well. I will do some recordings in March, and then fly back to Europe in the summer for the festival season.