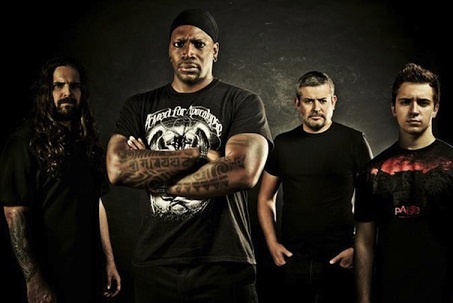 So dogged by reunion/Max talk is Sepultura that even its main constituent, guitarist/songwriter Andreas Kisser, can’t help but bring up the Soulfly figurehead. DR was determined to go the entire chat without a single mention of Cavalera, but alas, it was Kisser that made first mention of Max when talking about the lost ground that is North America for the band. It has to be tiresome fodder for the Seps; they’ve been engaged in such discussions for over 15 years now and it’s come to overshadow some pretty good albums, specifically their last three: 2009’s A-Lex, 2011’s Kairos, and their new The Mediator Between Head and Hands Must Be the Heart.

As if trying to get their albums shuttled to the masses was hard enough, their proposed fall North American tour with Kataklysm and Unearth in support was cancelled a mere weeks before its launch due to visa issues. Thus, any sort of momentum the Seps had hoped to pick up with Mediator (which is receiving some high marks, us included) was negated, leaving the focus for the time being on their home country of Brazil, where they are hailed as heroes. Never the one to be undaunted, Kisser phoned to DR to talk about all of the above and how in the constant face of pressure and ill-will, Sepultura will continue to move forward, rendering the past as just that: the past…

Dead Rhetoric: To start, how disappointing was it to have your North American tour postponed?

Andreas Kisser: Oh yeah man, it sucks big time. We were very excited to start the tour in the States and Canada, but the working visas took longer than we expected. We have all of our visas, no problem, but for touring, we need these specific visas. For some reason, the documents and everything didn’t arrive at the right time. In May 2014, we should be able to come over.

Dead Rhetoric: It has to be problematic since you’ve been over here many times before, including work on the new album.

Kisser: It happened before the 90’s. The ones in the 90’s when we were ready to go on tour, but we had to cancel three or four shows at the beginning of the tour and then we managed do the tour. But this time we could do the tour was very tight and everything was crucial to happen and for us and to miss two or three shows wasn’t going to work so we had to postpone.

Dead Rhetoric: Do you feel like you’re trying to make up some ground here in North America?

Kisser: Oh yeah, definitely. The States are always a hard place. In the Chaos AD days, and the Roots days especially once we didn’t have a chance to do a proper U.S. tour because Max left. But we did the Pantera tour, we opened for Ozzy, we did the Ministry tou, but we never did a proper great, headline tour. We always did great tours and great packages, but never really a Sepultura tour. We were about to do that on Roots, but unfortunately Max left and everything. Since then we’ve been working our asses off to try to make up for it.

The scene changed, and metal wasn’t popular as it was in the 90’s. There were lots of factors that pushed us away from the States, but now I think we have a great chance to make up for that. We have a good label, a great album and of course, this tour we were ready to go, we were very excited, but the visas didn’t let us do it this time. We are excited to do an American tour now with this album. We’ve been receiving lots of really great and positive reviews and feedback from the States, and it makes us really excited about it.

Dead Rhetoric: I read something from you and correct me if I’m wrong, but the Mediator sold out in within hours of its release in Brazil.

Kisser: It’s not hours – it was more like in a day. It was really a lot of expectations and it was great to see this reaction, it’s awesome. We have this respect from the scene in general… people don’t even know what kind of music we play, they know about Sepultura, about what we managed to achieve, that we’re still here, touring. It feels great to have this support from your home country. We live here in Brazil, we do all of our stuff here, our families live here, so it feels great to be at home.

Dead Rhetoric: As for the Mediator, I think and this is such a cliché to say, but this is your heaviest album of the Derrick Green era.

Kisser: I think so. The chemistry we have this time…there are a few elements, like we have a new drummer Eloy [Casagrande], and he’s amazing on the drums, 22 years-old. I’ve never seen a drummer like that before. He’s very metal, he loves Sepultura, he knows our music very well. To write this album with him was fantastic. He brought a lot of possibilities to our music. And working with [producer] Ross Robinson, he knows Sepultura so well and he so much respect for us, so it was great to work with him. He’s very much an organic producer, a producer of the moment, the present, of the performance. I love the way he works. It was supposed to be the way it is, of this way of trying to sound more extreme with the lyrics, more dark and evil. That was our intention as a metal band. Darker and evil. [laughs] I think we achieved that with Ross with those elements. It sounds great…sounds almost “alive.” It sounds like Sepultura on stage, which is something we always try to achieve. Ross was perfect for that, for letting our demons flow and doing the best we could.

Dead Rhetoric: Working with Ross today versus working with him way back in 1995. What’s the difference?

Kisser: It’s the same Ross for sure, the crazy guy who is willing to do anything and respects art in its purest form as a human expression. Of course, he has the experience of working with so many different bands, including The Cure, he did an amazing job with them. But this time, we were much more relaxed. We didn’t have the drama of the Roots days, like the management, Max, all the crap that broke up Sepultura, or that lineup. This time we were so relaxed. Everyone was enjoying each other, and really together, enjoying life. There was no drama, everybody was really relaxed and focused on the album. It makes a whole world of difference. I think that’s the main difference of it all. All the rest is the same concept and chemistry of relating to music, which is very fresh. It’s very fresh…it’s the present, the sense of now.