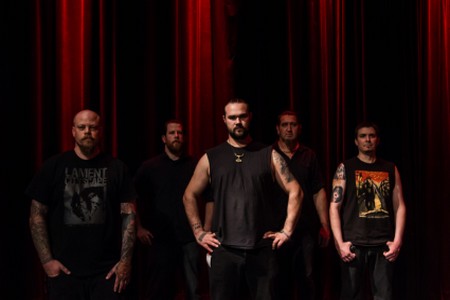 Bartholomew: There is a pathway there. I think that the scene on the cover is one of those transitions. We just wanted to go for pen and ink for the most part. There is a bunch of other artwork in the album that Nate Burns from Ohio did. He’s done a lot of our t-shirts and the cover of our split with Godhunter. There is a piece of artwork for each song. Inside the booklet, there’s lyrics on one side and then a picture of what represents the song. There is intention there with the artwork and it’s all hand drawn stuff. It just felt like the right thing to do for this album.

Dead Rhetoric: I saw where the door is open [on the cover], and there’s a little star there.

Bartholomew: A lot of people have some speculation as to what that means/represents. I think the little star is representative. It’s supposed to be leaning against the wall and the door is cracked open. It’s black – it’s like the universe. Behind that door…I don’t know if you’ve see some of our promo pics but that same exact star is in some of our promo pics. We try to do things like that, and leave little hints and clues. People can think about those things if they really want to.

Dead Rhetoric: So how did the deal with Metal Blade come about?

Bartholomew: We got hit up by Prosthetic first, and from there we were talking to Century Media too. We played Doom in June in Las Vegas and the guy that puts it on is Marco Barbieri, who is the president of Century Media. From there, he came and watched us in LA. Century Media was interested and we were sending them demos. At the same time, the guy who recorded the album sent it to Monte Conner from Roadrunner and he loved it. So there was a buzz going on, but ultimately it was Dave and Liz from Earsplit. I was talking with Dave and had told him what was going on. He asked if he could show it to his friends at Metal Blade and we did that. They [the labels] were all great, but we had to make a gut instinct. We chose Metal Blade, because the A&R person there, Kelly, was just rad. She felt the most forthcoming, honest, and personable. She felt like someone we could talk to everyday and we do. We talk all the time. It wasn’t so business-like, it felt more natural. So far so good – we’ve been happy.

Dead Rhetoric: Your sound is pleasantly your own, which is hard to do nowadays. How would you yourself describe Secrets of the Sky? You can’t really use one of the usual labels to fully describe what you guys do.

Bartholomew: We’ve always let label people and PR people do that for us. I don’t think we classify ourselves. I think that we have pieces of all the things that people compare us to. On this album, people have been saying Anathema and My Dying Bride – those aren’t huge influences on us to be honest. I like them, but I think that maybe we are all into a little bit of different stuff. When we come together as a band, we are able to make it work in a way that is a bit different.

Dead Rhetoric: Garett, you were put into the addition of the Decibel Top Extreme Metal Vocalists piece. How did it feel to be included in that as part of such a young band?

Garett Gazay: It was weird, I didn’t expect it at all. It was cool, and super flattering. There’s a lot of other really cool singers in there too and such an honor to be associated with them. Any of the successes we’ve been having, we are just like “whoa.” People really like what we are doing and it’s super flattering because we don’t think much of what we are doing. It’s just what we do.

Dead Rhetoric: Lyrically I know you base it around a concept. With the sequential progress of how you record, does it make it easier to make it say, “This is the path we are going to go?” No pun intended by the way.

Gazay: [Laughs] Not really. It’s kinda weird, but the concepts come to me while I’m writing the lyrics. I’m not sure exactly how it happens.

Bartholomew: We had the title before we really started working on it, and it had a direction.

Gazay: Yeah, but it wasn’t like I had this full-fledged concept in mind when I was writing the lyrics. I guess it all started coming together when most of the pre-production demos were getting done. That was when we realized that ‘this is the concept.’ It became more solidified by the end of the pre-production demos. To answer the question, it’s not like we choose a concept and write to the concept. With the new record we are starting to work on now, there really isn’t a concept but the songs are starting to make that. The way that [Clayton] is writing the guitar parts, it is making my lyrics go in a certain direction. The concept starts to get born and revved up that way.

Dead Rhetoric: So you have officially started your third album now?

Gazay: Yeah, and it sounds awesome. The guitar work – it’s really great. We are building on the work that we have already done, and it’s getting more and more exciting for me because I am falling in love with these new songs and really excited about writing lyrics to them. I actually have a few song titles I think.

Bartholomew: We are already about 2-3 songs in to the next album I think. They need some touch-ups but the skeleton is there.

Gazay: The album title is hovering over our heads. We can almost feel it, but it’s not there yet. That’s kind of our creative process. You [Clayton] come up with something, or you and Chris [Anderson] came up with something for the first record, and it guides me and then these cinematic concepts start to grow and evolve, and then the lyrics happen. It’s a weird process.

Dead Rhetoric: What do you have going on for the rest of the more immediate future?

Gazay: Nothing totally confirmed yet. There’s some cool stuff that we are being talked to about.

Bartholomew: Well, in the immediate future, we are finishing up this tour. We’ve got like 7 more shows. We are in New Jersey tomorrow and then we route home through the south. We are home for about 10 days and then we go out for a few more weeks with a band called North. If you haven’t heard North, they just signed with Prosthetic and are a really amazing post-metal band. I can’t wait for that tour, it’s going to be fun. So two weeks with them and then I don’t know. More touring. It’s just not ready to be talked about yet. We are hoping to keep touring and when we have time, we’ll write. [Pathway] just came out on Tuesday so to talk about the next record now is like…ehh.

Gazay: We shouldn’t even be talking about that. But that’s how the process works. We start early. Some bands get so busy, and they tour, tour, and tour. Then they have two months off and are told to make a record. It’s like “oh fuck!”

Bartholomew: They get the sophomore slump, or just a shitty album because they aren’t inspired.

Bartholomew: Thank you for that. But yeah, we just plan to tour. Anything that comes our way and we are into it…