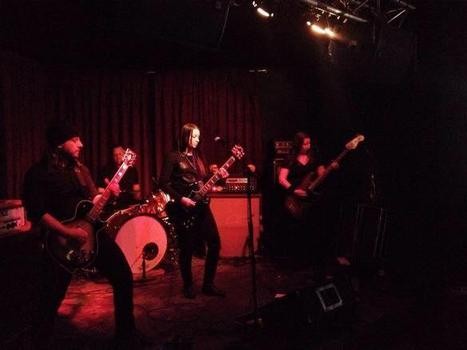 Doom metal and stoner rock seem to go hand in hand with the New England scene. There’s something about the blue-collar ethics and four distinct seasons that produce brilliant bands through the years, as names like Grief, WarHorse, and Pilgrim have made various inroads through their discography and live reputations. Former Warhorse guitarist/ vocalist Krista Van Guilder started Worcester-based Second Grave in 2012, a quartet that quickly gained numerous kudos for their solid tempos and attention to doom riff details. Rounding out the lineup with husband/guitarist Chris Drzal, bassist Maureen Murphy, and drummer Chuck Ferreira, the group would get the chance to play a renowned festival like the Stoner Hands of Doom in Virginia for 2014 as well as open for acts locally like Castle, Witch Mountain, and Gospel of the Witches in their five years together.

Just as their full-length album Blacken the Sky hit the streets in August, the band announced their break up and final performance at the third annual RPM Festival in western MA. At least going out on top, the combination of Sabbath-oriented riffing and classic rock execution, plus swinging tempos and melodic vocals keeps your attention from beginning to end – mesmerizing most who take in this material either on record or on stage. In this interview Krista lets us know why the time is now for the group to come to an end, the three-year process behind the songwriting and recording of the album, and her thoughts regarding the doom genre as a whole- as well as what the future may hold for these musicians in other projects/bands.

Dead Rhetoric: Second Grave recently announced after 5 years together, you are playing your last show at the RPM Festival at the end of August and breaking up. What circumstances led to this final decision, and do you feel proud and satisfied with what you’ve accomplished during that time?

Krista: Well, Chris had left the band the beginning of May after we had finished tracking the new album. We knew it was going to be difficult trying to find a replacement, and as all of the songs were written for 2 guitars, remaining a 3-piece wasn’t really working out. So it just seemed like it was the right time to end the band, going out on a high note if you will. We are all very proud of the new album, a lot of blood, sweat, and tears went into it. And I feel it is some of the best writing of my life. As for the last 5 years, we released what I think were 3 very solid records, so yeah, I can’t complain.

Dead Rhetoric: You recently issued your full-length album Blacken the Sky that has been years in the making. Tell us about the songwriting and recording process, any particular challenges, surprises, or highlights that came up – and how you feel this effort stacks up to your previous discography?

Krista: It was almost 3 years-worth of writing. Chris wrote “Death March” back in the summer of 2013 when (Dave) Gein (bassist) was still in the band, I wrote “17 Days” shortly thereafter. The rest came in dribs and drabs. “No Roam” was the last song I wrote before we went into the studio in March. In the midst of writing these tunes, Gein left the band, and it took a while to find a replacement—which ended up taking the form of Maureen. During the downtime we weren’t rehearsing as a band, and then it was working with Maureen to get her up to speed on the material, or rehearsing existing tunes for a show, so the new material was pushed to the side for quite some time. Typically, our formula was writing individually. I would write by myself, and in several cases had a complete song ready to go when I brought it to everyone else. Chris is the other main writer, but he and I would generally work on his stuff together so he’d have the main riff, but I might write the chorus, etc. It was more collaborative when he and I would write together. When Gein was in the band it was the same although he wrote “Mountains of Madness” and “Mourning Light”. Bringing it to the rest of the band, everyone would figure out their parts and we would settle on how many times something should be played or if it should be arranged slightly differently. A couple of times a riff would change in feel if Chuck played something with a little more swing as compared to straight-ahead. Very rarely a riff was written on the spot at practice.

Lyrics-wise I always write by myself. The music usually comes first, then a vocal melody, and then lyrics around the vocal melody. We have never tracked in the studio as a full band, we’d play live scratch tracks so Chuck would have something to play to. Chuck tracks extremely fast, usually 2 takes and he’s done. With the first 2 albums, Gein played live with Chuck and then just punched in for quick fixes. Chris and I would then play our parts separately, sometimes 2 tracks each which becomes time consuming to play through everything twice and then go back for solos especially when the songs are as long as ours! This last record we only each tracked one guitar each individually, which went much faster. Maureen tracked the bass for the new album separately as well. Vocals were done in a day, exhausting, but they were done by the end of the day. All in all, it was about 4 long studio days of tracking. Proud moment for me on this record was nailing the guitar in “Bloodletting” in one take. I think the new album is a culmination of us honing our sound and getting more comfortable with the music and each other and not being afraid to experiment. I feel it is the strongest of the three.

Dead Rhetoric: Stylistically you blend a great mix of doom and heavy metal influences while also not being afraid to add a little heavy rock/alternative vibe when called for – what elements do you think made for the best Second Grave songs, and where do you like to go lyrically for this material?

Krista: We all listen to so much music, our preferences are very diverse and eclectic. It just ends up working into your writing. A lot of this is just feeling as well, and sometimes you just let the riffs take you to where they want to go. Lyrically I’m all over the map. Sometimes I write about things I know—people, situations—but you can only write about that for so long. I try to be open to everything in the world around us, and that lends for some great inspiration, even if it means a tragedy had to occur for that inspiration. For instance, “Death March” is about the Mayans and their sacrificing humans to appease the gods for simple things like bringing rain if they were in a drought. It was about how they truly believed that sacrificing someone would change the weather. “17 Days” is about the woman who survived that terrible building collapse at a factory in Bangladesh in 2013. So many people died when the building collapsed, but she managed to survive for 17 days trapped in the rubble before they pulled her out alive and generally unharmed. I tried to get inside her head trying to imagine what you would be thinking during that time. So stuff in the news, stuff happening around the world, a book I’ve read, it’s all fair game for inspiration for lyrics.

Dead Rhetoric: Having a husband and wife as guitarists in the band, did that ever present any discord or would that push you harder in terms of bringing the best out in each other as players and people?

Krista: Ha, funny you should ask that! While Chris and I worked well writing material, there was definitely tension at practice on occasion. We both have strong personalities, and we both have different approaches to the same instrument, and we don’t always see eye to eye. Unfortunately, that would surface during practices for others to bear witness. It’s tough playing with your spouse no doubt, especially when they play the same instrument as you.

Dead Rhetoric: How do you feel about the New England metal and music scene as a whole – considering the numerous bands that you’ve played in through the years, are things as strong (or stronger) than when you originally started?

Krista: This scene is incredible. So many great bands, so many great people. You end up becoming one big metal family! There is definitely a stronger community than 20 years ago when I was in WarHorse. I think there are some amazing promotors out there who truly love music and do so much for the scene – Chris and the Metal Thursday crew, John and Promotorhead Entertainment, Brendan with Snake Charmer Coalition and the Eye of the Stoned Goat, JJ at the Obelisk. Great people who truly love music.

Dead Rhetoric: What are the biggest challenges you think independent or underground metal artists face and have to break through to achieve any level of respect or success? In your view, has the internet/social media platform made things easier or more difficult to break through?

Krista: Breaking through the thousands of bands that exist today. It’s hard to compete when there is so much music vying for everyone’s attention. The internet has brought the entire world to your desktop. Social media in some respects has made it a little easier, but as I said earlier, every other band is using the same platforms so it can be overwhelming. Slow and steady is still the best route, you just have to keep plugging away writing, playing shows, building a fan base, building a network of other musicians.

Dead Rhetoric: What does doom mean to you personally – and what have been some of your favorite bands, artists, songs, or albums that have helped shape your views on the genre?

Krista: Doom to me is about a feeling. It’s slow, and plodding, and grabs your spine and slowly shakes you alive. Personally I don’t listen to a ton of doom, I listen to a wide variety of stuff. Generic to say, but Black Sabbath were big influences, and I was a huge Crowbar fan when I was in WarHorse. I like the more melodic style of doom, My Dying Bride with its layers of melodies and sadness or Subrosa with its creepy layered vocals, or Windhand with its over-the-top heaviness but with haunting vocals. But then more upbeat stuff too. Not always doom, but I absolutely love Elder, KYOTI, InAeona and anything Karyn Crisis puts out—highlight of my music career opening for Gospel of the Witches.

Dead Rhetoric: You mention in the posts regarding your break up that the musicians of Second Grave will continue on in other musical endeavors. Can you shed some light on what we can expect, and will you be exploring different styles of music or still have elements of doom and metal going on?

Krista: Chris started a duo (drums/guitar) awhile back called Winterbolt. He’s more focused on that now, they have a show in September at Ralph’s in Worcester. He’s also jamming with some other people, so we’ll see if anything comes out of that. Chuck has always played in multiple bands so he continues to do that and I’m sure it’ll be a matter of time before he winds up in another doom band. Maureen and I are jamming with a different drummer—Brian Banfield from the Scimitar. New stuff, new name (TBA) and hopefully will be playing live in a few months as writing is going pretty quickly. Still in the doom metal genre as I tend to be the most comfortable there, but a bit different from Second Grave as it’s just one guitar. Stay tuned as more will be announced in the coming months! 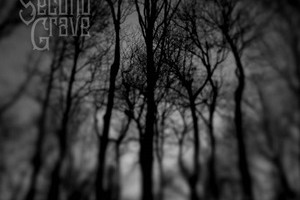