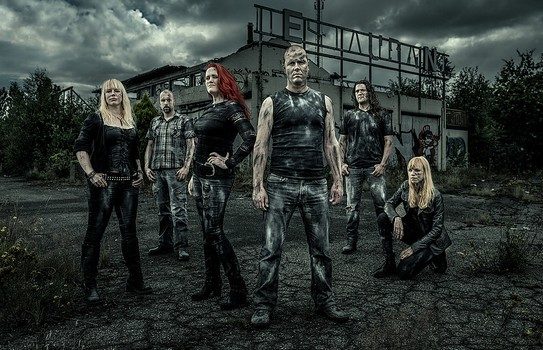 Clichéd as it may be to say, perhaps we are currently witnessing a new age of melodic death metal. Not of the super modern variety, as that’s been churning out the pipelines for years. But the olden variety, where strong melodic riffing and intricate melodies reign supreme over more modernized keyboards and predictable chorus/verse patterns. One such entity out to prove that we can still have the glorious riffing of old yet keeping track of the time that has passed since that age is Scenario II.

Their second offering, A New Dawn, takes triumphant melodic death metal riffing and holds it to the standards of 2017. They also include prominent female vocals in addition to growled ones, offering a diversity without modernizing the approach too much. A long time coming, A New Dawn is the first release since 2009’s debut, Uniforms of Death. Guitarist Mark van Doren was able to send us some updates about the band’s past, present, and future via email.

Mark van Doren: After Aura fell apart, a few of us wanted to make a fresh start as a new band, a different scenario as it were. We had already written the song Scenario II, and given the circumstances it seemed the obvious choice.

Dead Rhetoric: What do you feel makes Scenario II different from other melodic death metal bands?

van Doren: We wanted to try something new. We added female vocals and a dark vibe to the well-known Gothenburg-sound. We deliberately choose a theme before writing the music. A New Dawn is the sequel to our first album Uniforms of Death. Both obviously are concept-albums.

The creating process of the music, the lyrics, and the artwork becomes like a journey and I feel our music reflects that.

Dead Rhetoric: How has the response to A New Dawn been thus far?

van Doren: We have had some really nice reviews, some from wellknown magazines like Dead Rhetoric, thanks again! We are very happy to hear that people really like our music, and are very grateful to our fans who so eagerly shared our music videos.

Dead Rhetoric: Your first album, Uniforms of Death, was released in 2009. What was the band up to during those years between?

van Doren: We’ve toured a lot up until 2013. We actually did really well and as far as the band goes, things were looking bright. But on a personal level several band members had some stuff going on in their personal lives. Three of us became parents and Dani moved to Spain, so we needed a break for a while.

However, because of our break there was no pressure on making a deadline and we were free to write, produce and complete our team. We are now a 100% ready to conquer the world with our music.

Dead Rhetoric: Is A New Dawn representative of a fresh start for the band after all these years away?

van Doren: It’s definitely a fresh start for us. I can’t speak for the others, but I have grown up a little and so has our music. I don’t think our music has changed all that much, although A New Dawn is darker than Uniforms of Death. It’s our second album but to the band it’s a new scenario, scenario II.

Dead Rhetoric: There’s been a number of members over the years that have come and gone – do you feel Scenario II finally has a relatively stable line-up?

van Doren: Early 2015 Bas and I started writing, just for the fun of it. We weren’t really serious at the time, but soon things went so well that we decided to reach high. We tried to find musicians who share our dream, and are able to sacrifice lots of their free time. I’m very happy with our team. They’re all really great musicians who are passionate about (their) music.

Dead Rhetoric: What made you choose to cover In Flames’ “Stand Ablaze” on the album?

van Doren: In Flames has always been a huge inspiration to me. I especially love their first albums. It felt right to pay a tribute to In Flames, but we wanted to do it in our own style; a different tuning and a little darker.

Adding a cover to the album also gave us a chance to introduce our band members by means of the playthrough we released last December.

Dead Rhetoric: Is there a song or two that you feel particularly proud of on A New Dawn?

van Doren: If I have to choose I would go for “Hysteria” and “A New Dawn” and “Rapture” and….I personally like them all haha.

Dead Rhetoric: I see “2012” on A New Dawn’s artwork, and on the last album you had a song called “MMXII.” Is there a specific tie between these two things?

van Doren: Yes, A New Dawn is the sequel to Uniforms of Death. On our first album we concentrated on the ‘end of the world predictions’ as the Mayan calendar was about to draw to an end in December 2012.

A New Dawn has an apocalyptical theme. The songs are inspired by Mayan religion as well as a self-destructing world. When the Mayan calendar ended the world as we knew her, changed. We’re no longer sure whether we will survive as a species or even deserve to do so.

Dead Rhetoric: You put Uniforms of Death on Bandcamp last year – did you find that there was any renewed interest in it after its appearance there?

van Doren: We weren’t that well represented on social media before. I looked in to all that, and found that we did attract new fans that way. Ever since we have been able to put the band back into the spotlight before the release date of our new album.

Things are going so well we might even decide to release a renewed pressing of Uniforms of Death.

Dead Rhetoric: What are your goals for Scenario II in the long-term – say, the next five years?

van Doren: At the moment we are busy arranging gigs for 2017 and 2018. We’re all in for a 100% and plan to play at as many great stages as possible. Meanwhile, we have already begun writing on some new songs and fans will not have to wait as long on a third album as on A New Dawn. 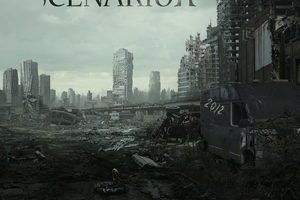