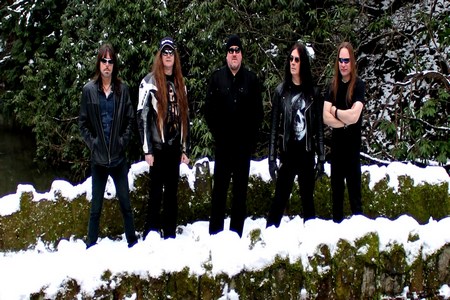 Dead Rhetoric: How would you describe the strengths and skill sets of each member of Satan?

Ramsey: It’s crazy because none of us are technically trained as musicians. Graeme (English) our bass player is classically trained for guitar lessons up to a reasonable grade. At the time we got him in the band he was Russ’ sister’s boyfriend. We found out that he could play classical guitar and we needed a bassist. He learned to play the bass, and Russ and I… Russ started first learning off of a couple of friends of his dad’s, then we started learning everything by ear. I couldn’t read a note of music when we made Court in the Act. All just by records and ears, working out what people were playing. There was no tab, we didn’t even know what tablature was. We just used our ears- although we’ve had our foibles as well, we are all individual as players. It kind of works, it’s a funny thing that when you replace one of the people in a band, it doesn’t work the same. It was easy to come back together because we had had so much experience playing together, we knew each other so well.

Dead Rhetoric: Given the fact that you guys can’t sustain a full-time career through Satan because of the ever-changing music consumption model which doesn’t compensate the musicians as much as say 20 years ago, are you selective in your live spots between small tours and festival gigs?

Ramsey: We all work full-time, but so far we haven’t turned down anything that we would like to do. We’ve managed to do all the things that we’ve wanted to do. Now with the new album coming out, the offers are starting to get much more. Next year is full already for the time we can put into it. The touring and gigging is already full and I’m still getting offers to do other things. It’s coming to that kind of crunch time- we can’t afford to just drop our jobs like we are nineteen or twenty year olds, living on beans. We have families and stuff like that. We are going to have to put our thinking hats on for next year, but we are definitely not going to be stopping. We love doing this so far.

Dead Rhetoric: What are you views on the heavy metal landscape in the current marketplace in comparison to the 1980’s and 1990’s let’s say? How do you siphon through the sheer number of releases and tours?

Ramsey: It’s a bit strange. In one way (metal) is more popular than it was, but it’s watered down as well because there is so much of it. When you are a young fan like we were in the late 70’s, you had to be very selective about what you listened to because you had to buy it. Or you could tape it off a friend if he bought it. Now you can just listen to anything you like for free. So the internet is bad for us musicians who are trying to make a living, but then on the other hand I think the resurgence of Satan is because of the internet. Young fans have gone back and had a listen to the songs and thought about why that didn’t do well. It’s a double edged sword really. I couldn’t imagine how it would be for a band starting off now, it must be really difficult. For us, it’s better the way things are because more people have access to bands- you can go straight online to get the music these days.

Dead Rhetoric: How did it feel to be in one of the pioneer folk metal acts with Skyclad? Do you think the newer generation of acts gives the band the credit it deserves?

Ramsey: Yeah, we tend to get it. We definitely hear about it from the musicians when we see them. We end up supporting all of these bands that were influenced by us, which is a bit strange. It’s great to know that we had that impact on people. I suppose as a musician in your life, that’s the most important thing- you’ve been able to influence other musicians by what you’ve created. For me it’s great- when I meet the guys from Korpiklaani they’re a great band themselves and they are doing better than Skyclad ever did at the time. They are such big fans of Skyclad, and that’s crazy.

Dead Rhetoric: Is there anything left on your bucket list to accomplish in the music scene or in your own personal life? Particular places you would like to perform or travel to?

Ramsey: I’ve been to most places. The main one for me was to go to Japan. I know for Russ it was to tour in the states. All the records that we listened to when we were younger- Unleashed in the East, Tokyo Tapes, Made in Japan from Deep Purple. I think it’s because everyone that I loved recorded there- that must be an awesome place. We’ve managed to do that, and we will probably go back to do more shows there. We’ve fulfilled them all, and now it’s about getting them better and bigger. We’ve toured South America- we’ve played one festival in Brazil, we would like to do a headline show in Brazil. We haven’t played in the capital either. Maybe Australia- I just did an interview with a guy from New Zealand and he was saying it was starting to pick up over there. So maybe that would be great.

Dead Rhetoric: Being on a heavier bill for next year’s Maryland Death Festival in Baltimore, Maryland, can that be intimidating or do you believe people appreciate diversity?

Ramsey: I think the diversity is happening because the people want it. Metal so got extreme and de-tuned, all the bands sounding the same, now playing in concert pitch- a band that actually plays like the records and doesn’t overdub anything is kind of a new thing. I think that’s what’s welcomed it, I don’t think it’s a problem at all.

Dead Rhetoric: Are you as much of a collector and fan of metal as you are in recording and performing? If so, what are some of your special treasures?

Ramsey: No I’m not, I don’t have anything like that. I have as far as rare records go, a 12 inch single of Meatloaf’s “Bat out of Hell” on red vinyl (laughs). I’m not like that with instruments either- it’s strange.

Dead Rhetoric: As a guitar and bass teacher, what types of practice and skills do you impart on your students? Do you feel that they are at an advantage today in comparison to when you were picking up your instrument skills?

Ramsey: They are at so far an advantage it’s unreal. They don’t really need teachers – they can just go on the internet and learn from there. The lessons are there. As a teacher myself it’s more about being inspirational than being a teacher. It’s also teaching them the pitfalls and the things to do rather than the things not to do because Russ and I are self-taught. You can see the hands of the guitarists online, you can learn anything about music theory, endless stuff. You can download tablature. We would have progressed so much faster as musicians if we had had the internet as kids. The main thing I teach them is to put some heart and soul, some passion into it instead of learning always to play faster or more technical. Satan material is somewhat tricky to play, but it’s also melodic and has soul and passion. I try to instill that in them, that playing as many notes as you can as fast as you can isn’t always the way to go. There are times for fast parts and time for slow parts where you put some emotion into it.

Dead Rhetoric: What was the best concert you witnessed purely as a fan?

Ramsey: Wow. Best gig… I would really have to think about that for a long time. The one that comes straight into my head is I saw the last tour of AC/DC before Bon Scott died, I saw them on the Highway to Hell tour and it was unbelievable. I’ve got the same guitar as Angus Young, he was one of my idols along with Tony Iommi- they all play Gibson SG’s. Just him going crazy, I just wanted to do that on stage. Maybe I should have been in a three chord band! (laughs) When I perform I try to think about how crazy he is on stage and I try to perform like that.

Dead Rhetoric: You mentioned that Satan has the next year already mapped out, what type of touring is going to be taking place?

Ramsey: At the moment the plans…I hope they will not change. We are going to do the West Coast of America for shows in April, down to Mexico. We’ve got a couple of weeks where we are doing some headlining shows in France, Germany, May or June. The East Coast in the states would be next October, and I think that will be quite extensive for at least a couple of weeks, more than we did the last time. Then down to South America. Last time we played one show in each city or country, we did six countries in a week. We were very successful in Columbia, so instead of one show we are going to do three or four. Hopefully we will get back to Japan as well.