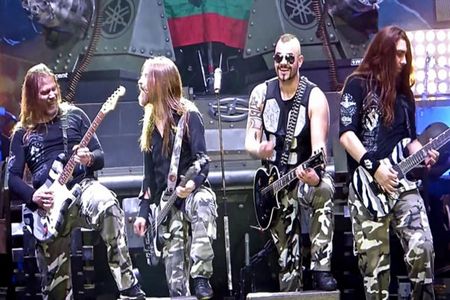 Dead Rhetoric: How do you maintain any sense of sanity and stability in terms of a personal life with family and friends considering how relentless Sabaton has been on the recording and touring front for all these years?

Brodén: It’s a matter of priorities. People always ask me what I am doing when I am not doing Sabaton, trust me there is no more time! We can’t really focus on anything else at all outside of the band, then family and friends because any type of sports or hobbies that we would start, at least for Pär the bassist and I (that) doesn’t exist- there’s not enough time. From October to December we didn’t do as many shows, but there was still me six days a week writing material for eight to ten hours a day.

Dead Rhetoric: Are you shocked by the level of passion and commitment Sabaton fans have the world around? What have been some of the craziest encounters you can recall?

Brodén: I wouldn’t say shocked but I’m really happy that we have somehow gathered the most loyal metalheads that there are (laughs). Even though album sales have dropped dramatically, in our case it’s been the opposite because the band has outgrown the decline of the record industry. That’s not up to us, that’s thanks to our fans who actually buy the iTunes product instead of pirating from Pirate Bay accounts.

99% of the fan encounters are nice- very rarely do you get something that is creepy or crazy. Crazy maybe because you are laughing, the two guys in the front row who have the same vest as you, the same pants and maybe shaved themselves in the same way as you. Looking into the mirror and they know the lyrics better than me as well. Stuff like that- people coming to signing sessions, they sometimes want a picture and another time one guy had his girlfriend with him, took her skirt up and said, ‘OK- sign her ass!’ (laughs)

Dead Rhetoric: I also enjoy the fact that you make it a point at some shows to point out the younger people in the crowd and invite them on stage to headbang with you. How do you feel about the metal scene at this point- is it in good hands with the youth?

Brodén: I am so happy to see this because I remember when I was a kid, I was way older than many of these kids when it came to seeing a metal show live for the first time. It makes me happy, I don’t think heavy metal is only for middle aged men- it can be for everyone. I want people to come to a show, have a good time and laugh- it doesn’t matter if it’s metal or pop music. I don’t want to go to a concert and not have a good time- and having very young and older people, the age span gives a better atmosphere. It’s going to be crazy, some people might crowd surf- but it’s not going to get really out of control. People think in general that metalheads are crazy ass people, but when they see that there are kids around they will take things easier to be protective.

Dead Rhetoric: How important has it been to Sabaton’s success to assemble the right team around the band as far as management, booking agents, record label, etc.? It seems like the band also takes a lot of care in the merchandising and marketing aspects for the band…

Brodén: Yes, it’s very important for us especially since we don’t have any management at all. That would mostly fall on Pär the bass player and partly me doing that stuff. We have people helping us of course with legal matters and logistics, but they aren’t hired by management- they are hired by us. So we are pretty much a self-run operation in that way. Without a good booking agent or a good record label, there isn’t much you can do. We are lucky in that sense- we are in control of pretty much everything that we do. Pär still to this day answers every piece of fan mail that we get. It’s hard- we’ve tried with managers and they’ve said they will do a good job. And maybe they can- but Pär has asked them ‘how can you care more about Sabaton than ourselves?’. We have tried forwarding fan mail to management, and then there is a fan who fails to get a response or a fan club that’s been trying to get in touch with us and they ignored it, of course because to the management there’s no money to made from that and they chose to ignore it. A fan club meeting may take a couple of e-mails and a few hours of work, we did shows in Germany and the German fan club wanted to meet with us on the last date of that tour, for example. It will take some time to set this up and make sure it’s done properly, in many of those cases when you have external people they ignored it or forgot to tell us, which is sad.

Dead Rhetoric: That’s so awesome to hear that you are willing to put that much time and effort into responding to fan mail and e-mails. I would imagine Pär’s fingers are falling off given the volume of inquiries you must receive…

Brodén: (laughs). He actually likes it- we’ve been talking about whether he needs extra people to help him respond to all the fan mail and e-mails, he says no. It’s maybe an hour or two per day- and everybody seems so happy when they get a response from the band rather than management. Nine times out of ten it’s good mail- and when it’s a bad one where we f’d up, we already know ourselves! (laughs).

Dead Rhetoric: You’ve expressed an affinity for Rainbow and Twisted Sister in the past, if you had to choose the best albums from both bands, what would they be and why?

Brodén: Oh, Twisted Sister as I’m going to have to go with Stay Hungry. That was an easy choice, it’s probably their best album together with Come Out and Play. Rainbow it’s tough, it depends on the day. It’s a dead race between Rising or Long Live Rock ‘n Roll.

Dead Rhetoric: What would surprise people to learn about Joakim these days?

Brodén: I don’t know- I don’t think there are too many things you wouldn’t expect. The one that I see that gets the biggest reaction is when I tell people that I started out in church with a Hammond organ. People see me on stage looking like the sixth member of the Village People, but I began on a church organ.

Dead Rhetoric: And what does the rest of 2016 look like for Sabaton following the recording of the new album?

Brodén: I think the plan is to get the album out in late summer, early autumn. We don’t usually take too long once we get into the studio, we are done in somewhere between five or six weeks usually. We know what we want to do when we get into the studio. The problem is always the lead time for media and stuff like that- the label of course needs to make sure everything from the packaging to sending this out to journalists, especially the bigger press who needs time to review it. We will have festivals in the summer, and I can’t promise this but I’m 90% sure that we will be hitting North America again before the year’s over and with a new album in the trunk.