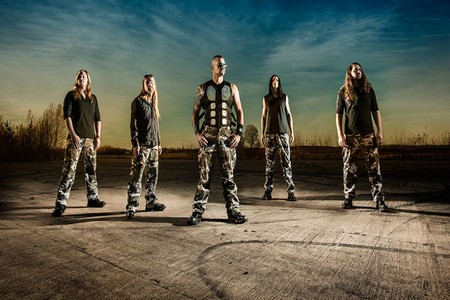 Possibly one of the biggest breakthroughs for the current power metal scene is Swedish act Sabaton. Combining a love of military battles from world history and a peppy, infectious musical style that contains hook after hook, it’s no wonder that while other artists may struggle to ascend the ranks for a sustained following, Sabaton are able to fill small arenas plus perform in front of hundreds of thousands during the lucrative summer festival season in Europe. And judging by their touring slate in support of their 2014 album Heroes, North American headlining stature is only a question of when – not if- it will occur (having witnessed the band three times in support of Iced Earth, Amon Amarth, and Nightwish).

Heroes on Tour is the latest package hitting the streets- capturing Sabaton on the live front in two separate festival appearances for Wacken 2015 plus their own open air hometown shindig. Visually offering pyro and proper stage props to accent their lyrical content, what most people enjoy about the band is their ability to engage the audience and make them feel as one – no matter how small or large the gathering may be.

Gaining the chance to speak to vocalist Joakim Brodén, his comfortable conversational skills and good natured laugh made this chat go by very quickly. Prepare to learn a lot about the touring escapades and stories through their career, the reason why the band stays self-contained as much as possible even on the management front, as well as Joakim’s favorite albums from Rainbow and Twisted Sister… plus a little new album talk.

Dead Rhetoric: Growing up did you take advantage of the Swedish government programs that support learning instruments in your youth and renting rehearsal rooms at a reasonable rate to gain seasoning at your craft?

Joakim Brodén: Yes, I would say so. Most Swedish musicians would have done that. When you are age ten you can get the chance to learn an instrument for free, and even borrow it. The government can let you borrow that guitar for the first year, and the teachers come around to the schools. As you get older and you want to start a band there are easier systems like for $5-$10 a month you can rent out 2 hours for a rehearsal room with a small P.A.

Dead Rhetoric: Now did you pick up the keyboard first or the guitar?

Brodén: I actually started on Hammond organ at church. I wasn’t very religious but I always loved the power of the instrument.

Dead Rhetoric: Heroes on Tour is the latest live audio/visual recording – comprising material from your last Sabaton Open Air festival show as well as your 2015 Wacken appearance. How amped is the band for these larger shows – and are there ever any nerves/ butterflies that enter the picture?

Brodén: Oh yes. Actually I’m not nervous about the fact that there are a lot of people there, I’m more nervous about the technical aspects of the recordings. Let’s say I can’t really take my chances when it comes to joking around on stage. There’s also the production thing, everything from the pyro to the production angles, cameras. There’s always an extra 10 or 20 things going on in your head, that destroys the feeling in my head in the moment.

Dead Rhetoric: You circled North America three times in support of the last studio album: opening for Iced Earth, Amon Amarth, and Nightwish among others. Did you know going in how much work and effort it would take to develop a core audience in North America, given the size and marketplace in comparison to say mainland Europe or the Far East?

Brodén: Yes, it’s pretty much what I expected actually. It’s a bit tougher on the media side, it seems like in the United States heavy metal is not talked about in mainstream media which makes it a little bit tougher to get attention to your band. It took us a good long time to get anywhere in Europe, so I didn’t expect to come over to the United States and fail. Sometimes it’s a little bit tougher with the venues, there is no back stages or showers sometimes- playing in Sweden or Europe that’s a given.

Dead Rhetoric: I’ve also enjoyed the way you choose to stay in the moment on stage – I was at the Clifton Park, NY show on the Amon Amarth tour where you had to extend your set due to Skeletonwich’s cancellation and the gentleman brought all the country flags to present with each song you did… where does your live attitude and confident stage presence come from?

Brodén: (laughs) I remember that one actually… Clifton Park is a part of Albany, right? I guess (my stage presence) comes from doing things over and over again many times. I never thought of myself as a front man- I began as the keyboardist in the band. Then it turned out I was writing the songs and the other guys weren’t, so they asked me to sing to see what vocal melodies I had in mind. Then all of a sudden we are recording a demo and we have no singer- they told me to sing until we find someone. Then we are doing a live show and still have no singer- so I became the front man. Five years later, they decided to hire a keyboard player (laughs). I never found myself as a singer- but I do enjoy having fun. At the same time, it’s a big blessing but it’s also a big paradox- we sing about people dying, war, military things- and we are a happy bunch on stage. We figured out that it works for us and the crowd to have fun, rather than trying to look evil or sad, you know?

Dead Rhetoric: Have things improved from your Florida ‘parking lot showers’ with a water bottle that you described in another interview on your first US tour with Accept?

Brodén: (laughs)… Well, yes and no. Things may not have improved everywhere in all of the venues over in the US. At least these days we have the budget to get a hotel room and make sure to take a shower.

Dead Rhetoric: Did you fulfill that drunken tour bet you lost where you promised to walk to the Trondheim Metal Festival – which was 342 miles from where you live? How long did it take and did you have some cool fan encounters along the way?

Brodén: I almost made it, I had to cancel about five days before the show. There was too many floods and rain so I couldn’t make it on foot, I tried to walk in that rain and I got a very angry flu. At that point I knew if I was going to keep on walking I wasn’t going to be able to make the show. I posted a video where I had to cancel the walk which was unfortunate. I had 60-80 miles left. The best part of it was meeting the fans. In the beginning it was very tough, in the end I started doing updates on Facebook and other social media outlets. People would give out boxes of food, a six pack of beer. Another time a couple came and told me they lived two miles down the road in the red house on the right. They said I could stay with them- I never had to sleep outside, there was always somebody offering somewhere to sleep or at the very least a 24-hour gas station.

Dead Rhetoric: What goals does Sabaton set for themselves at this point? Could you imagine getting your popularity to the level of arena-size audiences worldwide on a consistent basis – a la some of the biggest metal acts of the 1980’s?

Brodén: Oh… I don’t know actually. I notice if we focus on becoming better, writing better songs, doing better shows- more people and more money could come with that automatically. As long as we make sure that we do something that we think is good- and we are having fun- then I guess if we do things right it’s not impossible. In Europe we do about 5,000-6,000 people per show, which is a small arena size. Slowly but surely we are working our way there in the US, but I think it will take us about 5 or 10 more years though.

Dead Rhetoric: Has work begun at least assembling riffs and ideas for the next Sabaton studio album? Do we have an idea of what military battles and history subjects you would like to touch upon?

Brodén: When it comes to the lyrics side I really don’t want to go into that. We have an idea for a theme that we are probably going to follow, if we reveal things now and then we change our minds people get really angry at us. I’d like to avoid that- the fact of the matter is we are hitting the studio in three weeks. So we are almost done writing, the final touches of maybe one or two more songs and then we start recording. Before winter comes there should be a new Sabaton album out.

Dead Rhetoric: Are you the type of person that needs solitude to write material, or are you able to capture ideas 24/7 wherever and whenever they come up?

Brodén: It used to be one of these things that could come up at any time. Over the years I haven’t fully mastered it yet but I’m getting closer and closer to controlling my creativity. Not perfect yet, I can get up in the morning, take a run or a short workout and then sit down and let’s start. It’s going to be slow for the first couple of hours, just listen to what you’ve already done and then if something doesn’t work out, maybe turn on an episode of Band of Brothers and it gives me an emotional response of some kind, I’ll have a guitar in my lap and a keyboard in front of me and play along to a melody that comes in my head while I’m watching the television.