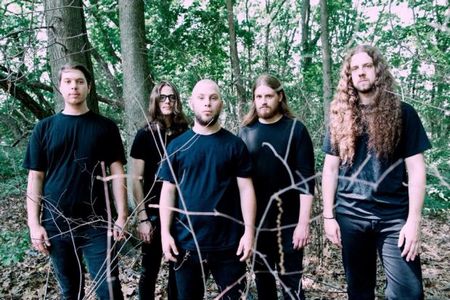 When it comes to modern death metal, far too many bands have embraced technicality as opposed to emotion. Leaving us with a cold and stale platter of flashy but flat playing. Not the case with Reading, PA’s Rivers of Nihil. They hit the ground running with their Metal Blade debut The Conscious Seed of Light back in 2013 and just recently delivered their second opus, Monarchy. Their “summer” album, following the “spring” of The Conscious Seed of Light.

Monarchy takes what worked best from the debut (crushing and memorable riffs, technical showmanship, ) and blends it with more atmosphere, something that they flirted with on the debut but didn’t fully embrace. The result is stunning. A gem that many should be singing the praises of, as it’s combination of deadly death metal riffage and lush emotions is often not found in the genre. We were able to talk with guitarist Brody Uttley (who was on his way to band practice at the time), to discuss the band’s evolution from their debut, the seasonal cycle of albums and where they are headed, and the growing Pennsylvania scene.

Dead Rhetoric: Is it safe to say you tried to push everything you did well with The Conscious Seed of Light up to the next level or two for Monarchy?

Brody Uttley: Yeah, we tried some new stuff on this record and just tried to improve the old stuff that we did and make it better. Just keep on growing.

Dead Rhetoric: With some of the new stuff, are you talking about the added atmospheric pieces that you put in?

Uttley: We introduced a lot more of the atmosphere that could be heard on like “Airless,” [from The Conscious Seed of Light] as that had a lot of that type of atmosphere going on. So we continued with that and added a lot more atmosphere with Monarchy. Then we added acoustic guitars, and we have an instrumental song, and a song with no blast beats on it. So we made some changes this time around and tried some new things. Seems that in general, people have been into it. It’s worked out, so good news!

Dead Rhetoric: You’ve had a lot of great tour opportunities between albums – do you feel that you learned any new tricks or got any new influences?

Uttley: Definitely. Right off the bat, the two bands that I can think of that, for me personally, just switched the way that I thought about live performances – touring with Revocation, those guys and Dave Davidson especially. He’s like a freak, it’s weird how tight that guy is. Touring with them and seeing how technical their music is and how tight they can perform it and still have fun – that changed the way that I see a live performance. Those guys and on the same tour, Whitechapel.

I know some more traditional death metal guys might not be into Whitechapel but touring with them and seeing the level of professionalism that they have towards their music – everything that they do is like a machine. They just have everything down so tight and their live show is such a production. Being able to see those guys and how they operate, knowing that they came from just being a smaller, signed band to becoming this huge worldwide touring band – it’s cool to see how they operate and what they do. We got some tricks and lessons from them. Revocation and Whitechapel pushed us and kicked our asses into gear.

Dead Rhetoric: You lost two members after The Conscious Seed of Light. Did that affect your approach to Monarchy at all?

Uttley: A little. Our old drummer [Ron Nelson], he left pretty early on in the touring cycle for The Conscious Seed of Light and we got our new drummer Alan [Balamut] about midway through the cycle. He meshed with us pretty well from day one. He brought a really cool, new approach to the drums. On The Conscious Seed of Light, our old drummer – he was a great drummer but he would do a lot of blast beats and a lot of double-bass and that was pretty much it. Alan, he really thinks his parts out a lot and he does a lot more creative stuff than our old guy might have done. With our other guitarist [Jon Kunz] leaving, that kind of left me to write the album. We got our new guitarist, Jon Topore, kind of late in the writing process. I ended up writing 95% of the music. The only song that Jon wrote was track three, “Reign of Dreams,” which is actually one of my favorite songs on the album. The fact that we lost those guys, it brought in some more possibilities with new members. A little bit more breathing room.

Dead Rhetoric: Likewise, you stayed close to home with the recordings…was this a way to kind of expand yourselves as well?

Uttley: I recorded the guitar and the bass at my home studio. There was a lot more time to experiment with things. We had all the time that we needed, being that we were recording at my house. There was a lot more breathing room with writing the guitar and bass parts to try different things and take our time with recording them. The last record, we had to hustle and get everything done in three weeks when we were down in Florida. I would definitely say that recording at home gave us a lot more freedom to do whatever we wanted to do.

Dead Rhetoric: Looking through a number of older interviews, it feels like everyone asked you what it was like recording your debut with Erik Rutan. Did you ever get tired of getting asked that question?

Uttley: Yeah, Erik obviously is one of the most death metal people on the entire planet I would say. He’s been doing it for a long time and he’s really good at what he does and we learned a lot from him. This time around, financially and time-wise it was easier for us to stay at home and record [the guitar and bass]. We did the rest at Atrium Audio, which is about 40 minutes from my house.

Dead Rhetoric: I watched the “Sand Baptism” video the other day; whose idea was it to end the video the way that you did?

Uttley: That was kind of my idea and kind of Dave Brodsky’s idea, he was the one who directed the video. We both came up with the idea together. We wanted to do a music video, but we didn’t want to do another one where it was just us playing our instruments. We wanted to do something that had kind of a story to it. Really, we didn’t have a huge budget for the video so we crafted up this silly little plot line. The chorus of the song is “I am the sun” so we dressed Jake up like the sun. That’s basically it. It wasn’t anything crazy, other than we didn’t have a whole lot of time or money so we did the best with what we had.

Dead Rhetoric: I thought that was him. I couldn’t tell for sure with some of the cuts.

Uttley: Yeah, I think he did a pretty good job with the part and he had a lot of fun. It was a last minute idea but a lot of people seem to think it’s funny so I think it worked.

Dead Rhetoric: Obviously, the lyrical slant with each album plays into the seasons, but do feel that the musical end needs to stand out just as much in that regard?

Uttley: The first record started with this one guitar part, signifying that it is springtime and new life is being born. I guess the songs have a more springtime feel to them. On Monarchy, we started it with a more bleak and dark sounding, barren landscape. Like you are in the desert and the sun is bearing down on you. The seasons thing is more of a lyrical thing than a musical one, but we definitely think of clever little ways when writing the music to insinuate that it is summertime or whatever but it is definitely of a lyrical thing. But the musical part is considered when we are writing.

Dead Rhetoric: Did you intend to have the album start out darker and towards the end it becomes more esoteric and lighter?

Uttley: We did. We kind of wanted to start the record with the more dark and heavy sounding stuff. Our older fans are more fans of a traditional death metal sound. Then as it goes on, we introduce the newer elements: the acoustic guitars and instrumental stuff. We arranged the tracks in that way on purpose. To have it darker and then go into this more emotional and aggressive kind of sound as it goes on.