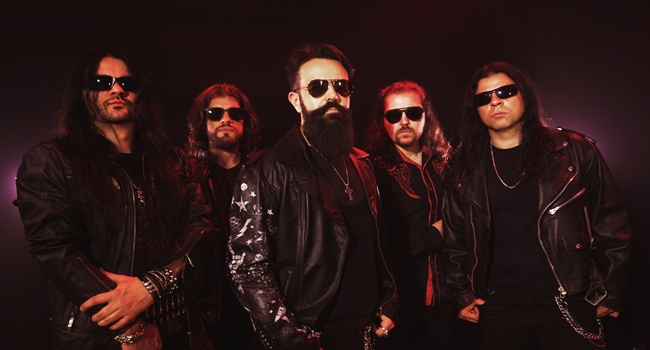 Brazil has always been a hotbed for classic traditional heavy metal – especially given Iron Maiden’s prowess headlining the massive Rock in Rio festival decades ago. Inspiration often breathes vitality into other musicians seeking to put their stamp of creative spark on the scene. Such is the case for RF Force – who recently released a captivating self-titled debut album chock full of strong melodies, riffs, choruses, and twin guitar harmony lines. We reached out to guitarist Rodrigo Flausino to fill us in on his early memories in hard rock/heavy metal, the start of RF Force including work in Dio and Iron Maiden tribute bands, thoughts on the Brazilian metal scene (and struggles to gain acclaim), favorite albums, plus specific challenges and future plans.

Dead Rhetoric: What can you tell me about your earliest memories surrounding music growing up? At what point did you discover hard rock/heavy metal, and then advance to playing an instrument and wanting to perform as a musician in bands?

Rodrigo Flausino: I remember my mom and dad putting me in front of the television to watch rock videos. When I was a child, around 5, I remember I´d say my top five bands were Iron Maiden, Van Halen, Whitesnake, Twisted Sister and Kiss. Learning an instrument was something I started way later, when I was 13. I was so impressed with Iron Maiden at that time that I decided I had to try at least doing that. At school, around 16, I had my first experiences on a stage. I had a blast!

Dead Rhetoric: Tell us about the origins of RF Force – how did you arrive at the lineup that is currently in the band, and did you have any previous experience in other band(s) either cover related or original prior to forming? Did you also know straight away the style of classic heavy metal you were going to develop, or did this evolve over the course of initial talks/rehearsals?

Flausino: Me (Rodrigo Flausino), Ricardo Flausino – my brother who plays bass – and Marcelo Saracino have known each other for a while – for at least 15 years. We decided to put the band together and we approached Daniel Iasbeck and Lucas Emidio and they were in. We knew what kind of music we wanted to play from the beginning. Playing with cover bands is something we´ve always done. Marcelo and Ricardo are in a Dio tribute band called Heaven & Hell. I´m very active with Children of The Beast (an Iron Maiden cover band). We actually met each other in the cover scene.

Dead Rhetoric: Your self-titled album recently came out, first on Brazilian label Classic Metal Records, eventually gaining a wider release through Black Lion Records. Can you tell us how you were able to sign with these labels (or is it more of a distribution deal for one versus the other)? What are your thoughts on the songwriting and recording sessions related to this effort – are you happy and satisfied with the final outcome?

Flausino: It’s more like a distribution deal with Classic Metal. With Black Lion we discuss more about strategy and they put more effort into marketing as well. The first time I approached them they knew me already from Children of The Beast and my YouTube channel. The second, they saw our first video “Fallen Angel” and liked our material. I´m very happy with the job we´ve done. It sounds the way I wanted, traditional metal but with a modern approach. The labels didn´t weigh in on how we sound. Their focus is on selling the album.

Dead Rhetoric: What can you tell us regarding the fine cover art by Quinho Ravelli? Did you work with him in tandem to flesh out some of the ideas – as I sense there are symbols and images that pay homage to some of your influences and favorite artists?

Flausino: We worked together developing the ideas. I wanted to have our symbol and people around working on building it. That´s what I believe. People´s efforts as a group can make a band happen. We wanted to explore the art that suits old school heavy metal cover art. So, as we´re both big Maiden fans… There is no way we can hide our influences.

Dead Rhetoric: How did the video shoots go for “Fallen Angel” and “The Beast and the Hunter”? Any special stories or surprises take place, and what are your thoughts on the importance of video work in the social media/ internet age – is it as important of a tool as say the 80’s/90’s when MTV and major video channels ruled the airwaves?

Flausino: We shot both on same day. We wanted to introduce the band in a simple and effective way. I think the videos are as important now as they were back then. People are much more visual nowadays. No one will know who you are if you don´t have videos. And we must have plenty. It´s easier to get bored today with tons of material on the web. At least it´s easier to produce a video. By the way, check out our video for “Old School Metal”. Very cool!

Dead Rhetoric: How would you describe RF Force as a band when playing live? What do you want audience members to take away after seeing a performance, and what have been some of the most memorable shows/festival appearances that the band has made to date?

Flausino: We´re planning our first show in 26/6 in Sao Paulo, Brazil. I want people to get the vibe of old school heavy metal, with lots of melodies, guitar riffs and solos and, of course, catchy choruses.

Dead Rhetoric: What do you consider some of the biggest challenges or obstacles RF Force faces as an up and coming, rising artist? And how do you plan to overcome them?

Flausino: The challenge is to do shows with good attendance. In order to grow a decent audience, we´re already working on new material often, doing lots of interviews and planning to play with other bands. I hope that people reading Dead Rhetoric dig our band and can be at one of our shows one day.

Dead Rhetoric: What do you consider three of the most important albums (metal or otherwise) that helped shape your outlook on music, songwriting, or the instrument that you play? And what is the best concert memory that you have purely attending a show as a member of the audience- and what made that show so special to you?

Flausino: It´s always difficult to choose… Maybe Powerslave (Iron Maiden), Hemispheres (Rush) and 1984 (Van Halen). I don´t have an excellent memory so, I can tell that recently, seeing Y&T made me very eager to record new music and play the best I could.

Dead Rhetoric: How would you describe the heavy metal scene in your part of Brazil? Do you believe there is proper love, support, and appreciation for not just the international artists that play your country, but the domestic talent that is trying to make an impact on the scene? Who are some artists that we need to look more into?

Flausino: In Brazil many people love Iron Maiden, Judas Priest, Helloween and many others. But when it comes down to our bands, only Sepultura, Angra and Angra´s ex-members projects seem to get decent attention. I don´t know why. We´ve got tons of good bands such as Korzus, Ancesttral, Carro Bomba, Dr Sin… Rock in Brazil currently works like when we´re watching Netflix or we go to the movies. Mostly foreign movies and series get attention.

Dead Rhetoric: What worries, or concerns do you have regarding the state of the world currently? If you had the power, control, energy, and resources to make an impact in any area, what do you think people need to focus on the most, and why?

Flausino: I think that people should be more human, respectful and be at peace. It’s sad to see most rock pages focusing on controversies only to get more likes. It’s sad that people are disrespectful to each other so easily on these topics. It’s sad to see people making fun of the ones that speak against war. People should be thinking more like ‘what if this was with my mother, son, sister, friend…’. I hope the world turns out to be a better place, where you can do what you do well, have talent and don´t have to struggle to be someone.

Dead Rhetoric: What special interests, passions, or hobbies do the members of RF Force like to engage in away from music when they have the free time to do so? And do you have the proper support from family members, significant others, and friends when it comes to all your musical activities?

Flausino: Our families are all very supportive. We´ve been musicians for a while. But the thing is, we´ve got so much to do in order to make it in music that there´s no free time for regular hobbies. Music is our profession and our hobbies.

Dead Rhetoric: How do you see the next twelve months going for RF Force when it comes to activities now that the album has been out for a little while? Do the members of the band have any other projects/bands we need to know about?

Flausino: I see us playing live as it must be for a metal band. Apart from our band. Marcelo Saracino is in a progressive metal band called Undertime and Daniel Iasbeck keeps a legacy of his work with the band Exxotica.