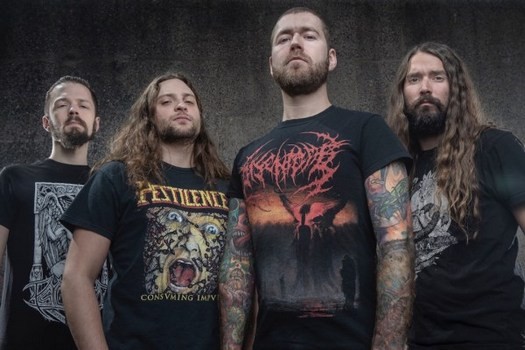 Dead Rhetoric: I’ve read from a number of interviews about your love of heavy metal. What do you love most about it?

Davidson: It goes against the status quo. It’s not meant to be for the general public, “the masses.” I’ve always been drawn to music that goes against the grain; something that’s rebellious and revolutionary. Not only in the subject matter but also the compositions. That’s really what draws me to heavy metal, looking at it as protest music against establishments. Whether it’s a way of thinking in the musical realm – pop has this chorus and it has to fit into this bite-size chunk for people to accept it. Metal goes against that grain. Then of course, the subject matter – metal tackles a lot of different issues that other genres shy away from tackling. They are too busy painting a lovely picture of what they hope things were [like].

Dead Rhetoric: It seems like one thing that seems to come up with Revocation, even though you are the only founding member left, is consistency. With the change in members and how you have changed/expanded your sound, how do you maintain a level of consistency in your music from release to release?

Davidson: I don’t know, I think it’s just a passion for the genre. I’ve always been very hands-on with the music and have been the main composer. I try to hold myself to a high standard. If I’m writing for the new record and it doesn’t sit well with me, first and foremost, I don’t even bother bringing it into the session. If I’m not feeling it, I don’t want to try to force a square peg into a round hole. I’ve always been prolific in that way – I’ve written material that we stand by and are excited to record and release.

Dead Rhetoric: Looking at the history of the band, do you think there were any game-changing moments as far as records or tours, where you saw the popularity of the band increasing?

Davidson: I think the Deathless album cycle in general was a huge turning point. We were working with a brand new label and had more of a world-wide presence. All of the tours that we did were really, really great. Even tours that were really surprising. We went out on tour with The Contortionist. They are metal but they are very progressive, with a lot of singing and stuff like that. We worked really well together and we were surprised at how many people were fans of both bands at the shows. So there was a lot of crossover there – certainly our music is on the death metal side, but we have a lot of progressive elements as well. That made us think – we can cater to different crowds with our music. We touch on a lot of different notes. I have always felt that we can tour with Cannibal Corpse just as well as we can tour with Megadeth or even a progressive band like Animals as Leaders.

We haven’t toured with Megadeth yet, but we’ve toured with Animals and Cannibal and I think the quality of our music and the level of musicianship is really high – so it appeals to a lot of different fans. At the end of the day, they are all extreme genres. Megadeth has lots of guitar fireworks going on all over the place, Cannibal Corpse is the same, but in a different way. The progressive bands…again, it’s another form of that. I think that fans of this type of music are drawn, more and more, to different pockets of these genres because there is an overarching aesthetic across all of them that might be intriguing to them. I think we touch on a lot of those different notes.

Dead Rhetoric: As you continue to write more and more albums, are you influenced by more current acts, as opposed to just the older and past acts?

Davidson: It’s a mixture – I’m always searching for new music. Your question before about why I love metal…there’s always so many great bands coming out with awesome stuff. There’s so many people that want to push the boundaries of the genre. That’s another reason that I love metal so much. This year there have been a couple great releases that have come out – the new Gorguts I thought was really fantastic. The new Wormed record, in terms of extreme death metal, it’s just so interesting in the riffs. Then there’s the Defeated Sanity album – they did a split with themselves, which I thought was so cool. They did a progressive side and a brutal/slam side, and I thought it was so cool that instead of merging those two genres they played them separate and apart. All of these bands have such great ideas and different approaches to the genre. I am definitely being inspired by new releases all the time, delving deeper and deeper into the underground.

But of course, nostalgia is such a powerful thing. We were in the van the other day, listening to old Dimmu Borgir records and just rocking out. Old classic rock records that we grew up with. There’s so much power in music that you grew up with as a kid that will always be an influence on you. That’s when music was at its most fresh and most exciting because you are experiencing these things for the first time.

Dead Rhetoric: As a guitar teacher you have been doing lessons on tour. What are you finding that younger players are looking for, from you, as a teacher?

Davidson: It varies. I think a lot of people come to me because they see that I have a grasp of theory. Maybe their playing is where they want it to be but they don’t have the understanding, so I can fill in a lot of those blanks. Other people have specific questions about Revocation songs or something like that. I’ve found that most people just want to come to find out how to be a better overall guitar player. I try to take it a step farther and say, “How can you be a better overall musician?” Composing, not only for your instrument, but for the big picture for the entire song. So I try to tackle a lot of things in my lessons depending on what my student’s needs are and what they want to achieve.

Dead Rhetoric: Once the Summer Slaughter is over, do you have plans for what Revocation will be doing for the rest of the year?

Davidson: We will be in Europe with Obscura in the fall, along with Beyond Creation and Rivers of Nihil. It will be a tech-death wet dream of a tour right there! Then I think we are going to come back and do a headline/co-headline tour but we can’t announce much yet as the details are being worked out. The one thing I can announce for 2017 is that we are confirmed for the 70,000 Tons of Metal cruise. It’s the first time we’ve ever done it, and I’ve heard it’s a blast so we are looking forward to that.