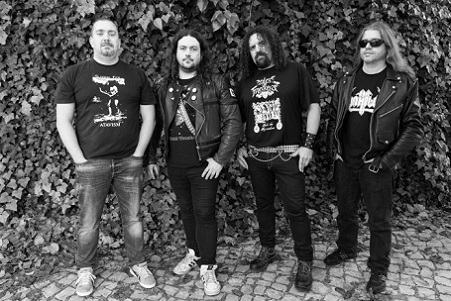 Let us not play the geographical card with Ravensire. They may be from Lisbon, Portugal, but their brand of vintage, denim-loving metal totally screams the U.K. Germany, and west coast of the U.S. In essence, where you come from doesn’t always dictate how you’ll sound. After its 2011 formation, Ravensire – led by guitarist/founding member Nuno Mordred – has been gradually working its way up through the international metal scene, scoring a slew of festival appearances to coincide with their release of 2013 We March Forward debut. Fast forward a few years and the band now calls well-respected Italian label Cruz del Sur home for the release of The Cycle Never Ends.

“We’re fans of European metal and [the] NWOBHM, but we’re also fans of U.S. metal, Australian metal, and whatever else is out there,” begins Mordred. “As long as it moves us, we really don’t care where it’s coming from! Our sound is based equally on bands like Iron Maiden or Judas Priest or Solstice, as it is on bands like Manowar or Slough Feg or Holy Terror or Brocas Helm! It’s more a matter of having the right feeling.”

One understated influence on Ravensire is Running Wild, the famed-in-Europe/maligned-in-America pirate metallers. The band pays occasional homage to Rock ‘N’ Rolf Kasparek and clan on “Trapped in Dreams,” a song that according to Mordred, was composed by now-former guitarist Zé Rockhard. “Rick’s vocals being very hoarse will naturally bring to mind such ’80s German vocalists like Rock ’N’ Rolf or Chris Boltendahl [Grave Digger]. All in all, it’s all a very interesting mix, because Zé would incorporate his German chops into his playing, while I would go more for an Anglo-American approach. Diversity is, of course, the key!”

Contrary to our initial thoughts, the album title of The Cycle Never Ends does not carry a deep, world-weary meaning. Instead, it ties into one of the most important things in the collective lives of Ravensire: metal. The title is taken from a lyric in the song “Temple at the End of the Earth.”

“The Cycle Never Ends basically represents two things: the cycle that bands normally go through with their music: composing, rehearsing, recording, playing live, etc… and also the fate of heavy metal that no matter how low in terms of popularity, it has the power to perpetuate its cycle of existence!”

The steady gravitation back to classic metal has often been a nuisance for those who were there “back in the day.” Being that Ravensire play a brand of classic metal, and are on a label that specializes in such music, it begs the question: Why aren’t these folks throwing their support behind all of the great, new bands populating the scene?

“It’s interesting to note that a few of those extreme fans are ‘mellowing out’ and discovering (or re-discovering) what heavy metal is all about. But even so, it’s a bit distressful that most people prefer to praise reunions of ’80s bands that have been out of the system for so long, than to support contemporary bands making interesting music… Especially when lots of those reunited old bands were nothing special to begin with and are only being hailed out of some nostalgia trip. As for our place in today’s scene, we don’t feel any responsibility whatsoever. We simply play what we like and as long as we keep enjoying what we do, things are great!”

Speaking of which, Mordred says the Lisbon metal scene is gradually growing, citing a bump in attendance from 60-70 to 150-200. For an underground form of music in a country that doesn’t have much metal history to speak of, promising numbers indeed. For now, Ravensire will head into the summer months of 2016 with a full head of steam, and lots of plans in mind.

“After the release of the album, we want to play gigs in order to spread our sound as far as possible. Right now, the only thing booked is our place at No Compromise Festival in La Louvière, Belgium, organized by David and Christine Masse, but more dates will be announced soon. We also plan to start working on new songs and there are already a few ideas floating around.”