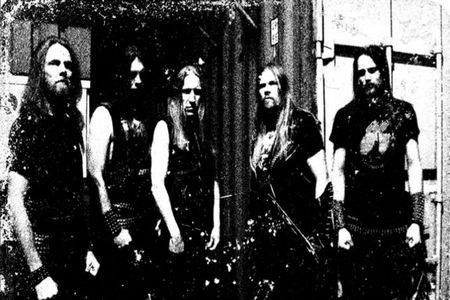 Dead Rhetoric: While Death seemed to emphasize more of the late 70’s/early 80’s metal influences of the band, your new album Sveversvm to my ears harkens back to a lot of mid 80’s Accept, Savatage, and Sanctuary textures beyond what RAM loves to display in terms of hooks, harmonies, melodies and riffs. How would you describe the new album from your point of view, did you go in with a different game plan as far as songwriting or recording?

Granroth: From my point of view we did what we always do and we didn’t change the process of writing except that Daniel had left the band and Martin was not yet fully involved in the songwriting for Svbversvm so Oscar and I wrote the majority of the songs. As I see it, the new album contains a little from every previous album and perhaps something new. We always have a plan and that is to make a diverse album and during the process we will find out what is needed or missing to make such an album. I believe all the types of ideas for melodies, harmonies, riffs and lyrics have been there from day one, it just happens so that these ten songs ended up on the same album. Regarding the recording process, we did change that intentionally. This time we didn’t want to make a second Death album, which was recorded almost live. We wanted to use our new studio and learn how to do things and try different methods and really take advantage of having our own studio and the fact that we could produce ourselves without limits.

Dead Rhetoric: A lot of the lyrical content on the new record tackles the weakness of western man and the philosophical voids as a result of man believing death doesn’t exist. Do you believe this is a natural evolution from the younger generation or has this penetrated all facets of humanity?

Granroth: I believe these questions have always been present but we don’t allow ourselves to think about them or our society doesn’t seem to allow us to, or at least doesn’t promote the idea of awareness of these things. One has to be occupied at all times, consumption is the new religion, and if the masses are occupied with petty things the rulers will have their way.

Dead Rhetoric: Another quote I read from Oscar in a recent interview states ‘Metal has to stay subversive or it will die’. Where does RAM stand out in this regard and how do the fans get the scene back on track in your view?

Granroth: I can agree with that and I hope that the lyrics of our songs will challenge the listener. Oscar is the main lyricist but we discuss ideas of course. I hope that we stand out as we really don’t want to have songs about killing dragons, partying all night long or just love songs. We usually deal with heavier topics and have a look at things from a philosophical view. If you agree on the stated then it is your responsibility as a band and as a fan to support those ideas. It can’t be in any other way. Those in the scene make the scene. Simple as that.

Granroth: If I could choose just any package I would have chosen Black Sabbath, Judas Priest, Iron Maiden & RAM! My best concert memories are Iron Maiden – Somewhere on Tour, Judas Priest – Painkiller Tour and more recent years, opening for U.D.O and Accept, those were great moments. Add Heaven & Hell to those, almost forgot…I’m very happy I had the opportunity to see Dio with Black Sabbath before he passed away.

Dead Rhetoric: You’ve also raised concern about the lack of intellectual content for the rock and metal genres – what should the job of a musician be these days? To provoke, to entertain, to stir debate, to push people into action- or a combination of all these factors?

Granroth: I’m not the one to tell another musician how to do their job but I’d value a combination of all the above more than just provocation or to just stir a debate. It has to lead somewhere I think. And action without thought would be a disaster. Plain entertainment is probably harmless but pure stupidities will in the long run damage your brain. I heard of this person who needed a smart phone app just to keep track of all 23 TV-series she was watching…I don’t like to be judgmental but I couldn’t help wondering, what does she want to do with her life..? Regarding music on TV: when rock and metal are on the “Idol” TV-shows it’s going in the wrong direction.

Dead Rhetoric: Who do you consider some of the best bands when it comes to their lyrical and musical content when you have the time to take them in for personal pleasure? Have you ever had the opportunity to meet and speak with some of these ‘mentors’?

Granroth: If we’re speaking lyrical and musical content combined I’d say Black Sabbath with Dio or Dio (the band). Not sure if I always interpret them in a correct way but there a just some lines that hits home. Judas Priest of course when it’s not all about metal monsters. I did meet Dio once but never had the opportunity to chat with him.

Dead Rhetoric: Is RAM still a self-managed entity? If so, how do you handle the responsibilities of business while still maintaining some sense of sanity?

Granroth: Yes, we’re still a self-managed entity but we have gathered a collection of contacts that we can turn to when it comes to booking and other matters. Somehow it have become second nature to us to do it this way but…there have been occasions when I thought I’d lose my mind. All in all, I think this is a great experience, to take care of as much as possible within the group. In today’s music industry the money is not pouring in and one has to know how to survive by small means. We pretty much do everything as we used to in the early days except we don’t release our own records and we don’t pay for the recordings, that’s what record labels are for and in our case we’ve worked hard to finally find a good one.

Dead Rhetoric: When it comes to RAM’s following, what matters most: the quality or quantity of people into the group? And what have been some of your favorite live show memories for RAM through the years – any particular tours or festivals?

Granroth: I would have liked to answer quality over quantity as that is how people matter to me in my personal life as it is in most people’s lives, I guess (?) but for an artist I believe the purpose is to show your work to the world and that would mean as many as possible. There’s also the business side to it: you don’t get the ride if no one can pay for it, it’s all give and take. We are not really concerned anyway about this as we believe there’s room for both. They’re both important.

The tour with Sebastian Bach in 2004 in Spain was special as we did connect with people that later have become important in our career. We still have contact with some of these people.

Dead Rhetoric: How do you see the next 12 months playing out for RAM as far as promotion, recording, and touring activities? Would you like to venture into North America in support of this album, even if on a limited festival or small one-two week basis?

Granroth: We just played in our hometown for the release party and we’re still busy with activities concerning the release: interviews, plans for a video shoot, plans for a tour and discussions with festivals, it’s quite hectic but in a good way so to speak. No recordings are planned for the moment as our intention is to play live as much as possible so we’d certainly hit the road in North America if we get the opportunity, be it a small festival or a club tour.. My guess is it’ll take at least a year before we start recording the next album.