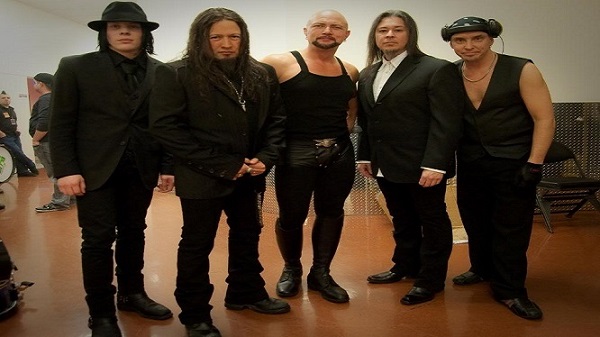 The embodiment of “progressive,” Queensryche continues to move forward, in spite of how distant their high-class metal era seems today. The days of steely, strong riffs, and conceptualized songs of the political and human nature are long gone, something that is brought to the fore now that 1990’s Empire is being reissued. While it didn’t eclipse its Operation: Mindcrime predecessor in terms of output, it allowed Queensryche to reach a whole new segment of fans thanks to the sterling success of “Silent Lucidity,” and a to lesser degree, “Jet City Woman” and “Another Rainy Night (Without You).” Beyond that, it was metal of the intelligent nature, a direct contrast to the lazy, sloppy thrash that was so hip at the time.

The ‘Ryche of today has been tied up doing cabaret shows and recording a new album, but the topic of this interview was to be Empire, which is celebrating its 20th anniversary. The always cordial and polite singer Geoff Tate phoned Blistering to talk about Empire’s legacy, as well as what lies ahead, tossing in a few words that will probably rankle metal fans who still haven’t quite figured out Queensryche has no intention of becoming a nostalgia act…

Blistering.com: Twenty years since Empire…is that one of those head-scratching moments like, “Where has the time gone?”

Geoff Tate: Yeah, when they first started putting this together, it made me think of how much time has gone by. Next August, in 2011 will be our 30th anniversary [laughs]. Hard to believe. Honestly, we’re not the kind of band that looks back. We’re always working on the next thing and I hadn’t listened to Empire in a long time until they sent out the master and I did an A-B between the original and remaster and listened to them back-to-back. It’s a nice package.

Blistering.com: With Empire, you were coming off Mindcrime, so what were the studio sessions like?

Tate: I think it was the same as before. We had a pretty good working team with [producers] Peter Collins and James Barton, so they were used to working with us and we didn’t have to do a “get to know you” phase, we just went right into it. The tracks came pretty quickly; we were pretty well-rehearsed, like we like to be. Everyone knew the songs, so it was just a matter of being at the right place at the right time and letting the magic happen.

Blistering.com: That was arguably the height of your writing tandem with Chris [DeGarmo, ex-lead guitarist], too.

Tate: We could always write together, we clicked and had an easy time communicating. We’d talk about whatever was interesting to us at the time and that usually turned into a song. We’d go to lunch, then to the studio, and work on whatever we were talking about at the studio. It would be dinner time, then we’d be done [laughs].

Blistering.com: Do you remember what songs came first during those writing sessions?

Tate: I can’t remember the order of when they came out, but I believe the title track was one of the first things written. “Jet City Woman” was pretty close to the beginning. I remember the last song was “Silent Lucidity,” though. Come to think of it, “Resistance” was the last one. But anyway, that song had a curious beginning to it and we had written the music for it and recorded the basic tracks and played it for Peter Collins, and he didn’t care for it. He felt it wasn’t as strong as the rest of the tracks were, but we were really hell-bent on that track.

We were talking about [composer] Michael Kamen and all of his contributions with the orchestras and stuff, and he was a guy we worked with in the past. We had to wait for his orchestrations to come through in the mail because he was in England at the time and it finally came and put the tapes and what we recorded together, synched them up and listened to it all at once. When it was done playing, Peter stood there with a smile on his face and said, “I stand corrected! It’s going on the record.”

Blistering.com: That song still gets played on FM Radio, so has that song become a double-edged sword for you? It’s what most people still know you by.

Tate: It’s been one of those songs that people have a lot of stories about, either backstage or on the street corner. They want to tell you about the first time they heard that song or what it means. It could be a song they met their wife to, or the song played at the funeral of their friend or their dad, all kind of different stories.