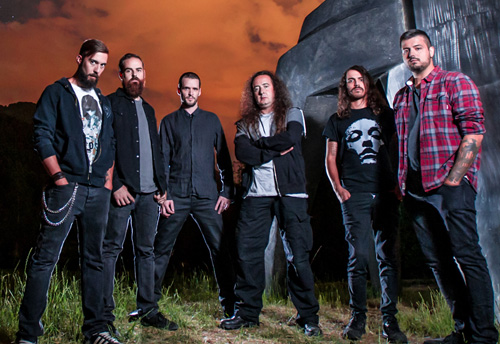 Dead Rhetoric: Going along with the more international approach, what inspired you to have Paul Masvidal of Cynic guest on two songs?

Espinosa: That was incredible! We are from a tiny country called Andorra, and we always feel like we are far away from everything. We played Euroblast last year – the last Cynic show they played. We met him that day and he was really nice, but we didn’t talk to him about [being a guest on the album]. We were working on the songs last year and suddenly he came up in a conversation. We have a spiritual approach to our lyrical content and we know he is too. So we talked about contacting Paul, because we thought he’d like our lyrical content and may want to work with us.

So we asked our management to try to contact him, because we didn’t have a direct contact. He said he was totally up for working with us. Now it was like, “whoa, we have Paul Masvidal working with us on the album!” In the beginning, we just wanted to make the introduction. Once we had him, it was like, “guys, we have Paul, maybe we could make him sing?” So he agreed to sing, as well as record a solo. It was very funny, because we were always asking him and the final thing was getting the vocoder thing to happen [in the intro]. Paul sent us an email and asked us if he could put some alien-ish, vocoder thing in his voice. We were thrilled, because we are fanboys. Paul is a fantastic guy – it was great to work with him.

Dead Rhetoric: Looking at the songs, is there a link between “One of Many” and “Many of One?”

Espinosa: Yes, of course. We wanted to present the idea of having a singular life, meaning that every individual is unique. When you start relating these spiritual concepts, you start to realize that everything is kind of connected, and ties back into a whole in the end. So we wanted to express that by putting it into those two songs. When a person is in an unconscious state of their life, they aren’t realizing anything besides the singularity – the material things and nothing else. Then they start to realize that there is something more, and they evolve in that idea. Then they get to an enlightenment status and that’s the point [of the album].

Dead Rhetoric: So are the spiritual aspects of the lyrics just as important as the music itself?

Espinosa: For us, we are musicians and not writers – music is always first. But when we started working on the Shin-ken album, we worked on the Japanese philosophy of the samurai. In a way, we gave some positive message – living life and working hard in every aspect in your life. Then we started going into the mediation aspect and some of the band got really into it. From that moment, we thought that we could use the band to make a positive statement and achieve something more than just putting in any sort of story with the music. A lot of people have loved that positive message, which is not so usual for metal. We have received messages from fans that we have helped them to live better lives or overcome personal problems that they have faced. That has encouraged us to continue that message – we have no doubt that we wanted to make a deeper insight on the spiritual aspect of the lyrics.

Dead Rhetoric: Do you find that there are a lot of people that connect with the band that have never heard of Andorra before learning of the band?

Espinosa: I was born in a town in Southern Spain, Albacete, which has about 200,000 people in it. They have about three times the amount of people in that city than Andorra has in total. We know that we live in a country that people probably can’t point at on the map. In a way, it’s normal that people don’t know where Andorra is. For us, it’s funny because we have been putting the country on the map for all those people, which is great. Actually there are a lot of people in Andorra that love us for that reason. They may not like the music, but they like that we are [promoting the country]. We are proud to do that.

Dead Rhetoric: In 2015, you had planned to be a part of the ProgPower festival here in the US. Was it frustrating to make plans and then ultimately end up having to miss the festival? Do you have plans to make another attempt at it?

Espinosa: When we first received the news that we were going to be on ProgPower, it was amazing. We had toured in Europe and it was exciting to play in London, Germany, and Switzerland and we got used to playing there and then we went to Asia. We did Tokyo, Beijing, Shanghai – as a human being, it’s great to have all of those experiences. At least for me, I always wanted to play in the States. Glenn, the promoter, wanted to bring us over for ProgPower and contacted us a year and a half in advance. So we were so excited for that time and we were trying to get visas. The booker at the US agency told us there were problems getting the visas but thought they would arrive on time.

I think it was then July and we didn’t have the visas. It was frightening because we had to purchase the flights and it’s really expensive to get that investment for a band like us. There were some numbers that we had to get [for the visas], and then we had to go to Madrid to get the visas there, which is not exactly easy for us because we live 700km away. It wasn’t easy, and we decided, with Glenn, that there was going to be a good chance that we would not get the visa on time. If we could get them, there could still have been problems with getting the visas in the embassy. It’s not just getting the numbers but there are interviews, and the visas have to be delivered, which can take two more weeks. So we cancelled, which was frustrating, because we really wanted to do it. We are actually planning to tour in the US next year, but there’s nothing confirmed. But the plan to come to the US is always there. It’s a matter of making it financially possible and find the promoters that want us there. So cross your fingers.

Dead Rhetoric: In terms of touring in Europe versus Asia, did you notice any differences playing in different continents?

Espinosa: The biggest difference was the fans. The fans in Asia were crazy! They are very devoted. We first went to China, and there are very few bands that play in China. So there’s not a lot of options to see a metal show. When you get there, you are from the other side of the world, and they treat you [very well]. It’s huge – they are very loyal fans. We had an amazing experience with a Japanese guy that we knew for like 10 years. He sent us an email when we released Truth Inside the Shades and we had some communication over the years ever since. We finally met him in Tokyo. Carlos told him that if he ever went to Andorra, to send an email and he would have a place to stay, and the guy started to cry. It was such a beautiful moment. We will always remember that.

We felt different because we were a much smaller band, particularly in Europe, and every time we toured in Europe we were a support band so there weren’t as many people in the crowd for us. In Asia, all of the crowd was there for us. I think the feeling is different, but I think that since we are going out as headliners, it will feel similar to what we had in Asia with this European tour.

Dead Rhetoric: You mentioned the European headline tour, is there anything else the band is going to be up to this year?

Espinosa: The only thing that is confirmed is the European tour. We are focusing on that, because it’s one of the biggest steps in our career. It’s a big responsibility to headline a tour and I think that it will be great. We have plans for the future months – we would like to go to the States and go to Asia again. It all depends on how successful the album is and if the promoters are willing to take us. There will also be some festivals, such as Tech Fest in the UK and Metal Days. So we are happy with that for now. 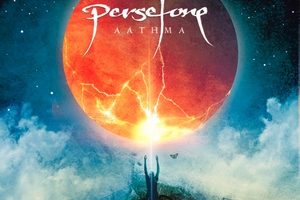