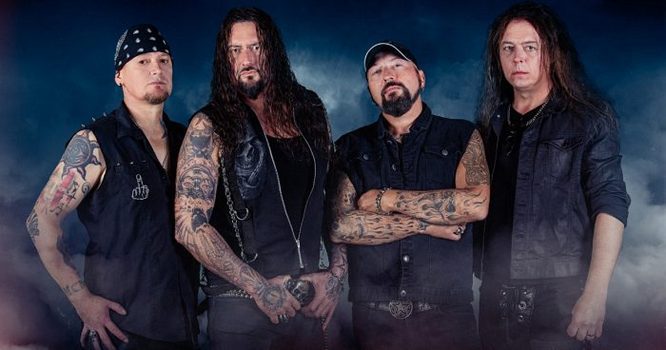 Dead Rhetoric: Will Pänzer continue to be selective as far as touring/festival spots because of the primary activities going on for the band members in their main acts? Do you think this increases the profile of the band due to the specialness of limited live appearances?

Schmier: Yeah, we want to play live but of course this is not so easy. The fans will dictate how much Pänzer is able to play out, the more successful the band is, the more the demand is there. The more promoters that come up with proposals, the higher the chances are for the band to tour. I don’t see us playing any headlining shows in the next two years, but I see us as a main support for bigger bands and then playing festivals. We all have our main bands but we love what we do for Pänzer, we take control of the time that we have away from our main bands for this. Of course, it makes things special to not play out too much – we would like to tour for some shows and play together.

North America is still a big target, and not so easy. But I’m very happy that this album will be coming out in the states, because the first Pänzer album didn’t get officially released there, just as an import. We will build on this, we don’t have to hurry with Pänzer, we don’t have to prove anything or reach any goals. If we get the chance the tour we will take it, it will be up to the fans. If they like the album, there will be shows and we will see from there.

Dead Rhetoric: What are some bad recommendations you hear from people in your profession that you wish people would take in a different direction?

Schmier: I don’t know. I try to give advice, especially being in the business now for over 35 years. Younger players come to me, and they ask me for advice on the contract side, especially when it comes to signing certain deals. All of this is changing compared to the past. I’m not a manager kind of guy. What I think is a misunderstanding between the bands and the fans is a lot of fans think that you can decide anywhere you want to play. Iron Maiden, AC/DC, Metallica- they can decide to play in Rome, San Francisco, and Moscow- but in the end, as a band in our genre of metal, the underground- it’s the demand of the fans that decides in the end. If we come to your town, it means the promoter that is booking the show wants us and we are glad to play. If there is no demand or no offer to come into your country, your city, your state- we can’t go. That’s the biggest misunderstanding. The band is not the one who says I want to play Arkansas or Kansas, it’s the agents between the local bookers and promoters. I love to play everywhere and I wish I could decide, that the band would be big enough to play certain cities.

Keep bugging your local promoters to get this band and that band into town, and maybe if you are a big enough pain in the ass it will happen. People think it is so easy to come and play a specific town, and I think that is the biggest misunderstanding for music in general. The bands would love to play your town – they get angry at you and think that (we) don’t love their city. Spread the word- if you read this interview, talk to people in your local scene, support the local scenes, tell the promoters what bands you want to see and hear and they may be able to bring them to your local cities.

Dead Rhetoric: I remember that was one of the things you faced with the latest North American Destruction tour this spring- you had a limited window to get those dates in before the European summer festivals, and people were complaining that you didn’t hit their area…

Schmier: That is how it goes. I get an offer from my American agent, and we had 30-40 shows that I would do. We had to take a look at the money to see what offers work best, and if you do the wrong shows you will lose money as American tours get more expensive. It’s not so easy to play the states as people think in underground metal. For us this time it was important to have four weeks to do this run, otherwise there was no spot left. This was the best American tour that we’ve done in many years, the most successful one with some sold out shows, in some of the best venues we’ve ever played in- major cities of Los Angeles, New York, Montreal. This was even better than the tour we did with Sepultura, and that was a great tour because of two strong bands together on a North American run.

There are so many cities to play- you have to go on tour for three months to play everywhere in the United States. When we were twenty or so we went out with the Cro-Mags for two and a half months in 1987 I think it was. And then you can play all the cities- but we are too old for this. You can’t tour more than five weeks at a time, otherwise your body will just not work anymore. I love to do this, but I need a break here and there, and I think five weeks is the maximum I can enjoy heavy metal at this high level every night. The bones are going to hurt at one point, and it shows that you are getting old- but metal keeps you fit. I love to be on the road- being in heavy metal is like being a road warrior. This is the main thing- I love the opportunity to see the world, to have all (these) different culture aspects and opinions. In the end, it unites us all- we are heavy metal fans, it doesn’t matter if you are black or white or green, or where you are from.

Dead Rhetoric: When rearing back into your musical development, which two or three bands made the biggest impact from those old school days to fuel the fire for your work in Destruction and Pänzer still to this day?

Schmier: A lot of British heavy metal of course. Three bands, that’s very difficult to name. One band from the British scene that was very important is Judas Priest. Without Priest, there would be no classic heavy metal for me. They kind of opened my eyes to the style, the leather, the singer- everything, Judas Priest will always be my favorite heavy metal band. If it comes to the more extreme stuff, it’s Kill ‘Em All from Metallica, the most aggressive heavy metal that came out back then. Even though I liked Exciter with Heavy Metal Maniac, but when Metallica came out it was more aggressive and (much more) crunchy, more distinctive and extreme. It’s difficult to decide from the punk rock roots, The Exploited, G.B.H. or the Dead Kennedys- I will choose the Dead Kennedys because the lyrics and delivery were so unique. The lyrics of social criticism was ahead of its time- the English punk bands were more filthy and nasty, criticizing the system.

Dead Rhetoric: You’ve also been a big believer in supporting new talent in the scene, given your recommendations online for acts like Nervosa and Burning Witches among others. Do you believe more veterans need to carry that torch in newcomers for the vitality and future of the metal genre?

Schmier: I think it’s definitely important to give the torch to the new bands, they need your helpful thoughts. It would be nice to see these bands not have to go through the same mistakes that we did. A lot of those bands are very helpful, I don’t have to be a manager to give them advice. I meet a lot of good people when I am on the road, if I like the band I give them my support. I try to help my friends not make the same mistakes we did. It’s always funny that you see bands that talk about putting certain bands on tour, but they don’t fit with their style. I try to support bands that fit with my roots and my style. It’s an important task to give advice to the young kids- it should be a natural state of progress.

Dead Rhetoric: Where do you see the state of heavy metal today – are there new territories that seem to be grabbing ahold of the live market more than say 20 or 30 years ago?

Schmier: People are always looking for something new. Of course heavy metal has progressed a lot- but I don’t think that heavy metal needs to prove itself anymore. It’s like rock and roll and blues- why should these genres be more progressive and find a different way? Why should heavy metal change unless the people want it to change? I don’t think that’s the right way- there are enough categories and styles for people to find their own original heavy metal. It’s good that heavy metal is somewhat conservative. If you compare back in the day and now, what’s better, what’s worse- we definitely have a huge community with so many festivals and so many fans connecting worldwide that wasn’t possible back in the day. People think back in the day everything was better and sensational, I think we have a great scene nowadays. If you don’t think heavy metal is happening, it is happening on a social media level and with the shows. I play in crazy countries where you would never think there would be a heavy metal scene and there are several hundred or thousand people showing up every night. We never thought this could happen. Not everything can be bought with money- rock and roll in general develops itself, and it’s a fantastic thing that not everything can be controlled. Rock and roll should never be controlled.

Dead Rhetoric: What’s on the horizon for Pänzer and Destruction -as there are new releases for both, will you be doing more support shows for both releases when you recover more from your injury?

Schmier: The show must go on. For Destruction, I played a show two weeks after my surgery. We will always play shows, even this year. With Pänzer we will look into shows for next year- we have festival opportunities, and it will be interesting to see if we can get a tour going. It will depend on if the fans like the album, and the demand. For Destruction, the new Thrash Anthems II album will be a big influence on the upcoming setlist, we will change things around. I don’t think we will do a big, immense tour worldwide. 2018 begins with us writing a new Destruction album at some point, and it should come out in 2019. I’m so busy, I’ll see how things go. I’m confident that both things will go well. Destruction plays shows every month – even if we are writing a new album, we play one to two shows a month, it keeps the machine running and it’s the philosophy of the band, our life.