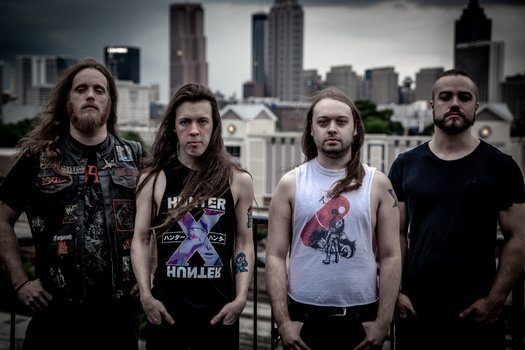 The US is a tough market to crack if you are a power metal-esque band. Americans are much more inclined to follow heavier and more aggressive acts, which has led interesting permutations of bands trying to be successful on this side of the Atlantic. Paladin is one recent example, with a sound rooted in power metal, but augmented by a more assertive thrash side with shredding guitar antics and occasional pushes towards melodic death metal. Their recently released full-length, Ascension, is a whirlwind of guitar heroics, soaring choruses, and catchy melodies. We grabbed guitarist/vocalist Taylor Washington to help us fill in some of the gaps about the band’s beginnings, musical approach, and what lies in their future.

Dead Rhetoric: How did the band initially get off of the ground?

Taylor Washington: Alex [Parra] and I were playing in another band called Sybaritic along with the original Paladin drummer, Aaron [Baumoel] and that band just kind of imploded and the three of us decided to continue on as a different band. So we settled on the name Paladin and kept going.

Dead Rhetoric: While you can discuss the band in terms of power and thrash metal, it’s really not just that. What do you feel really describes it?

Washington: I wish I had a succinct way to describe the band. We are like thrashy power metal with some melodeath elements [laughs]. But I think those three styles kind of sum up Paladin. It’s a melding of thrash, power metal, and some melodic death metal. There’s also some ‘80s metal stuff thrown in as well.

Dead Rhetoric: What do you feel is Paladin’s mission statement?

Washington: We want to play some power metal with balls, some shredding guitars, and we kind of sound European…we sound more European than American I would say. There’s not too much of that in America. Power metal isn’t really a big thing in North America by any means, so we kind of want to fly that flag and do it a little bit differently than maybe it would be done.

Dead Rhetoric: I have to laugh at ‘power metal with balls.’ Do you think giving it a little more heaviness makes it more approachable for people in the US where there’s less of a power metal scene?

Washington: Yeah, I actually do. That wasn’t my intent, but it was more of a by-product of the sound I wanted to create. But I think the ballsy element widens our appeal over here [in the US] and it allows us to fit in with other bands more easily than we might otherwise. Since we have different elements, we could fit in with a thrash metal, or even a more straight death metal bill and not be too out of place.

Dead Rhetoric: You had the 2 song demo and this was your first full-length. In terms of the recording, was there anything you’d like to try differently next time around in the studio, or anything you thought went particularly well?

Washington: The recording went fairly well. Alex and I do all of the guitar and bass ourselves at our own homes, because we both have recording studios. There’s no more comfortable way for that to be done as far as I’m concerned. With the drums and vocals, they were recording in a studio. We knocked out the drums in a weekend, which was great.

The vocals took a while, but only because the engineer, myself, and Alex all wanted to be involved in the process and we all have weird schedules. It was hard to coordinate the three of us being in a room together. But the whole process was pretty easy and I can’t think of any negative aspects of it.

Dead Rhetoric: I really like the artwork. I don’t think we get a lot of lighter colors for the most part in metal. What were you shooting for with the cover art itself?

Washington: We definitely wanted something bright and colorful. Partially for the reasons you just stated [laughs]; it kind of tends to go the other way. Alex and I wanted something that kind of resembled old Final Fantasy artwork. The piece that we used was done by Nen Chang, who is based out of Savannah, Georgia. Alex found her by coming across that piece somehow. That was commissioned by her from some other random person back around 2012. We liked it a lot, and she didn’t have time to do an original commission for us, so we were able to just license it from her. It kind of nails the art style we were looking for. The whole vibe of being colorful, distinctive, and eye-catching – it worked out for sure.

Washington: They were at the top of our list, as far as labels that we wanted to work with. But it was more of a pipe dream in my mind; I didn’t think we would have a chance. But one of my friends in Atlanta, Randy Drake, who plays bass for Fozzy, is good friends with Steve – Prosthetic’s A & R guy. He asked me if I wanted him to send them some of the Paladin stuff and I said absolutely. Steve liked it enough to want to work with us. It’s definitely worked out for us so far. They have been great to work with.

Dead Rhetoric: You said Prosthetic was your top prospect. They have a wide range of bands on the label – was there something that drew you towards that?

Washington: Specifically there was four bands, at least that I can think of: Marty Friedman is up there, as well as Exmortus, Holy Grail, and Spellcaster. Those bands are more similar to us, stylistically – especially Exmortus and Holy Grail, because they both have shredding guitars in the same way that we do. That was a big part of my reasoning for wanting to work with them.

Dead Rhetoric: In terms of the shredding guitar stuff, do you feel that there has to be a certain balance to it, so that it doesn’t come off as too much?

Washington: For sure, and I’ve already seen some reviews where it has said that shredding is cool, but it gets exhausting on the ears [laughs]. I love shredding my axe, but I definitely place a higher emphasis on songwriting. My main goal is to have songs that I’m happy with as songs, instead of technical masturbatory show offs. I try to keep the song in mind and not go too overboard or too wanky with the guitar theatrics.

Dead Rhetoric: Do you feel that your Bandcamp demo was successful in getting you noticed?

Washington: Yeah, I do. It got us noticed by some people, which was great. We didn’t have any press or any music available before that. I had some really rough demos, with programmed drums, no vocals or bass. I think the demo we put out really helped us a lot.

Dead Rhetoric: What lessons have you learned from playing on the road with other bands like Arsis and Necromancing the Stone?

Washington: Yes I have – so many things. Being able to sort of glimpse into the business side of things. Just everything concerning how a band on Arsis’ level of popularity kind of operates. Just how different touring bands handle all of the different shit that needs to be handled – transportation logistics and merch set-ups. So many things. It really gave me some valuable insight doing all of those tours. They were all on different levels too. The Necromancing the Stone tour that I did – they were a smaller band compared to the rest of the package. It was a Metal Blade 35th anniversary with Whitechapel, Goatwhore, and Allegaeon, which are pretty big bands. To see how a smaller band works, and how a pretty big tour package works, and how the other bands operate – it was really interesting to see how everyone does everything.

Dead Rhetoric: What does it take to get a band off the ground nowadays in 2019?

Washington: It’s a hard question since I’m not an expert [laughs]. It’s almost hard to say because there are so many routes that a band can take, and so many things that can happen. Especially nowadays, since anyone can record music and make it sound good. With social media, there’s so much you can do in that regard. I would say that you definitely need to have some kind of content, whether it’s clips on Instagram/YouTube and build a following that way. Have some kind of album that is well done and well produced. In addition to that, just play a lot of shows. Not just locally – start locally and get a good home town following and start spreading out regionally into nearby states. Start doing some smaller tour-type things. I think all of it plays a part, and I could certainly do better in some regards.

Dead Rhetoric: What plans do you have now that Ascension is out?

Washington: We have some local shows for the next few months. We are booking a three week tour in October for mostly the eastern side of the US right now. That’s all we have at the moment. We are going to try to find other stuff throughout the year. We are getting some interest from Japan – that would be a hard one to figure out both logically and financially. 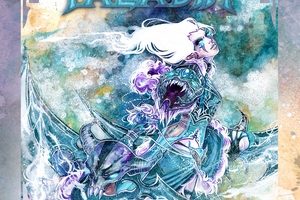