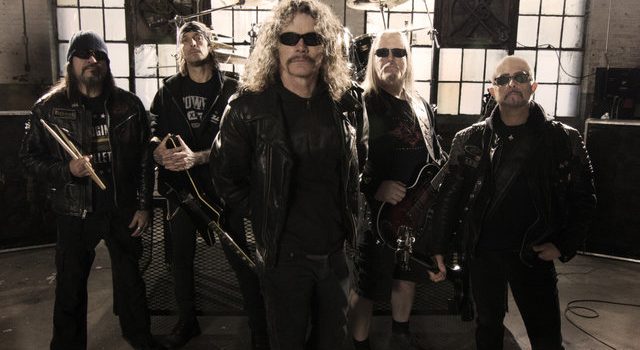 Circa 1997, Overkill was playing what amounts to “bowling alley” tours. Thrash was now totally un-hip, its big bands pursuing less-than-heavy sounds while the log-jam that once enveloped the ’80s and early ’90s now gone. Nu metal was gaining steam. What’s a stoic, hard-working, veteran band like Overkill to do? Simple: Put their heads down, plough forward and write an underrated gem in the form of From the Underground and Below. Released on the long-defunct CMC International (a label, at the time, known for rescuing past-their-prime ’80s hard rock and metal bands), From the Underground and Below marked a new era of groove for the Jersey guys. With a thick, highly-modern production job in tow, the consistency and more importantly, the potency of the album was demonstrative of a band who refused to go down easily. It helped set the course for the next 20 years of Overkill.

Overkill circa 2017 is much bigger than they were circa ’97. The gutter-thrash grit that helped defined the East Coast remains in full bloom, in particular, with this year’s sterling The Grinding Wheel. It’s an assertive bout of honest-man-metal, propelled by the ever-animated vocals of Bobby “Blitz” Ellsworth, a man of infinite wisdom and laughs, it seems. Now bounding across the country on the Metal Alliance tour with Crowbar, Havok, Black Fast and Invidia, we were able to sit down with Bobby Blitz prior to the band’s September 11 show in Pittsburgh. Vapor cigarette in one hand, bushy moustache lining his face, there are few better chats than Ellsworth. Here’s how it went:

Dead Rhetoric: You have been name-dropping the From the Underground and Below album of late in interviews. What is it about that album that resonates so much with you?

Bobby “Blitz” Ellsworth: With regard to that, I look at it the beginning of understanding a second part of Overkill. I think it’s what I’m most proud of. I think it’s when we discovered groove on that. That’s when for ourselves, we perfected it. The record is very cohesive. It’s ten songs that really rely on each other. It’s not the same groove through the whole record. It was like, “Look at all the other shit we can do here.” So it stands out as one of my favorite records based on the fact of the accomplishment. I think for its era, it’s one of the better-sounding recordings of that year, hands-down, whoever else was releasing records that year. [Noted British producer/engineer] Colin Richardson on the mix and us understanding the groove and us not losing the heavy metal while adding the groove.

Dead Rhetoric: That was an interesting time. You had just jumped over to CMC International, your contemporaries are having issues or are sputtering out. It could be seen as sort of an “F-you” record to everyone.

Ellsworth: In hindsight that’s true. At the time we were just saying “We have to push on and pay no attention to what’s going on around us.” If we pay attention to our own house and our own porch, it’s going to be a greater chance of success than worrying about what’s happening in California, Florida and in Germany with regard to popularity of other bands. I think just that era was kind of a proving ground to say “Hey, we were in this regardless of what the popularity was of the genre. We did this because we like to do it.” It’s probably one of my more proud moments in Overkill was doing it when it wasn’t easy and doing it at a level that was so high with regard to the quality of the music that was being released in the underground.

Dead Rhetoric: You mention the groove element of that record. While it’s there, you can’t consider it a “modern metal” record. You never took the bait.

Ellsworth: It’s a metal record that has, in my opinion, the right amount of groove that took it in a different direction. I think it’s cool to have different tools in your tool shed. For sure, we’re a thrash band. Occasionally, a blast-beat will show up here and there, but there’s double-bass and it’s roaring down the highway or the train tracks. That’s one of those tools, but it’s also great to have that pounding groove, to be able to feel that swing. D.D. Verni [bass] always said there’s two kinds of songs in metal: There’s this song [makes up-and-down motion] up and down with the head and side-to-side. [Laughs].

Dead Rhetoric: If I told you in 1997 that you’d last another 20 years and be even more successful, what would you have said?

Ellsworth: I would have given you one of those patented laughs I have. “Thanks a lot, kid!” [Laughs] It’s 20 years now…there was never a long-term plan. We would plan years. We would plan a series of activities we would do to get to that next project. And those series of activities are quite simply, write, record, promote, touring. Then repeat. Then repeat. It wasn’t really anything that regardless of what was going on around us or what other people’s plans are, ours were always a working man’s ethic. Sure, we get our two weeks paid vacation every year where we take the wives and kiddies to the beach and play with the beach balls and drink cheap domestic beer. [Laughs]

Dead Rhetoric: I’m trying to get the mental picture of you guys at the beach…

Ellsworth: It’s true, though. D.D. lives at the beach, my pop has always had a house at the beach, so it’s part of our culture, believe it or not. Not the Jersey Shore kind of thing. But, I think it was just a work ethic. I think if you have a work ethic, you don’t try to diagnose it and go “Because of our work ethic, or because of my work ethic, that will mean we will last another 20 years and be more popular 20 years from now.” You don’t think of that; you think of your next show in Pittsburgh. You think of what are we going to do in 2018 in terms of running our cycle again and how are we going to place the activities to run that cycle. So I think when you look at it that way, it only makes sense 20 years more happened. It’s simplified. It’s not over-complicated. Anybody who wants to complicate rock and roll in this fucking business is bound to fuck it up.

Dead Rhetoric: Another thing you have mentioned before is that you always took it record-to-record. Here we are today.

Dead Rhetoric: You can’t kill it.

Ellsworth: Right, you can’t really kill it. You can stop listening to it, you can stop supporting it. The heart of it beats somewhere on the face of the earth. I think that’s mentioning pride, that’s one of the proudest things that I have in my career is the fact that I’m involved with something that means so much to, let’s say, not the masses, but the committed minority.

Dead Rhetoric: You and D.D. have been around since the beginning of the band. What’s the best way to describe your working relationship with him?

Ellsworth: I think, first of all, we don’t talk about it so much. We just do it. Obviously, we have to talk when a problem comes up, but it works because I think even though we met when the band started, we became friends after that. That really becomes the reason you don’t have to talk about it. You probably have people in your life that you know you can depend on that guy. You don’t have to tell him “You got to be here by three.” Or “You have to do this.” Or “I want you to do this with your abilities or talent.” They just do it. And I don’t think that’s a surprise, but you come to rely on something to some degree, blindly. And I think that’s why it works because, again, if you over-complicate shit, you fuck it up. We talk more football than Overkill.

Ellsworth: He’s cut out for this. It’s funny, I know he did Shadows Fall, but I knew him before Shadows Fall.

Ellsworth: He’d hang out, put drum sticks in his back pocket, waiting for Tim to drop dead on stage. “Move the body, I can handle it.” [Laughs] But, I never called him a drum groupie. The person I was talking said “Was he your first drum groupie?” And I laughed and said “I guess so!” But he fits in because he’s cut out for this. Eddy [Garcia] helped us out greatly, it was a temporary fix. Eddy wants to do sound and production. Jason just seemed like the natural choice. By the end of the phone call, it was like “Hang on. I got to talk to my wife.” [Laughs] He’s worked his way through the business and has a great reputation on his own. You get that great energy and for us, it’s a new dynamic. It’s a good place for all parties.

Dead Rhetoric: Is he throwing out odd-ball set list requests to you?

Ellsworth: You want to hear the fucked-up thing? He knows Overkill better than Overkill. [Laughs] Thirty-years, the last three or four years of sets, we started picking them out, so most I would know. But he comes in and goes “Do you remember this one?” And I go, “I kinda do, but I don’t remember the title.” [Laughs]